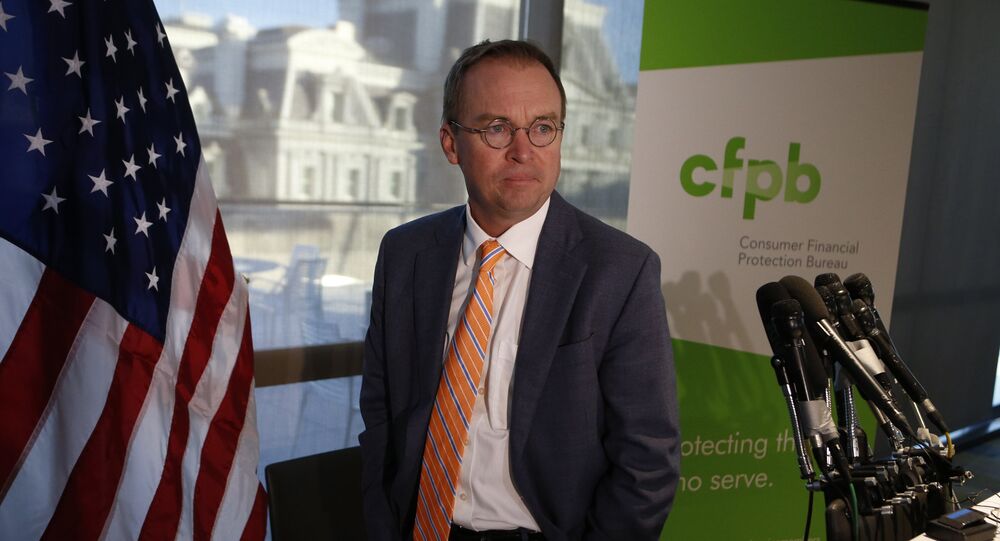 A Tale of Two Bosses: US CFPB Acting Directors Battle With Emails, Donuts

The resignation of a US government consumer protection agency director resulted in an unexpected development as the organization now has two people insisting that they are the real acting head, sparking a storm in Twitter.

The US Consumer Financial Protection Bureau ended up in quite a predicament as the agency suddenly found itself with two acting directors claiming to be in charge.

This peculiar situation arose due the fact that while the former CFPB Director Richard Cordray named his aide Leandra English as the new boss prior to his resignation, US President Donald Trump has also appointed Mick Mulvaney, Director of the Office of Management and Budget, as a temporary head of the organization.

According to Bloomberg, both sides continue to insist that they are the one true acting director: while English sent an email to staff saying that "it is an honor to work with all of you," Mulvaney advised workers to ignore instructions from her and also treated them to donuts.

​Some people appeared to be amused by this diarchy, coming up with humorous suggestions about how Mulvaney and English might resolve their standoff.

The CFPB should just mimic the CFP and do a playoff. English vs. Mulvaney. Last one standing wins.

​Others however rushed to take sides, supporting either English or Mulvaney.

Today's NYT says 2 showed up for work at CFPB…Mulvaney and English. Not really. Mulvaney did and held meetings. English met with Sens. Schumer and Pocahontas to have a whine in. Never went to the office. I'll take the one appointed by the Prez. pic.twitter.com/c8ktFaoSnO

Trump is in control of #DefendCFPB, which creates another great triggering of the left.

Mick Mulvaney: Put her on "ignore" and stop by for a donut. 🔥👏🏻😎 pic.twitter.com/vgPA4JM63B

You can't make this stuff up!

Leandra English sued Trump over his appointment of Mick Mulvaney

Mick then shows up with Dunkin' Donuts

For someone who is critical of the Consumer Financial Protection Bureau, he seems pretty jazzed to show up to work#DefendCFPB & send him home pic.twitter.com/Igdr1hfRuP

It's obvious Leandra English is the acting director. If Mick Mulvaney wants to be in charge, he needs to pass congressional approval, like any other director.