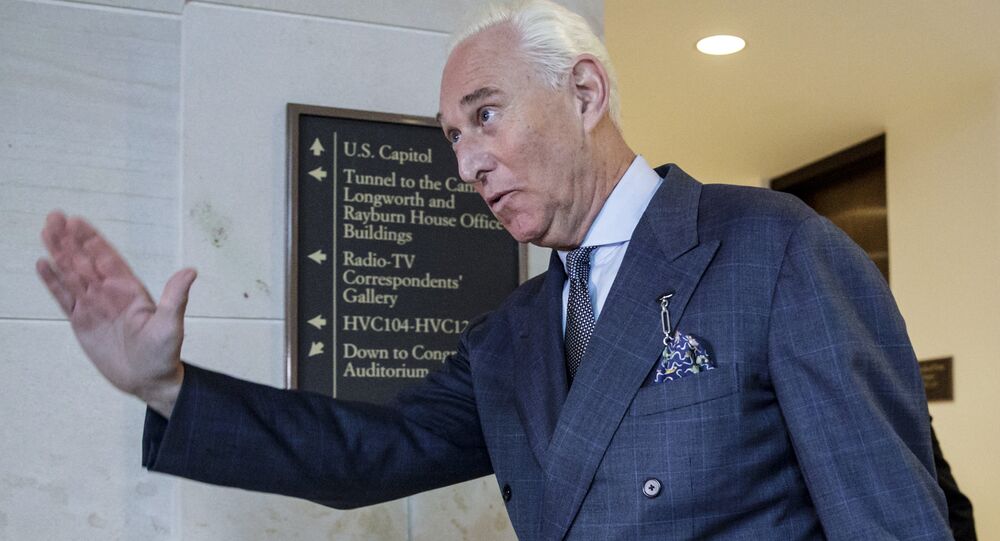 Many key figures in Donald Trump's presidential campaign have incurred sizeable legal fees as a result of ongoing investigations into allegations of Russian meddling in the 2016 US election. Adviser Roger Stone has gone so far as to email supporters asking for financial assistance.

Roger Stone, longtime adviser to US President Donald Trump, is allegedly facing almost US$460,000 in legal fees incurred, since landing in the cross hairs of federal and congressional investigations into alleged Russian interference in the 2016 US election.

In a 1,600 word statement emailed to press and supporters, Stone called special counsel Robert Mueller a "deep state vigilante" and "executioner" who was "busy casting about for anything he can latch onto."

He is "certain" Mueller intends to "remove" the president from office, in collusion with Democrats, "many of whom are openly plotting a literal coup d'etat against the President of the United States."

Roger Stone sent out a 1,600-word statement asking for donations for his legal defense fund. Calls Mueller a "deep state executioner” and “deep state vigilante” and says his legal fees have reached $457,000. https://t.co/aW5DH0FbcQ

​"I am not a wealthy man, by any means. Such crushing expense, with nothing to show for it except my vindication against a juggernaut of political dirty tricks and lies, threatens to destroy me and my family financially — all because I fought to elect Donald Trump. All because the deep state partisans know I will continue fighting for his agenda," Stone wrote.

Stone, whose contact with hacker Guccifer 2.0 and WikiLeaks founder Julian Assange before the election has come under scrutiny in the investigations, said it cost him U$400,000 in legal fees to prepare for his September testimony before the House Intelligence Committee — a probe he called at the time a "political exercise."

Stone admitted to speaking to both, but argued his communications were entirely properly and legal, and not part of any effort to collude with a foreign power. While he refused to name the person who connected him with Assange, he said it was a journalist, who he couldn't name a their conversation was "off record."

Stone is also a "person of interest" to Senate Intelligence Committee investigators, but they are yet to formally invite Stone to testify.

"I've yet to testify before the US Senate Intelligence Committee and anticipate the legal representation I require for that exchange will easily put my legal bills even closer to the million dollar mark. I hope you will consider contributing anything you can. You can do so your contribution of $25, $50, $100, $250, $500, $1000 or more would be a Godsend," Stone added.

Stone is not the only individual in the president's circle of trustees facing sky-high legal fees as a result of the investigation.

JD Gordon, national security official on the Trump campaign, told Business Insider while Trump's reelection campaign and the Republican National Committee were "taking care" of the president and his son Donald Trump Jr., "the rest of us who aren't billionaires must fend for ourselves." Federal Election Commission filings showed the Trump campaign spent over US$1.1 million on legal fees July — October.

"In my case, representing the campaign to speak to a group of over 50 foreign ambassadors during the RNC in Cleveland, combined with ensuring our campaign's national security policies were reflected in the GOP platform the week prior, have led to nearly five-figure personal legal bills," he said.

Gordon in particular has been quizzed about the watering down of an amendment to Republican policy on Ukraine in July 2016 — originally, it proposed the GOP commit to sending "lethal weapons" to the Ukrainian army, but the wording was altered to "appropriate assistance" in the party's official platform.

"Another early Trump campaign adviser, Michael Caputo, told reporters recently that he had to take $30,000 out of his children's college fund to pay for lawyers that can charge as much as $1,000 per hour." https://t.co/GbpxKjCZLS

​Another Trump campaign adviser, Michael Caputo, has been forced to take US$30,000 out of his children's college fund to pay for lawyers — he is a person of interest apparently due to his Ukrainian wife, and previous work as a media consultant in Russia during the 1990s.

The family of former national security adviser Michael Flynn has also set up a defense fund in September, to pay legal fees that may exceed US$1 million.

Republican Matt Gaetz of Florida has introduced legislation pressuring Mueller to resign — and in a speech on the House floor November 8, he suggested the US was "at risk of a coup d'etat."

"We are at risk of a coup d'etat in this country if we allow an unaccountable person [Mueller] with no oversight to undermine the duly-elected president of the United States. That is precisely what is happening right now with the indisputable conflicts of interest that are present with Mueller and others at the Department of Justice," he said.

Worth 7 minutes of your time.
GOP Rep. Gaetz: "We Are At Risk Of A Coup,"
Mueller Must Resign Or Be Fired https://t.co/FDOqYwMGFF

​Gaetz has also called for a special prosecutor to investigate the Uranium One scandal, the Clinton Foundation, and research firm Fusion GPS, which produced the "dodgy dossier" alleging Trump-Russia collusion, which was paid for by Obama for America's law firm, the Democratic National Committee (DNC), and the Hillary Clinton presidential campaign.