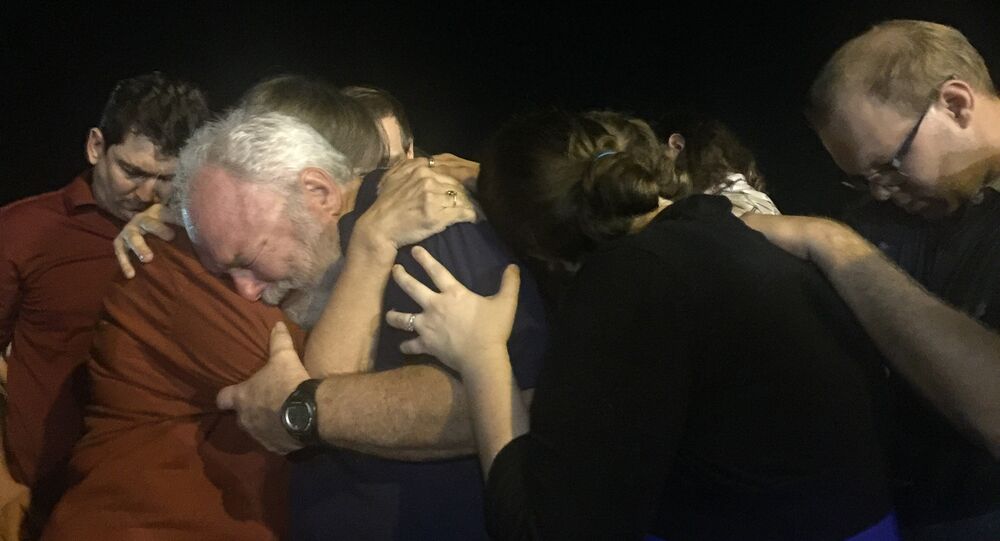 Several hundred people came to La Vernia high school stadium to pray and grieve together despite the windy and chilly weather.

SUTHERLAND SPRINGS, (Sputnik) — A vigil to mourn the victims of the Texas church shooting, and to support those affected by the tragedy, was held on Tuesday evening at the local school. The relatives of the victims, friends and neighbors, as well as people from other Texas towns were embracing each other, cried together, shared their feelings with each other and prayed.

One of the event's organizers and member of the Cowboy Fellowship of Wilson County, Kaci Messenger, told Sputnik that it was the initiative of the church's pastor to hold Tuesday's vigil.

I'm here at La Vernia High School where people are gathered to remember those affected by Sunday's shooting. pic.twitter.com/nzOpDz3qFl

"Our pastor Chris Kirkham is the one who organized it. It was supposed to be in the auditorium of the school, but it became so large that we needed to come out to the stadium," Messenger explained.

According to Messenger, the school helped with the organization as well as various churches throughout San Antonio and the vicinity.

The vigil on Tuesday follows the two vigils on Sunday and Monday.

Third vigil in as many nights about to begin in Lavernia for victims of nearby Sutherland Springs shooting @wfaa pic.twitter.com/HaUzlRfxSP

"We are very close, Texans wanted to come together. You cannot stop after one day. You have to keep going because there are so many times that people need the support of their community long after something happens," Messenger said.

She added that on Wednesday night they would hold another vigil at the Floresville High School stadium.

On Sunday, gunman Devin Kelley opened fire at the First Baptist Church in Sutherland Springs, killing at least 26 people and wounding 20 others. The Texas Department of Public Safety said it is investigating the motive in this case.

Moment of silence for la Vernia and lytle..🖤💛🖤 pic.twitter.com/m3LLDP03cw

Messenger said that when the shooting occurred, she was in the service at the other church, which is just a couple of miles away.

"It was a shock. You cannot even explain it. There is no explanation. You are just in shock," she recollected her feelings when she learned about the shooting.