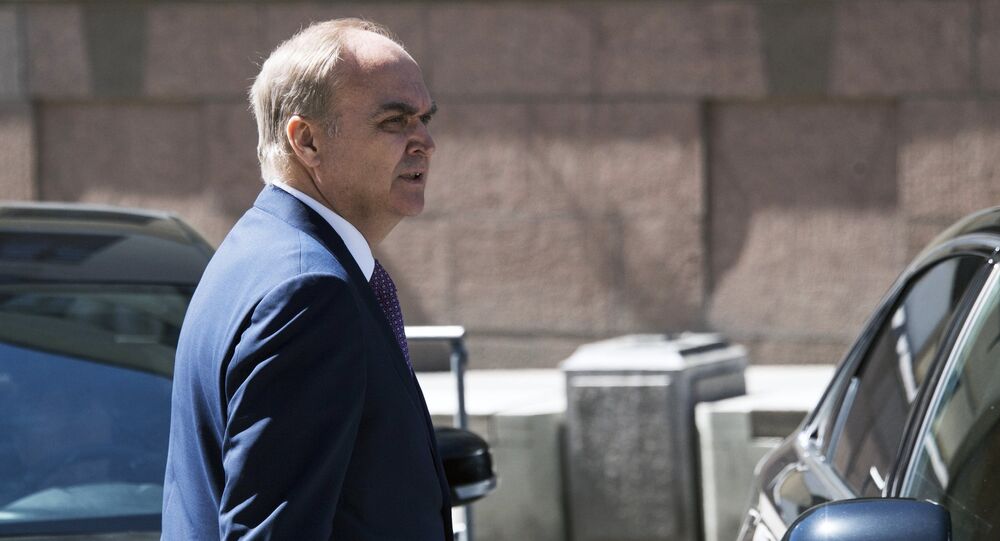 Rex Tillerson and Russian Ambassador to the United States Anatoly Antonov have discussed the fight against terrorism.

WASHINGTON (Sputnik) — US Secretary of State Rex Tillerson and Russian Ambassador to the United States Anatoly Antonov met to discuss defeating the Islamic State terrorist group (also referred to as ISIS, ISIL or Daesh in Arabic) in Syria and reaffirmed their commitment to the Geneva peace process, State Department Spokesperson Heather Nauert said.

"The two also discussed the defeat of ISIS in Syria and the United States’ continued commitment to the Geneva talks as the best path toward a political solution to the conflict," Nauert said after the meeting.

The diplomats also discussed implementing the Minsk accord and countering the North Korean threat, Nauert added.

© Photo : Russian Defense Ministry
US Recognizes Russian Policy Proven Best in Backing Syria to Crush Daesh
"Other topics included countering the threat posed by North Korea and the prospects for improving our bilateral relationship," she said.

Spokesman of the Russian Embassy in the United States Nikolay Lakhonin said that Anatoly Antonov at the meeting noted the frustrating state of bilateral relations between Moscow and Washington.

"During the meeting, Ambassador Antonov noted the frustrating state of the bilateral relations, the deficiency of the US policy of sanctions based on unsubstantiated accusations of Russia’s interference in the US presidential election," Lakhonin said.

According to the spokesman, the ambassador urged to "review this unconstructive policy," and stressed that Russia and the United States as the two largest nuclear powers and permanent members of the UN Security Council bear special responsibility for the international peace and security.

Earlier in the day, the Treasury Department announced in a directive that the United States has banned providing goods, services or technology for projects with Russia related to deepwater, arctic offshore, or shale exploration or production.

Last week, Tillerson provided Congress with a list of entities and individuals that should be targeted under the latest round of anti-Russia sanctions.

© AP Photo / Vahid Salemi
US Expands Sanctions on Iran's Islamic Revolutionary Guard Corps
Also, Antonov transferred to the US Secretary of State the statement adopted by the Russian Federation Council (the upper house of parliament) on the Iranian nuclear deal.

The Federation Council approved the statement in late October, stressing that the possible US withdrawal from the deal could bring "irreparable damage" to the efforts of maintaining the nuclear nonproliferation regime.

Moscow: US Staging Fatal Provocations Against Russian Personnel in Syria