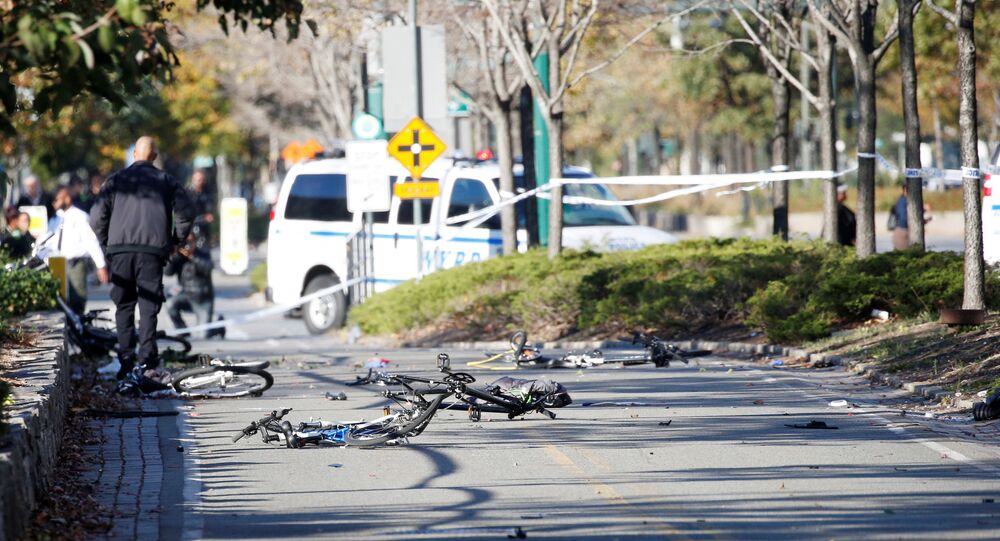 New York City's mayor, governor and police commissioner confirmed in a press briefing that eight people had been killed in a truck ramming attack Tuesday perpetrated by a 29-year-old man described as a "lone wolf." The incident, they said, was an act of terrorism.

© REUTERS / Andrew Kelly
Terrorist Attack in New York City Kills at Least Eight, Injures Dozen More (PHOTOS)
New York City Mayor Bill de Blasio, New York Governor Andrew Cuomo and New York Police Commissioner James O’Neill spoke at a press briefing roughly two hours after the attack. They confirmed that six men were declared dead at the scene of the attack, which occurred just after 3:00 p.m., and that two more people had died while being transferred to hospital. Eleven other people are being treated for serious but not life-threatening injuries.

​In the days ahead, a heavy police presence will be present, he said, cautioning residents not to be concerned.

Acknowledging that the city has gone through similar incidents before, Cuomo asserted that New Yorkers will move forward as they have done in the past, a clear allusion to the 9/11 attacks of 2001 that killed roughly 3,000. The official also added that no indication of a "wider plot" or scheme "beyond lone wolf attack in New York" was present.

Offering some insight into the series of events that took place earlier Tuesday, O'Neill explained the suspect began driving south in a truck on the Lower Manhattan bike path until he crashed into a school bus. Two children and two adults were inside the bus at the time and were injured. Following the clash, the 29-year-old male exited the Home Depot truck brandishing "two handguns." A paintball gun and a pellet gun were retrieved from the scene after the suspect was shot.

O'Neill later indicated during a question-and-answer session in the briefing to announce the suspect is currently hospitalized. The commissioner added that the suspect's statement's were "consistent" with a terrorist attack. According to eyewitnesses on the scene the suspect yelled "Allahu Akbar," Arabic for "God is Great," once stepping out of the car.

Shortly after the briefing, CBS and NBC news identified the suspect as Sayfullo Habibullaevic Saipov, 29, of Tampa, Florida. Early reports say the suspect is from Uzbekistan.

US President Donald Trump has been briefed on the attack and took to Twitter to describe the assailant as "sick."