The US government has released thousands of files relating to the assassination of John F. Kennedy. Sputnik takes a look at some of the juiciest information about the 20th century's most infamous murder.

President Donald Trump has agreed to release 2,800 classified files, claiming the US public deserved to be "fully informed" about the assassination of then-president John Fitzgerald Kennedy on November 22, 1963 in Dallas, Texas, and the supposed assassin Lee Harvey Oswald, who was himself shot dead a few days later by a shady character called Jack Ruby.

These are some of the best nuggets from the files, which historians and journalists are still poring over. 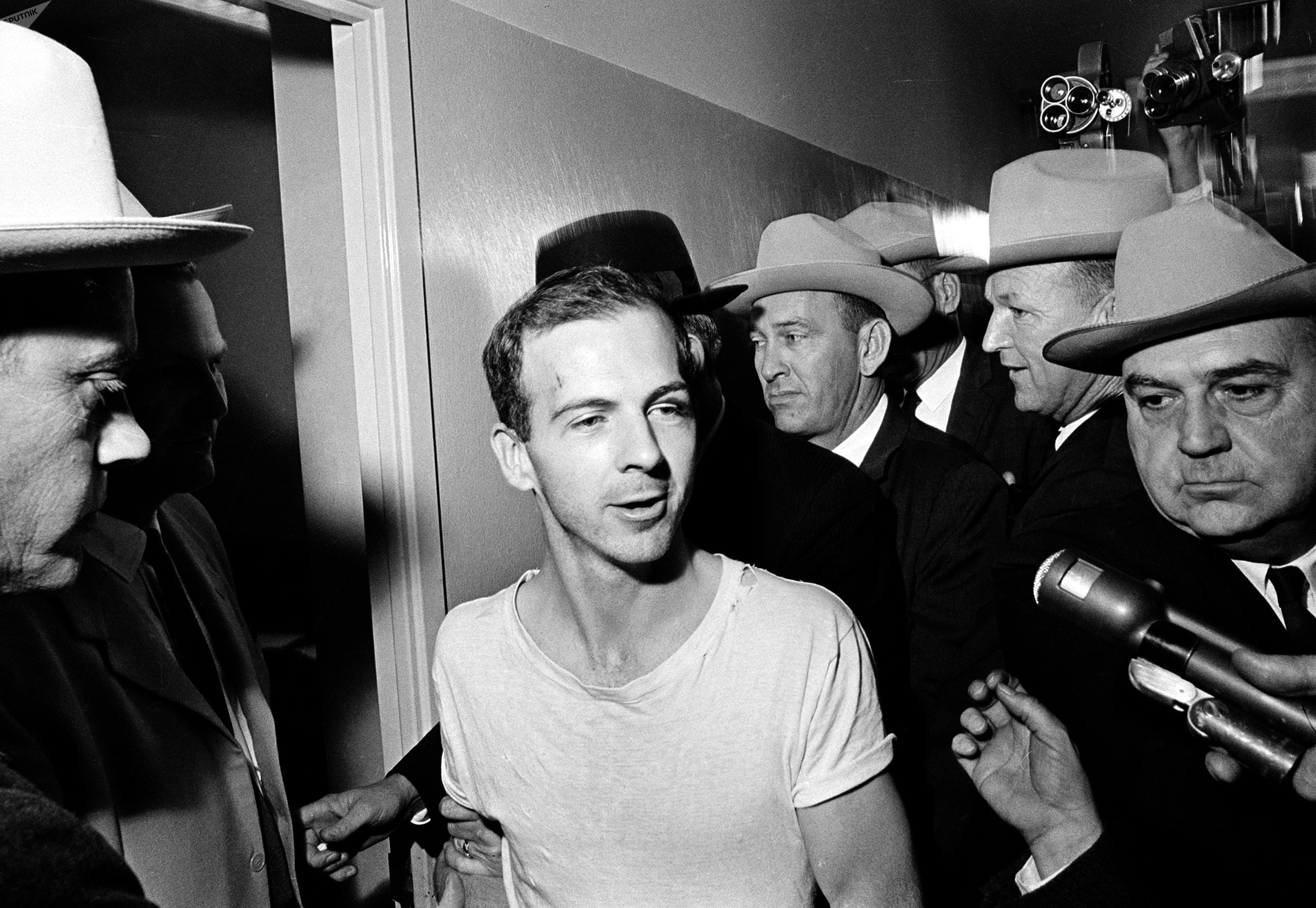 © AP Photo /
Surrounded by detectives, Lee Harvey Oswald talks to the press as he is led down a corridor of the Dallas police station for another round of questioning in connection with the assassination of US President John F. Kennedy, November 23, 1963.

1. Oswald Spoke to a KGB Agent in Mexico

A memo from the CIA suggests Oswald had spoken with a KGB officer based at the Soviet embassy in Mexico City two months before the assassination.

The memo said the officer, Valeriy Kostikov, worked for the KGB's 13th Department which was "responsible for sabotage and assassination."

The memo goes on to say the Soviet Union had been asked to clarify why Oswald had gone to their embassy in Mexico on September 28, 1963 and had told US authorities it was to get help for a US passport application, possibly for his Soviet-born wife Marina.

RR Auction
Marina Oswald Porter wrote a five-page letter to the auction house to be sure details were passed along to the new owner.

One of the most bizarre titbits of information in the files is that an anonymous caller apparently rang a local newspaper in Cambridge, England, and tipped them off before the assassination.

The memo, from the CIA's base at the US Embassy in London, says a senior reporter at the Cambridge News took a phone call from a man 25 minutes before the assassination.

The man did not specifically mention JFK, but said the reporter should contact the US Embassy for some "big news."

"After the word of the President's death was received the reporter informed the Cambridge police of the anonymous call and the police informed MI5. The Cambridge reporter had never received a call of this kind before, and MI5 state that he is known to them as a sound and loyal person with no security record," said the memo.

3. FBI Tipped Off Police About Threat to Oswald

One memo revealed the FBI had warned Dallas police that someone planned to kill Oswald.

"We at once notified the chief of police and he assured us Oswald would be given sufficient protection," said then-FBI director J. Edgar Hoover.

Despite that, no security cordon was set up in the basement of Dallas Police Department and Oswald, a former US marine, was shot dead by Jack Ruby in full view of the TV cameras. 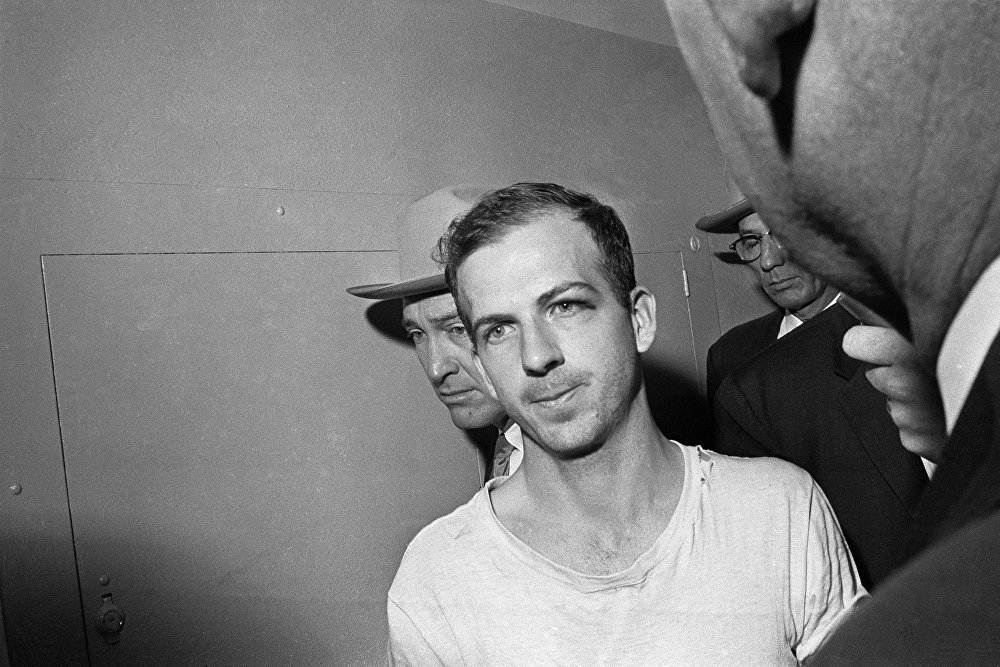 © AP Photo /
In this Nov. 23, 1963 file photo, Lee Harvey Oswald is led down a corridor of the Dallas police station for another round of questioning in connection with the assassination of US, President John F. Kennedy. Oswald, who denied any involvement in the shooting, was formally charged with murder.

4. Soviet Union Was Put on 'Alert' Because of Fear of US Coup

Another fascinating memo discusses the international reaction to the assassination in its immediate aftermath, and especially the response in the Soviet Union.

It says Soviet officials feared the assassination was part of a sophisticated conspiracy by a right-wing element within the US military-industrial complex and the USSR was put on "national alert."

The Soviets feared an "irresponsible general" in the US would launch a missile at the Soviet Union, claiming to the American people that they were retaliating for the assassination of the president by a Soviet agent, Oswald.

Ordinary Soviet citizens reacted with "shock and consternation" at the assassination, says the memo, and church bells were rung in memory of President Kennedy.

5. Vice President Lyndon B. Johnson 'Had Been in KKK'

Several JFK conspiracy theories over the years have claimed his Vice President, Lyndon B. Johnson, was "in on it" and had prior knowledge of the assassination.

Conspiracy theorists have suggested the CIA wanted Johnson to be president and believed he would take a different stance on key issues, like Cuba, Vietnam and civil rights.

© AP Photo /
President Lyndon B. Johnson holds a pen as he kisses his wife, Lady Bird Johnson during a bill signing at the White House, Oct. 16, 1968

One of the newly released files contains a memo about Ned Touchstone, a journalist and editor of the right-wing The Councilor, the newsletter of the racist White Citizens' Councils.

Touchstone claimed the Ku Klux Klan had documentary proof that LBJ had been a member of the Klan in the early days of his political career in Texas.

As it turned out LBJ actually accelerated civil rights for African-Americans after he took over, which would be quite a U-turn for a former Klansman. 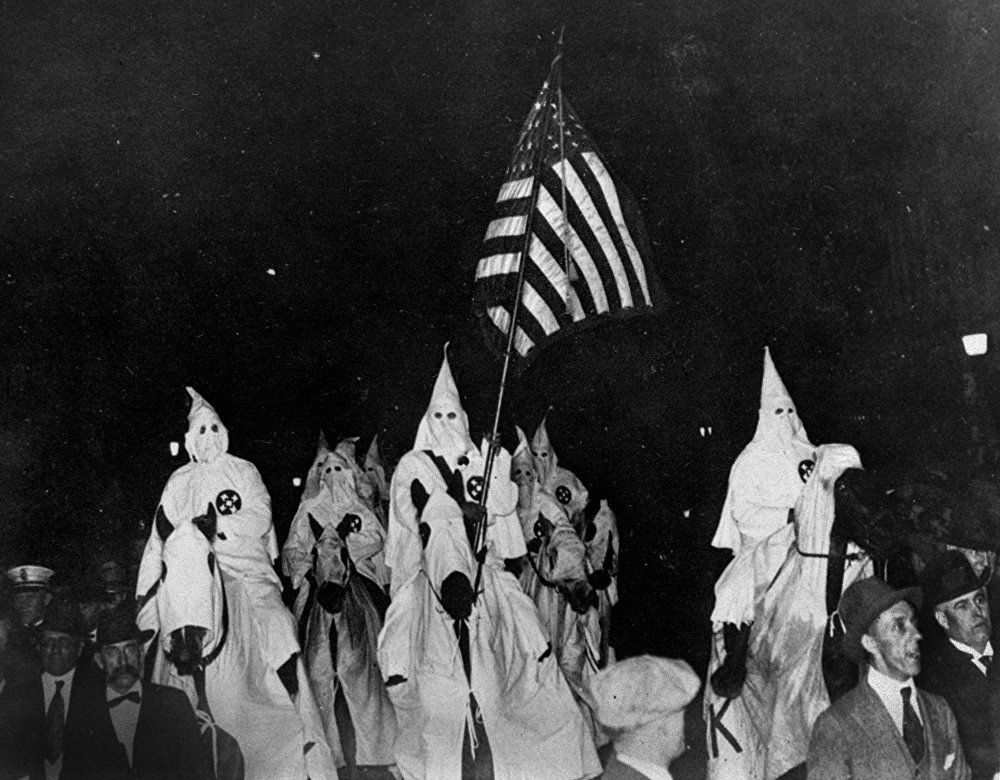 © AP Photo /
In this September 21, 1923 file photo, members of the Ku Klux Klan ride horses during a parade through the streets of Tulsa, Okla.

6. The Hunt for the Stripper With a Heart of Gold

In the aftermath of Jack Ruby shooting Oswald, the FBI went into overdrive, trying to track down known associates of Ruby in the Dallas underworld who could shed light on him.

One of those they tried to track down was a stripper known as Kitty, who was identified by another semi-naked dancer known as Candy Cane as being close to Ruby.

A New Orleans stripper called Kitty Raville or Kitty DeVille was identified, but it turned out she had committed suicide in August or September 1963.

There is also a passing mention of Joseph Civello, head of the mafia in Dallas, who was known to have attended the infamous Apalachin Meeting of mob bosses in 1957. Conspiracy theorists have long speculated that the mafia killed JFK because of his failure to regain their casino investments in Cuba.

7. Was JFK Involved in Sex Parties With Frank Sinatra?

The investigation into the assassination inevitably unearthed a mountain of dirt on the president himself who, despite his squeaky clean image, was known to be a voracious womanizer who reportedly had an affair with Marilyn Monroe.

© AP Photo / Matty Zimmerman
Marilyn Monroe poses over the updraft of New York subway grating while in character for the filming of "The Seven Year Itch" in Manhattan on September 15, 1954

One document, from 1960, describes the efforts Confidential magazine went to while "looking for dirt on Kennedy and (actor Peter) Lawford."

Sue Young, a high class call girl in Hollywood, told agents in the FBI's Los Angeles office that a sleazy private detective called Fred Otash had been asking her about whether she participated in "sex parties" with soon-to-be President Kennedy, Lawford and singers Frank Sinatra and Sammy Davis junior, who were part of the so-called Brat Pack.

8. Fidel Castro Unlikely to Have 'Risked' Involvement in Assassination

Another obvious suspect after the assassination was Cuba and its revolutionary communist leader, Fidel Castro.

© AFP 2019 / TOMMY WEBER
Cuban Prime Secretary of the Cuban Communist party and President of the State Council Fidel Castro addresses delegates of the General Assembly of the United Nations, 26 September 1960 in New York

Castro was still fuming after Kennedy backed the doomed Bay of Pigs invasion in 1961. But a report by the House Select Committee on Assassinations found highly unlikely Castro would have taken the risk of trying to kill Kennedy even though the CIA were continually targeting the Cuban leader for assassination.

"The Committee does not believe Castro would have assassinated President Kennedy, because such an act, if discovered, would have afforded the United States the excuse to destroy Cuba. The risk would not have been worth it," the report said.

9. The Strange Link Between Jack Ruby and Oswald's 'Other Victim'

One of the people who is often forgotten during discussion of the assassination is Dallas Police Officer J.D. Tippitt.

Tippitt was on patrol in the Oak Cliff suburb of Dallas 45 minutes after the assassination when he spotted a man who fitted the description of the assassin, which had been put out on the police radio. Tippitt confronted the man, who shot him dead. An eyewitness identified the man as Lee Harvey Oswald.

A 1964 memo suggests FBI head J. Edgar Hoover ordered agents to investigate whether Officer Tippitt had met Jack Ruby at the latter's strip joint, the Carousel Club, before to the assassination. Ruby died of cancer in 1966.

10. The Unanswered Question About Oswald Being a CIA Agent

Perhaps the most titillating file of all contains a transcript of a deposition given by CIA Director Richard Helms in 1975. But right at the end, David Belin, on behalf of the Warren Commission, asks if the CIA was "conspiratorially involved" in the assassination of the President.

"Is there any information involved with the assassination of President Kennedy which in any way shows that Lee Harvey Oswald was in some way a CIA agent or agent," asks Belin.

The document cuts off before Helms' reply, suggesting it has been redacted.