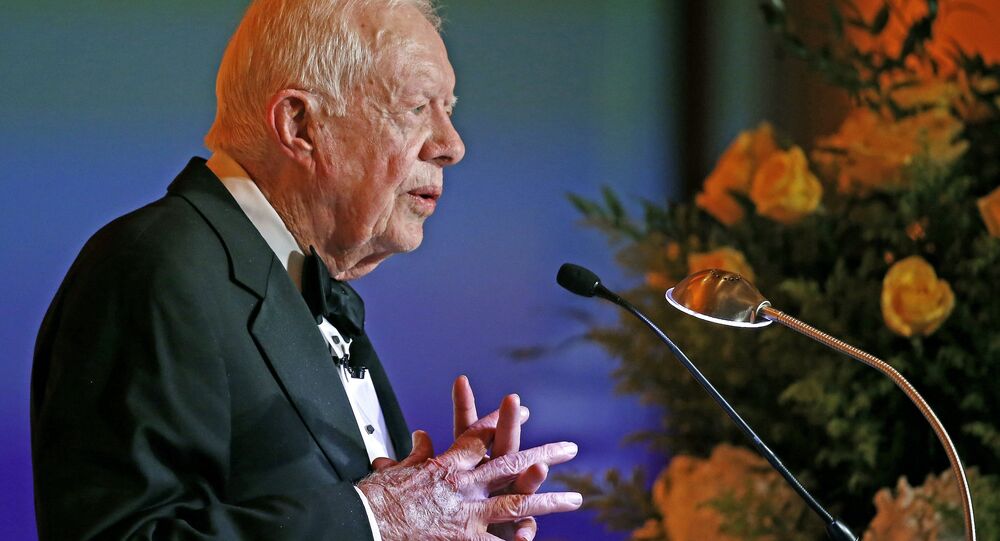 If the United States is in need of a peacemaker in the country's talks with North Korea, a former US president has volunteered for the job.

MOSCOW (Sputnik) — Former US President Jimmy Carter told The New York Times newspaper on Saturday that he would be ready to travel to North Korea for peace talks, if there was a need, but the White House's response had been negative so far.

Carter added that he was afraid of the threats being exchanged between US President Donald Trump and North Korean leader Kim Jong Un and had already spoken to National Security Adviser H.R. McMaster about his readiness to travel to North Korea.

"I told him that I was available if they ever need me," Carter was quoted as saying.

The former president called for a diplomatic mission earlier in October. In an op-ed published in the newspaper The Washington Post on October 5, Carter said that Washington should offer to send a high-level delegation to Pyongyang for peace talks.

The relations between the US and North Korea have further escalated this week, after the start of the joint American-South Korean military drills east of the Korean peninsula. Forty US and South Korean warships, including the USS Ronald Reagan supercarrier, along with US Air Force B1-B strategic bombers, were deployed across an area stretching from the Yellow Sea to the Sea of Japan.

Speaking at a conference on nuclear non-proliferation in Moscow on Friday, Choe Son-hui, director of the North Korean Foreign Ministry's North American Department, spoke about the "constant nuclear threat" from the US and explained Pyongyang's recent nuclear and missile tests as an attempt to "achieve a balance with the United States, so they do not dare talk about any military actions against the DPRK." He added that the country was trying to reach parity with US nuclear potential.