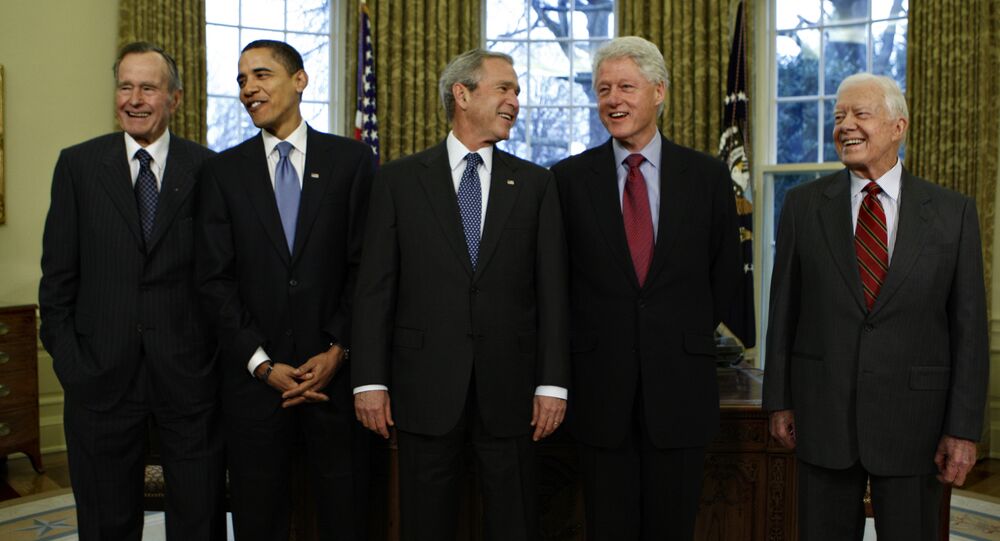 On Saturday night, all five living former US presidents, minus current POTUS Donald Trump, will attend a disaster relief event in the city of Austin, Texas.

In an effort to raise money for disaster relief in the wake of Hurricane Harvey, Irma and Maria and the destruction the three storms caused in Texas, Florida, Puerto Rico and the US Virgin Islands, former US Presidents Barack Obama, George W. Bush, Bill Clinton, George H.W. Bush and Jimmy Carter will make an unprecedented group by convening in the Texas capital for the concert.

The unusual gathering is seen as a rebuke to Trump, and it is not known whether he will attend or has even been officially invited, according to Stars and Stripes.

The Saturday concert will take place at the Reed Arena at Texas A&M University, home to the presidential library of the elder Bush, and will include performances by Texas natives Lyle Lovett and Robert Earl Keen, as well as country music band Alabama, legendary soul singer Sam Moore and noted gospel artist Yolanda Adams, according to the Associated Press.

"Presidents have the most powerful and prolific fundraising base of any politician in the world, stated University of Houston political science professor Brandon Rottinghaus, cited by AP.

"When they send out a call for help, especially on something that's not political, they can rake in big money," Rottinghaus added.

As the Trump administration is noted to have been slow to bring aid to storm-ravaged Puerto Rico, the US president has occupied himself instead with tweeted accusations that members of the island's government displayed "poor leadership," and that "electric and all infrastructure was disaster before hurricanes."

Trump capped off a series of, at best, insensitive commentary by tweeting that Federal Emergency Management Agency (FEMA), emergency personnel and US military entities could only provide help to beleaguered residents for an undisclosed, but apparently brief, period.

Rottinghaus noted that the five former US presidents attending the concert would be viewed more favorably than Trump, as "ex-presidents are able to step back and be seen as the nation's grandfather," cited by Stripes.com.

The OneAmericaAppeal.org website accepting tax-deductable donations has pledged that 100 percent of proceeds will go to hurricane relief.

The gala performance — Deep from the Heart: One America Appeal Concert — will stream live Saturday, October 21st, beginning at 7 p.m., central US time.