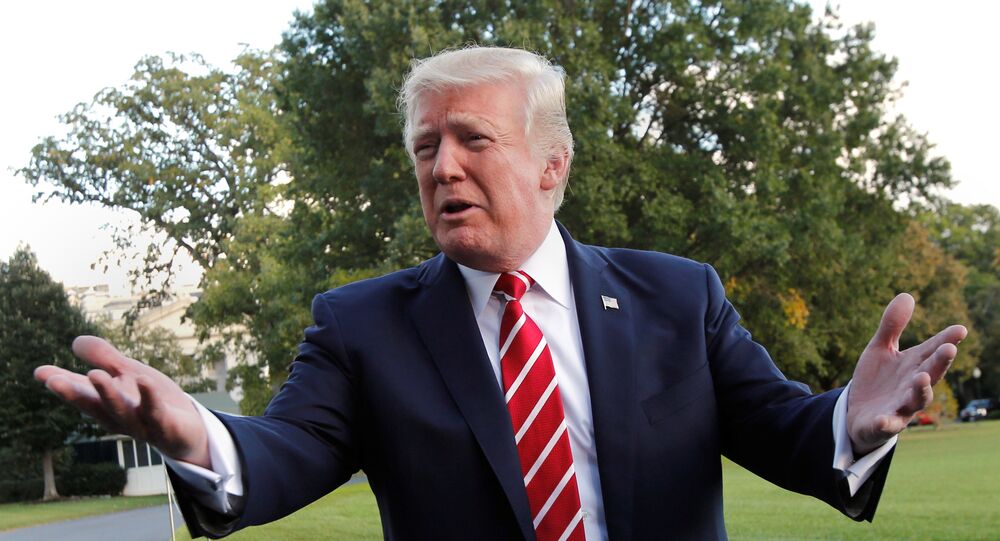 US President Donald Trump has publicly questioned who paid for the incendiary and unverified dossier alleging his deep connections to Russian actors. The dossier, compiled by political research firm Fusion GPS, has been under federal investigation since it leaked in January - but neither its funder nor its claims have been publicly verified.

"Workers of firm involved with the discredited and Fake Dossier take the 5th. Who paid for it, Russia, the FBI or the Dems (or all)?" Trump asked on Twitter Thursday.

This comes just one day after two of the founders of Fusion GPS, Peter Fritsch and Thomas Catan, were called before the House Intelligence Committee (HIC). Both men invoked their Fifth Amendment right to avoid testifying against themselves and refused to answer any of the HIC's questions.

This wasn't a surprise, as Fritsch and Catan had previously announced that they would reply to the HIC's subpoena by refusing to testify. "We cannot in good conscience do anything but advise our clients to stand on their constitutional privileges, the attorney work product doctrine and contractual obligations," wrote Joshua Levy, the head of Fusion GPS' legal team.

Not only would it violate "the First Amendment rights" of Fusion GPS' higher-ups to be forced to testify, Levy went on to write, but it would also damage their ability to conduct "confidential opposition research in an election."

"Should you compel any of our three clients [also including Glenn Simpson, the third Fusion GPS co-founder] to appear at the scheduled deposition, they will invoke their constitutional privileges not to testify," Levy said. "Since that will be the case, we ask that the Committee excuse them from appearing." The HIC had them appear anyway.

In September 2015, Fusion GPS began their investigation into Trump — on behalf of an anonymous Republican donor, hoping to prevent the political outsider from becoming the Republican nominee for president. When it became clear Trump would win the nomination, the benefactors of the dossier became Democratic supporters of Hillary Clinton.

The FBI has also entered the equation by investigating the contents of the dossier, which was published online in January by BuzzFeed News. But even before that, the FBI was aware of the then-unpublished dossier — and in October, they reportedly paid former MI-6 agent Christopher Steele $50,000 to continue his investigation. Steele had been retained by Fusion GPS and was one of the main authors of the original dossier.

Allegedly, the FBI never paid Steele. However, he has worked for them in the past, participating in the 2015 investigation into allegations that officials leading the international football federation, FIFA, were part of a massive bribery and fraud ring.

As for Russia, there isn't any evidence that Moscow was involved in the dossier — and it paints Russia in a nefarious light. But Fusion GPS has reportedly worked on behalf of Russian businessman Denis Katsyv to investigate Bill Browder, a billionaire CEO who lobbied for the passage of the Magnitsky Act of 2012.

The Magnitsky Act, opposed by Katsyv and the Kremlin, barred 18 (later raised to 23) Russians from entering the US and froze any assets they had in US banks as a punitive measure in response to the death of Russian lawyer Sergei Magnitsky in 2009. Magnitsky was allegedly murdered for his role in discovering large-scale fraud within the Russian government; the Russian government claims that Browder was in fact behind the fraud that Magnitsky discovered. Fusion GPS denied that their work for Katsyv symbolized any sort of relationship with the Russian government.

Trump has denied all allegations of collusion with Russia, and called for the investigations into such charges to come to an end.

US Lawmaker: ‘Pee Tape’ Dossier Creator Must Turn Over Docs or Face Subpoena

US Senator Demands Testimony From Private Firm Behind Trump Dossier