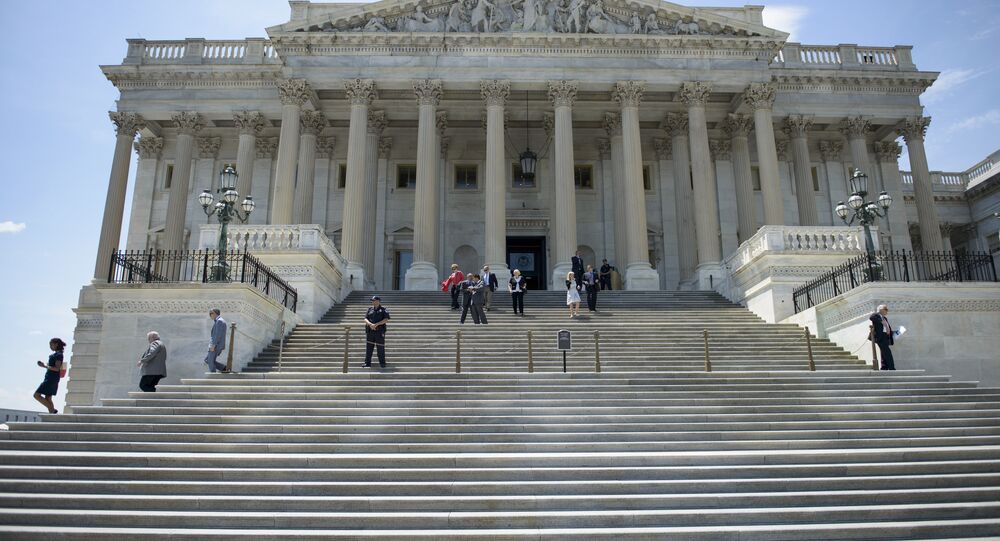 The Daily Caller has reported that the co-founders of Fusion GPS, the research firm responsible for the infamous Trump-Russia dossier published in January, refused to answer any questions during their hearing before the House Intelligence Committee (HIC) on Wednesday.

Peter Fritsch and Thomas Catan, co-founders and heads of Fusion GPS, invoked their Fifth Amendment rights "to every question asked of them," according to an anonymous source "familiar with the matter" cited by the Daily Caller.

The 35-page dossier, which is filled with uncorroborated claims about collusion between Russian actors and US President Donald Trump, was compiled by Fusion GPS and their partner, former MI-6 agent Christopher Steele. They were originally hired by Republicans who opposed Trump in late 2015, but when Trump became the Republican candidate, Fusion's benefactor instead became Democratic supporters of his presidential rival, Hillary Clinton. The HIC is visibly interested in who exactly those supporters are.

The Fifth Amendment of the US Bill of Rights protects individuals from being made to bear witness against themselves in criminal proceedings. The right of protection from self-incrimination, or "pleading the Fifth," is not to be taken as an implication of guilt, as the US Supreme Court has ruled that someone can have "reasonable fear of prosecution and yet be innocent of any wrongdoing."

However, it certainly raises some questions. Earlier in October, Fritsch and Catan's attorney Joshua Levy sent a letter to HIC chairman Devin Nunes (R-CA) claiming that they would not say anything useful during the subpoena, citing both constitutional protections as well as confidentiality agreements with the sources of their scandalous claims.

Levy added that Nunes was was acting "in bad faith" and that "his subpoenas are a clear abuse of power: They are designed to obfuscate the facts and conjure up rank conspiracy theories at the behest of the president and his most obsequious allies in Congress."

Nunes, Levy added, "would rather use his office to learn about who funded opposition research on Donald Trump than whether the Russian government interfered with our election. Americans of all political stripes should find his actions chilling." All told, Levy's letter was 17 pages of attacks on Nunes and the HIC, with only a single paragraph informing them that Fritsch and Catan would be pleading the Fifth.

Congress was undeterred. A congressional official whose name was withheld issued a statement to Fox News saying that "Democrats and Fusion GPS have tried to obstruct every effort to get the facts about the compilation of the Steele dossier and who paid for it, so it's no surprise that Fusion GPS is saying they'll continue to obstruct these efforts. Fusion GPS is clearly paving the way to plead[ing] the Fifth, and Congress is trying to find out if they're trying to hide something."

The FBI has been investigating the Steele dossier, and called on Steele to give them the names of some of his sources in August 2017. Republican congressmen have criticized the FBI's use of the dossier, as most of the salacious charges in it remain unproven and unsupported.

Glenn Simpson, the third Fusion GPS co-founder, met with the Senate Judiciary Committee for 10 hours in August. The contents of that meeting are unknown, but Simpson and Fusion also threatened to plead the Fifth in response to the Senate subpoena.

US Lawmaker: ‘Pee Tape’ Dossier Creator Must Turn Over Docs or Face Subpoena

US Senator Demands Testimony From Private Firm Behind Trump Dossier