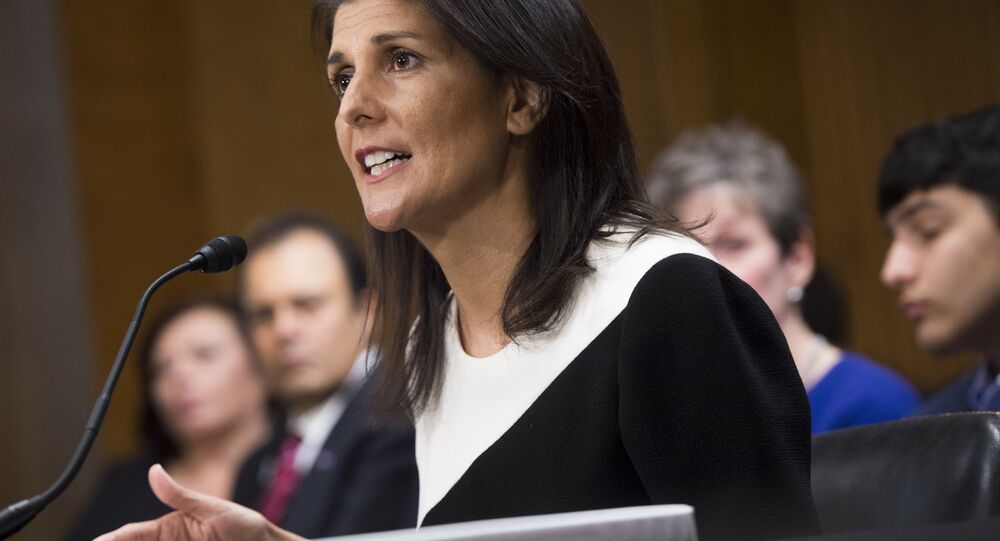 United States Ambassador to the United Nations Nikki Haley has announced the US position on pressing nuclear-related issues, such as Iran nuclear deal and tensions with North Korea.

MOSCOW (Sputnik) — Haley said Sunday that the recent decision of President Donald Trump not to certify Iran's compliance with the nuclear agreement, also known as the Joint Comprehensive Plan of Action (JCPOA), could be a message to Pyongyang.

"So what it says to North Korea is 'don't expect us to engage in a bad deal and also if at any point we do come up with something, expect us to follow through with it, expect us to hold you accountable,'" Haley told NBC News answering a question if Trump's decision could be a message for Pyongyang that there was no sense to be engaged in international negotiations on the nuclear issue.

Meanwhile, US Secretary of State Rex Tillerson has also commented on Washington's stance on the North Korean issue and the Iranian nuclear deal, saying that the United States would continue to follow a diplomatic path with Pyongyang until "first bomb drops." He added that Trump doesn't consider diplomacy a waste of time with regard to North Korea. Trump "has made it clear to me to continue my diplomatic efforts," Tillerson reiterated.

© Sputnik / Vladimir Fedorenko
Trump Shows He Doesn't Abide by Int'l Agreements by Not Certifying Iran Nuclear Deal - Iranian Parl't Speaker
Commenting on Trump's decision not to certify Iran's compliance with the nuclear deal, Tillerson said that Washington would work on Iran nuclear deal with other parties.

After Trump's announcement, Politico's report suggested that it was Haley who was behind the US president's decision on the Iran deal as she has become his "favorite internal voice" on the issue despite alleged opposition from US Secretary of State Rex Tillerson and Pentagon chief James Mattis, who had convinced the US leader to certify the agreement in July.

Many members of the P5+1 group that brokered the historic deal in 2015 yet again stated that they believe Iran is in compliance with the nuclear deal. Commenting on Washington's move, Moscow said that Russia remains committed to the deal, is interested in preserving it and calls on all other participants of the agreement to do the same.