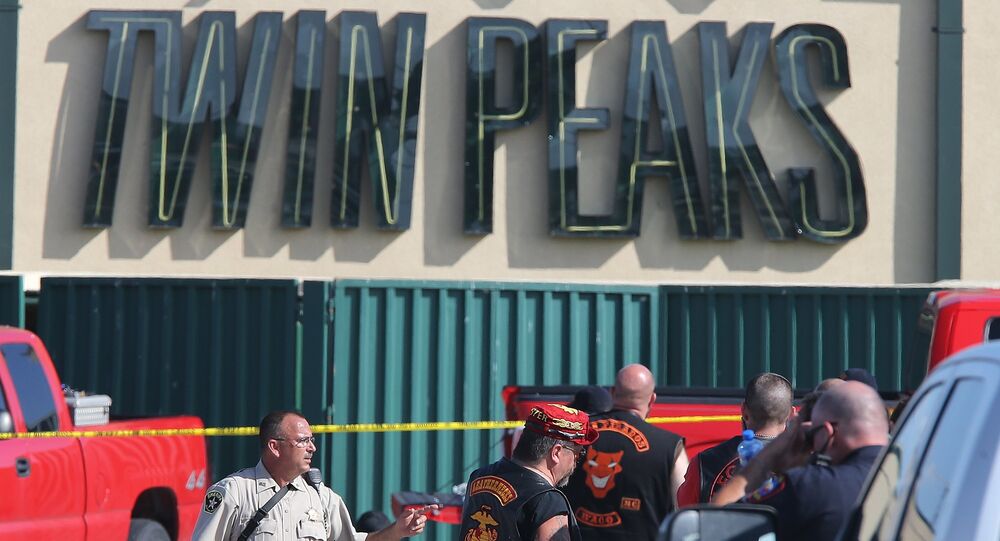 In May 2015, two rival gangs of bikers were involved in a huge shootout at a bar in Waco, Texas which left nine men dead. Sputnik spoke to North American biker gang expert Peter Edwards about what led to the clash and what evidence will be available when the first trial starts.

The first man is set to go on trial this week in connection with a huge 2015 shootout between biker gangs in Waco, Texas, which led to the deaths of nine motorcyclists.

On Tuesday, October 10, jury selection will begin for the trial of Jacob Carrizal, who was one of 177 bikers arrested after the Bandidos and Cossacks clashed at the Twin Peaks bar on May 17, 2015.

Peter Edwards, a biker gang expert and author of The Bandido Massacre, said both gangs dated back to the 1960s and had "strong, fierce identities."

"It was the most violent day in Texas biker history," Mr. Edwards told Sputnik.

He said the Bandidos were the most powerful biker gang in Texas and there had been "serious tensions" with the Cossacks for years.

Carrizal's attorney also asked that witnesses not refer to the motorcycle groups as "gangs," arguing that is a matter decided by jury.

​The Bandidos arrived at Twin Peaks for a meeting of the Confederation of Clubs and found 60 Cossacks there, even though they were not a member of the confederation.

"Exactly why the fighting started isn't clear. In a sense, it doesn't matter anyway as the violence was rooted in emotion, not reason. It could have been over something as minor as a parking spot," Mr. Edwards told Sputnik.

"There were problems over what patches the Cossacks should be allowed to wear. The Bandidos objected to them wearing a 'Texas' patch as they considered this uppity for a minor, largely regional club," he added.

Gunfire was exchanged between the two gangs and two minutes later nine bikers lay dead and dozens were wounded.

​Mr. Edwards explained why Carrizal was the first to go on trial.

A hearing on Monday, October 9, heard that 450 witnesses might be called to testify at his trial, which will be the first of many dating from the Waco shootout.

Mr. Edwards said the prosecutors would draw from a mass of evidence, including camera footage, ballistics and eyewitnesses.

"There were security cameras that were installed in the parking lot by police. There were also some 20 police officers present, as well as members of the general public. I imagine they have phone records as well," he told Sputnik.

Potential jurors for biker Jacob Carrizal’s trial started to fill out questionnaires that defense and prosecutors will review to pick jury.

"I would be surprised if it makes a real impact on biker gangs. They are proud of being bikers and that won't change for most of them. This is part of their culture. It may drive some away but it will attract others," he added.

"Biker gangs have always been boosted by conflict and war. They began as a place for servicemen to find brotherhood and adrenalin after serving in wartime. There are plenty of people returning from conflicts and some of them will natural gravitate towards biker culture," Mr. Edwards told Sputnik.

This truck is parked outside the main juror entrance this afternoon in the Jacob Carrizal Twin Peaks case. pic.twitter.com/agZeUMRNMV

One Bandido was killed — Manuel Rodriguez, 40 — along with Matthew Smith, 27, from the Scimitar gang, and an unaffiliated biker, Jesus Rodriguez, 65.