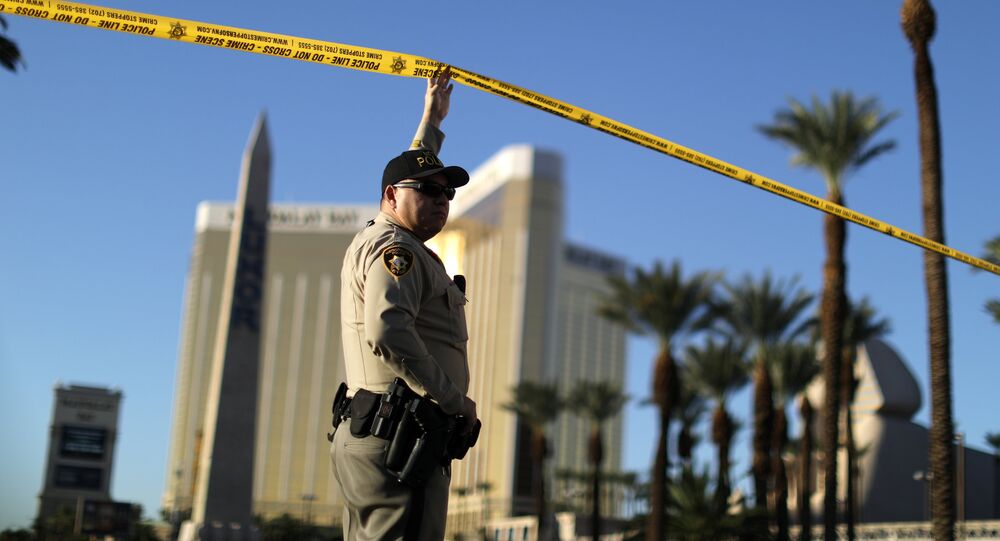 US police have revealed new details on the timeline of the deadliest shooting in US history, which happened in Las Vegas on Sunday, October 1.

The new details suggest that the Las Vegas gunman had shot and wounded a hotel security guard, Jesus Campos, before he opened fire at the Route 91 Harvest Festival visitors, Clark County Sheriff Joe Lombardo said at a news conference on Monday. Earlier it was reported that Jesus Campos had come to Paddock's room amid the shooting, thus stopping his deadly gunfire.

Police then said that after Paddock shot at Campos through the door, he didn't fire any more shots into the crowd.

© AP Photo / Gregory Bull
‘Darkest Days in American History': Illinois Man Erects 58 Crosses in Las Vegas to Honor Victims (PHOTOS)
The authorities now say that the security guard went to the 32nd floor of the hotel to investigate an alarm that went off in another room on the same floor, signaling that a door had been left open. He was shot in the leg through the door of Paddock's room at 9:59 pm and six minutes later, at 10:05 pm, Paddock started firing into the crowd of concertgoers.

In a timeline released last week, investigators said that the shooting lasted for about nine to 11 minutes. Paddock's final shots were fired at 10:15 pm. The first police officers arrived on the hotel floor at 10:17 pm. and saw the wounded Campos at 10:18 pm, who directed the officers to the killer's suite.

By the time the police entered the room, Paddock was dead from a self-inflicted gunshot wound.

© REUTERS / Steve Marcus
Mandalay Bay Massacre Heroes: They Gambled With Their Lives to Rescue Others in Las Vegas
Police said that the gunman had placed security cameras outside his room to survey the hallway and thus saw the security guard.

Sheriff Lombardo said that it is still unknown what made him stop the shooting, which left 58 people dead and over 500 wounded. He added that there is no indication anyone other than Paddock fired on the people.