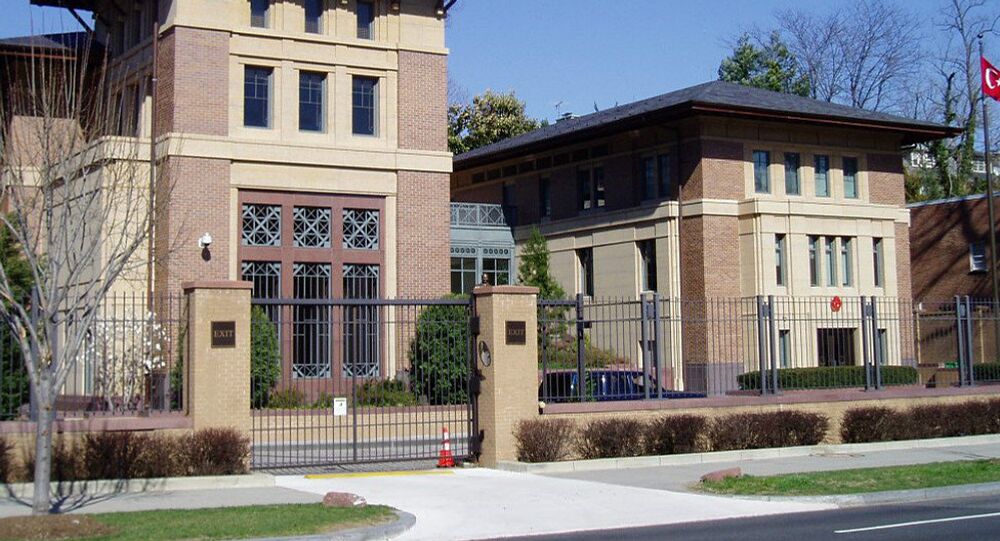 The Turkish embassy in Washington has suspended all non-immigrant visa services, just hours after the US mission in Ankara said it was halting the issuance of visas to Turkish nationals in a tit-for-tat move, which comes amid a brewing diplomatic crisis between the two countries.

"Recent events have forced the Turkish Government to reassess the commitment of the Government of the United States to the security of Turkish Mission facilities and personnel," the Turkish embassy said in a Twitter message posted on its website on Sunday.

Statement from the Turkish Mission to the U.S., October 8, 2017 pic.twitter.com/4i0BwInOCj

​The embassy said the measure would "apply to visas in passports as well as e-Visas and visas acquired at the border."

The message was a carbon copy of the earlier announcement by the US embassy in Ankara.

Statement from the U.S. Mission to Turkey pic.twitter.com/RjTU3BfSXZ

​How It All Began

On Sunday, the US mission announced it was suspending the handling of all regular visa applications following last week’s arrest of a US consulate worker in Istanbul for alleged links to US-based opposition Muslim leader Fethullah Gulen.

The state-run Anadolu news agency identified the US consulate employee arrested on Wednesday on charges of espionage and attempts to overthrow the Turkish government as Metin Topuz.

Topuz, who is a Turkish citizen, is also accused of links to Zekeriya Oz, the former chief prosecutor of Istanbul, who investigated cases of top-level corruption in 2013.

On the night of July 15, 2016 a group of soldiers and law enforcement officers, who referred to themselves as the Council for Peace in the Homeland, took Istanbul's Ataturk International Airport, two bridges over the Bosphorus and major Turkish broadcasters under control in an attempt to unseat President Erdogan and his government.

The coup was quickly put down by forces loyal to the government. More than 50,000 people were arrested and over 140,000 state employees were fired.

© CC0 / Pixabay
Thanks, But No Thanks: US Axes Gun Deal With Turkey Following Embassy Brawl
The authorities blamed Fethullah Gulen for orchestrating the coup and demanded his extradition from the United States.

Gulen condemned the mutineers and denied any role in the attempted takeover.

The move adds a new twist to the crisis in relations between the NATO allies, which have been going downhill since last year’s failed military coup in Turkey.

Thanks, But No Thanks: US Axes Gun Deal With Turkey Following Embassy Brawl