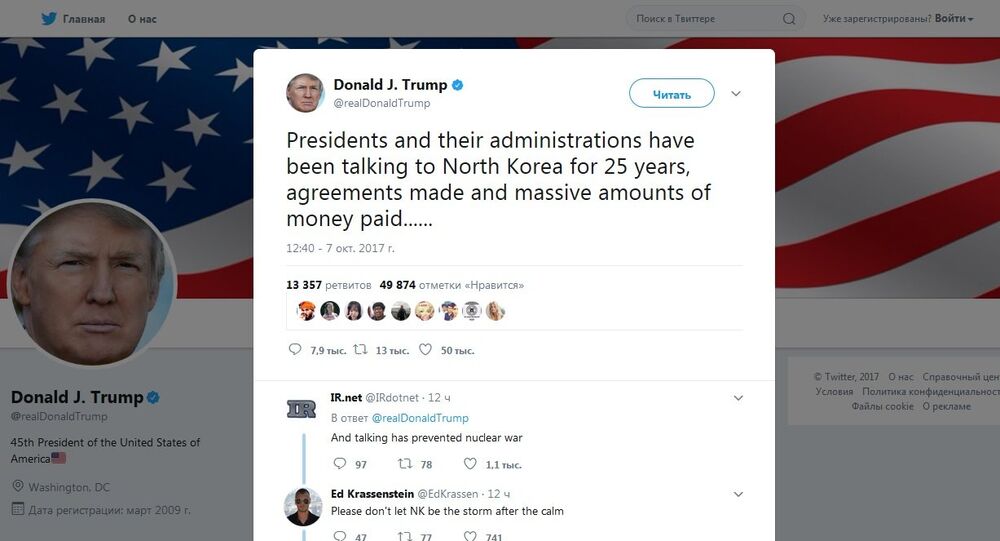 MOSCOW (Sputnik) — The lines of US President Donald Trump on Twitter about North Korea and solution of this problem seem to be reckless, former Ambassador of the United States to Russia Michael McFaul said Sunday.

These @POTUS red lines on North Korea seem reckless. I pray that they are instead part of some very clever coercive diplomacy strategy. https://t.co/XPe84eve66

The statements were made amid Russian lawmaker Anton Morozov's warning on Friday that Pyongyang was preparing to test-fire a ballistic missile that could hit the western coast of the United States. The lawmaker was among three Russian parliamentarians who traveled to Pyongyang on October 2-6 to discuss the peaceful settlement of the current crisis on the Korean peninsula.

Presidents and their administrations have been talking to North Korea for 25 years, agreements made and massive amounts of money paid……

The situation on the Korean Peninsula has become aggravated due to Pyongyang's missile launches and nuclear tests, conducted in violation of UN Security Council resolutions. In the most recent case on September 15, North Korea launched a ballistic missile, which flew over Japan before falling into the northern Pacific some 20 minutes after the launch.

In addition to worsening situation on the peninsula, Pyongyang has been trading threats with the United States. On September 26, US President Donald Trump said Washington was fully prepared for taking a "military option" against North Korea that would be "devastating." In response, North Korean leader Kim Jong Un threatened the United States with a harsh response.