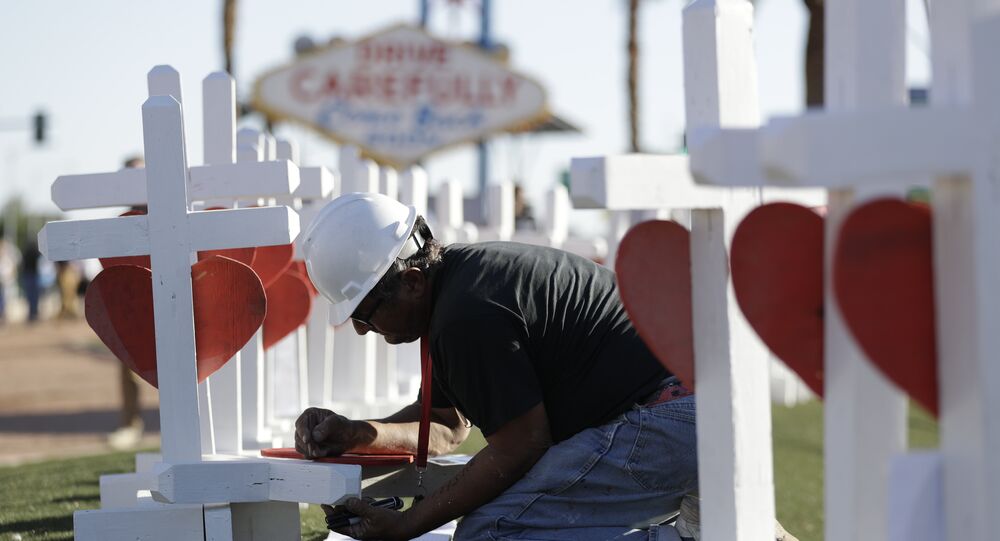 No stranger to building crosses, Greg Zanis towed a total of 58 hand-crafted white crosses to Las Vegas on Thursday to pay tribute to those who died in the mass shooting Sunday night.

Lining up the crosses in front of the iconic "Welcome to Fabulous Las Vegas" sign, Zanis, a carpenter from Aurora, Illinois, drove nearly 2,000 miles to arrange the installation. Adorned with red hearts for civilian victims and blue hearts for victims who were police officers, Zanis displayed a photo and wrote the victim's name on every cross. Stars of David were brought in for Jewish victims.

​"I feel that Las Vegas is having one of its darkest days in American history," Zanis told local station KTNV. "But I'm trying to shed light on that by bringing hope with the cross and showing ‘you weren't alone' when this happened."

The 66-year-old Illinoisan began creating the installation 20 years ago when his father-in-law was killed, AP reported.

"That just changed my life," Zanis said. "My first cross was somebody that I loved, and when I put these crosses here I always think of my personal loss here, too. Always."

​For the past 20 years, Zanis, who founded the nonprofit Crosses for Losses, has set up more than 20,000 crosses, including for the victims at Columbine and Sandy Hook. Prior to Las Vegas, Zanis did the same for the 49 victims that were killed in the Pulse nightclub shooting in Orlando, Florida, in June 2016.

The crosses, which took Zanis two days to make, will stay in place for the next 40 days and will later be given to the families of the victims.

On Sunday night, Stephen Paddock fired a hail of bullets from his 32nd floor room at the Mandalay Bay hotel into a crowd of concertgoers attending a country music festival, killing 58 people before killing himself. This incident has been dubbed the deadliest mass shooting in modern US history.