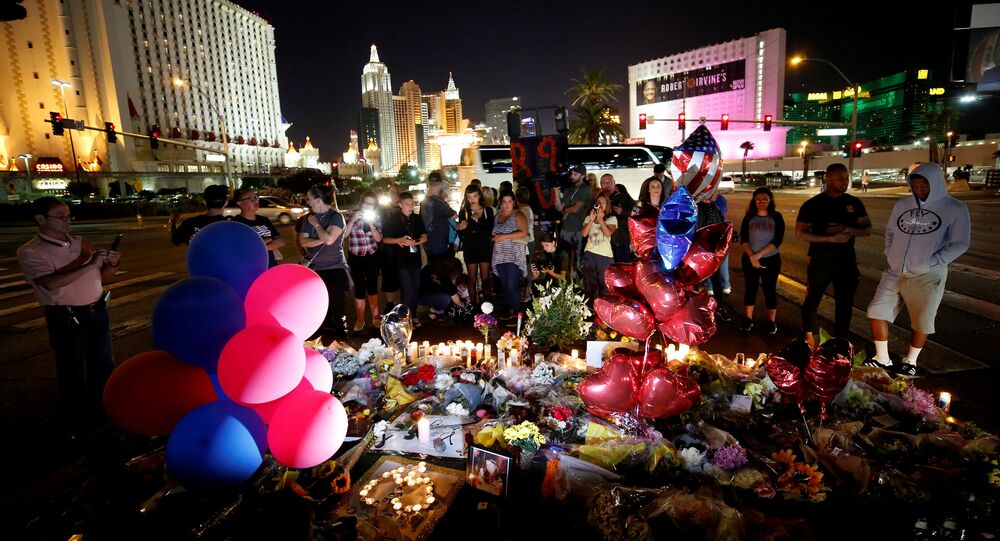 US country music singer and songwriter Eric Church presented his new song on Wednesday night to commemorate the victims of the Las Vegas massacre, just a few days after the shooting that claimed the lives of 58 people during a three-day country music event.

A song called "Why Not Me" in honor of the victims of one of the deadliest shootings in US history was performed at a show at the Grand Ole Opry, in Nashville, Tennessee, this week.

Before his performance, the author of the song, Eric Church, held an emotional speech about a married couple that came to Las Vegas to the Route 91 Harvest country music festival to see his performance.

© Sputnik
Las Vegas Shooting Massacre Spurs Conversation on Guns and Race
Sonny Helton was a fan of Church who had always dreamt of attending his concert and therefore brought his wife, Heather Melton, to Las Vegas. As result of the attack, Sonny was among the victims who died, and Heather was among those who survived.

The singer learned about their heartbreaking story after one of his fans sent him a video of Heather's interview with CNN.

"I didn't want to be here tonight. I didn't want to play guitar," Church said. "I didn't want to walk on this stage, but last night, let me try to get this out, last night somebody sent me a video of a lady named Heather Melton and she was talking to Anderson Cooper on CNN and she had on our Church Choir shirt."

Church then raised his hand and pointed at two seats in the hall. It turned out that the couple was also going to attend his concert in Nashville.

"And there's a, over here, section three, row F, if you're there in row F, there's some empty seats and that's their seats," he added. "I'm gonna tell you something, the reason I'm here, the reason I'm here tonight, is because of Heather Melton and her husband Sonny, who died, and every person that was there," he continued.

On October 1, a man armed with a gun opened fire near the Mandalay Bay Casino in Las Vegas, Nevada, during the three-day Route 91 Harvest country music festival. The shooting is the deadliest mass shooting in US history, killing 58 people (not counting the gunman) and injuring at least 489 others.