What Should We Know About Las Vegas Monday Shooting

On Monday a gunman opened fire on a crowd in Las Vegas leaving 50 people dead and more than 400 injured.

MOSCOW (Sputnik) — A gunman opened fire on a crowd in Las Vegas on Monday leaving 50 people dead and more than 400 injured in the deadliest ever mass shooting in the US history.

The gunman opened fire from the 32nd floor of the Mandalay Bay Resort and Casino on the Las Vegas Strip, targeting the crowd of concertgoers Route 91 Harvest country music festival.

© REUTERS / Las Vegas Sun/Steve Marcus
Daesh Claims Responsibility for Las Vegas Mass Shooting - Reports
The suspect, identified as Stephen Paddock, 64, a Nevada resident, was found dead by the SWAT team in the hotel room. There were numerous firearms inside. Las Vegas police said Monday that the perpetrator of the deadly mass shooting killed himself before police entered the hotel room where he was firing from.

The motive behind the shooting is unclear yet. The police are looking for a woman named Marilou Danley, for questioning in connection to the shooting investigation.

One off-duty police officer is among the dead, two on-duty officers were injured.

US Department of Homeland Security spokesperson David Lapan said that no other public venues in the United States have received credible threat.

The roads and hotels that were shut down in the immediate aftermath have been gradually reopening.

Victims not Identified Yet

The victims have not been identified yet, so it is unclear whether there were any foreign citizens among the deceased or the wounded. 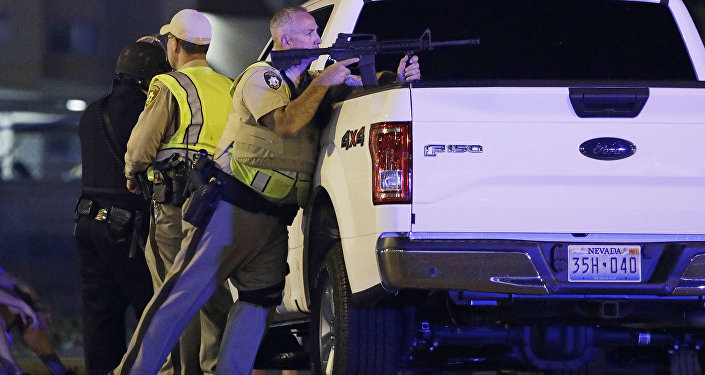 © AP Photo / John Locher
Las Vegas Police Say Suspect in Shooting Killed Himself Prior to Police Arriving
Olga Martin, Honorary Consul with the Czech Honorary Consulate in Las Vegas, told Sputnik that the General Consulate in Los Angeles has already been contacted but it is too early to say if any Czech citizens were among the victims of the shooting.

"We are contacting the local authorities [to find out] if any Czech citizens have been affected… We are very much concerned about this act of violence. It has not happened in Las Vegas before," Martin said.

The Embassy of Mexico in the United States told Sputnik that they did not know whether any Mexican nationals suffered in the shooting.

"As far as I understand, US authorities have not identified the victims yet," the embassy representative said.

Tilman Renz, Deputy Head of Information of the Swiss Federal Department of Foreign Affairs, said in a statement to Sputnik that the department was dismayed and sad to find out about the tragedy.

"The FDFA expresses its deepest sympathy to the families of the victims. The Federal Department of Foreign Affairs (FDFA) is in contact with the local authorities and in the process of clarifying whether any Swiss citizens are amongst the victims of the attack. We have not received any reports or queries in relation to the incident so far," Renz said.

Condolences Begin to Flow in

The condolences to the victims and expressions of solidarity from all over the world have begun to pour in.

"My warmest condolences and sympathies to the victims and families of the terrible Las Vegas shooting. God bless you!" US President Donald Trump said on Twitter.

"Horrified by the terrible shooting in #LasVegas; my thoughts are with the families and friends of the victims," Austrian Foreign Minister Sebastian Kurz said on Twitter.

Horrified by the terrible shooting in #LasVegas; my thoughts are with the families and friends of the victims.

​Steffen Seibert, the spokesman for the German government also expressed shock over the events.

"So many broken lives. Our sympathy + a lot of strength to the survivors," Seibert wrote on his Twitter.

The official Twitter account of the Dutch Foreign Ministry has quoted Minister Bert Koenders as offering his condolences.

"Words fail this morning. The friendship & support of Canadians is with the victims in Las Vegas & the people of the US," Canadian Prime Minister Justin Trudeau said.

UK Prime Minister Theresa May has also expressed her sympathy, as quoted on the government's Twitter.

Russian Prime Minister Dmitry Medvedev said he was shocked by the tragic events in Las Vegas and offered condolences on behalf of the Russians.