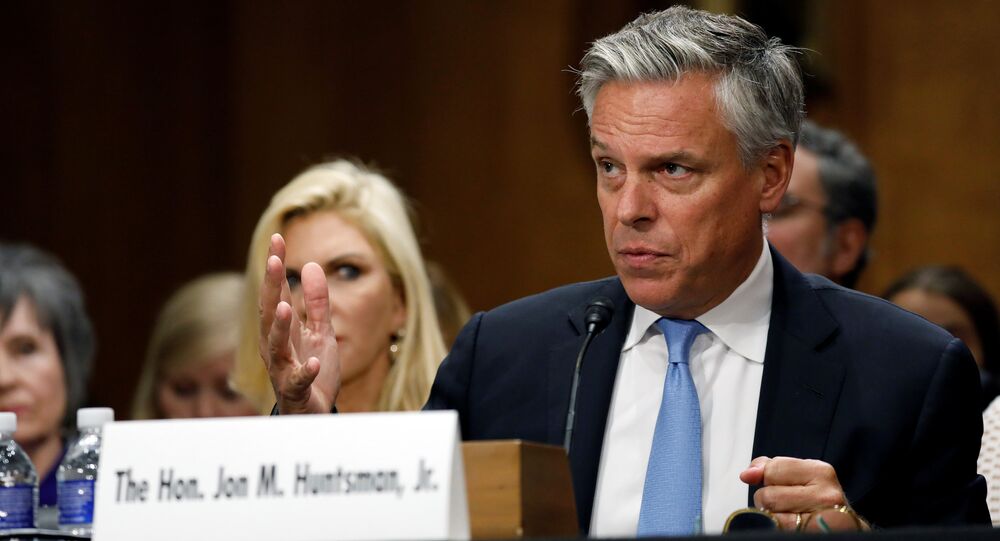 On the Hunt for New US Ambassador to Russia Jon Huntsman

New US ambassador to Russia may reportedly arrive in Moscow over the coming days. What to expect from Huntsman amid heightened tensions between the US and Russia?

MOSCOW (Sputnik) — The US embassy in Russia said Friday that new ambassador Jon Huntsman would arrive in Moscow soon.

"The U.S. Mission to Russia is delighted that Ambassador Huntsman was confirmed by the Senate and is looking forward to his arrival soon at post. We don't yet have confirmed details of the timing," spokeswoman Maria Olson told RIA Novosti.

Meanwhile, outgoing envoy to Russia John Tefft, who is completing his mission in Moscow, is expected to leave the country this week.

The US Senate has approved former Utah Governor Jon Huntsman as the new US ambassador to Russia in July.

US politician and diplomat Jon Huntsman was born on March 26, 1960 in Redwood City, California into the Mormon family of billionaire and philanthropist Jon Huntsman Sr., the owner of the chemical company Huntsman Corporation.

Huntsman, the eldest among his nine siblings, attended Highland High School in Salt Lake City, but dropped out at the age of 15 to play in a rock band called "Wizard." By that time, he had earned the rank of Eagle Scout, the highest rank of the Boy Scouts of America, the largest Scouting organization in the United States.

© AFP 2020 / PAUL J. RICHARDS
US Ambassador to Russia Huntsman Says Excited About New Role
Huntsman later entered the University of Utah and served as a Mormon missionary in Taiwan for two years.

In 1987, Huntsman graduated from the University of Pennsylvania where he obtained a Bachelor of Arts in international politics.

His political career started in 1983 in President Ronald Reagan's administration at a position of a White House staff assistant.

After serving in 1986 to 1989 in his father's companies as a manger and vice president, Huntsman worked as deputy US trade representative and US trade ambassador from 1989-1991.

The official later served as the country's ambassador to Singapore under President George H.W. Bush from 1992-1993 and China for President Barack Obama from 2009-2011, being the youngest US ambassador over the last century.

After his first mission as an ambassador Huntsman occupied leading positions in Huntsman Family Holdings Co.

Huntsman was a Republican nominee for the 2012 presidential election, but after finishing third in the New Hampshire primary, he announced the end of his campaign and endorsed Mitt Romney.

Currently, Huntsman is a member of the board of directors of Chevron, Caterpillar, Ford Motor Company, Hilton Worldwide Holdings.

Jon Huntsman is married and has seven children, including two foster daughters from China and India.

Huntsman said on Thursday that he was "honored and humbled" to serve the United States as the ambassador to Russia and was looking forward to taking up the role. Senate approval for Huntsman came on Thursday when outgoing US ambassador John Tefft left Moscow at the end of his term.