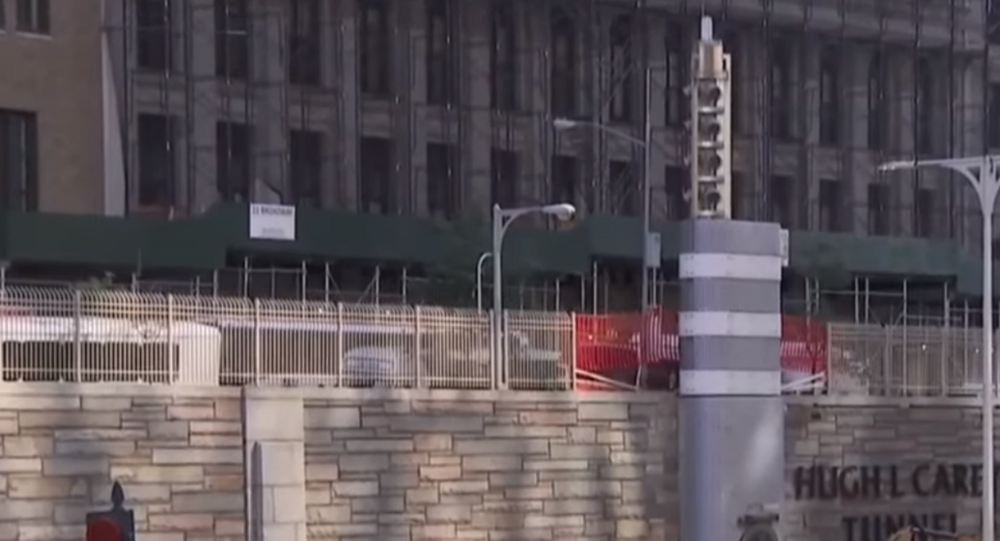 What are they, you ask? That's the million-dollar question that no one, not even city officials, really have a concrete answer to.

"I don't actually know what those are," Neal Zuckerman, a board member for the state's Metropolitan Transportation Authority, told Politico.

"A lot of board members felt they didn't have all the details they would have wanted, myself included," Polly Trottenberg, NYC's transportation commissioner, told local station CBS New York.

So what do officials know? For starters, the towers are part of Governor Andrew Cuomo's $100 million project to redesign the MTA's bridges and tunnels within the city. But that's not all: the local CBS station was able to squeeze a few more answers out of MTA Chairman Joe Lhota.

"The base of these new pieces that are going up include whatever fiber optics are necessary for those Homeland Security items."

From Lhota's vague response, the outlet surmised the project was part of an anti-terror initiative, speculation the chairman refused to confirm or deny.

With few details being tossed out to the public, one group has launched their own investigation to get to the bottom of the mystery.

"It's a bit mind boggling that the MTA is approving $100 million for what appears to us to be big, decorative pylons," John Kaehny, leader of watchdog group Reinvent Albany, told CBS2. "What we're asking for is transparency from the MTA."

Earlier in the month, Reinvent Albany filed an inquiry with the New York's Authorities Budget Office to see if the "MTA board was fully informed, before approving contracts" for the 59-year-old governor's project, the Daily Mail reported. But, not too surprisingly, the group didn't get their response.

© Sputnik / Alexey Filippov
New York City Takes Action on Climate Change Despite US Leaving Paris Accord
A more fulfilling answer was given to Politico by Shams Tarek, a spokesman for the MTA.

With old-school toll booths being removed from the tunnels, Tarek said the towers "host cameras, traffic monitoring and other equipment related to homeland security that would otherwise have been hosted by the former toll booth structures."

Once Cuomo's still-somewhat-mysterious project is completed there will be a total of 18 of these metal structures throughout the city.

When Cuomo first laid out his plan in October 2016, the structures were slated to "institute state-of-the-art automatic tolling" that would "improve overall travel experience for millions of residents," a press release said at the time.