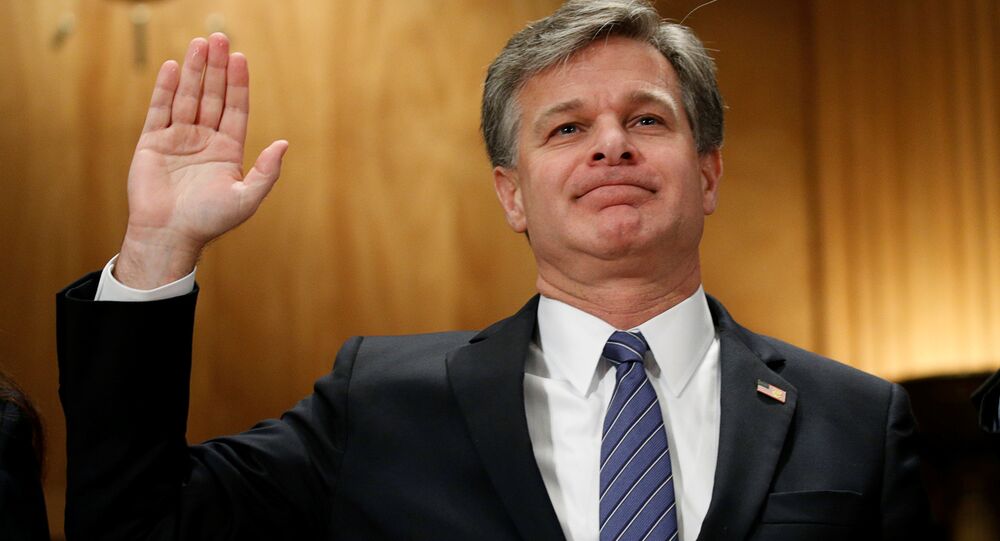 FBI Investigating as Many Cases of Domestic Extremism as Foreign Terrorism

The US Federal Bureau of Investigation (FBI) chief has struck back at Senatorial claims that law enforcement do not take domestic extremist groups as seriously as foreign terror threats.

FBI Director Christopher Wray has announced US authorities are currently engaged in the same number of open investigations into foreign terrorist groups, such as Daesh, as there are into domestic violent extremists affiliated with white supremacist, anti-government and other groups.

McCaskill argued that while fatalities were "almost equal," there has not been the same response from authorities in respect of the US' domestic terrorism threat.

"We've had multiple hearing on the threat of [Daesh] as it relates to Homeland Security. We've had zero hearings about the threat of domestic terrorists and the threat they pose in our country and our response to it," McCaskill said.

Wray disagreed, saying the FBI took both threats "very, very seriously," noting there had been 176 arrests for domestic extremism over the past year.

The FBI director added investigations into white supremacists were handled in a "similar" way to cases involving foreign terrorists — although acknowledged the FBI did have more tools available to battle foreign terrorists, such as FISA.

While domestic terrorism is not specifically an offense in the US, Wray suggested needing to invoke different laws did not compromise the effectiveness of terrorism busting efforts nationally.

"Sometimes the best charge may not be terrorism. There may be reasons why it's simple, easier, quicker, less resource intensive, and you can still get a long sentence. Even though you might not see them from your end as a domestic terrorism charge, they are very much domestic terrorism cases that are just being brought under other criminal offenses," he explained.

"We have brought neo-Nazi cases and will continue to bring them when we have the elements of the offense. I have not been hearing from my folks that they have felt hamstrung in that space. But, as I have said, we could always use more tools in that toolbox to be effective as possible."

Not All Terrorists Are Muslims

Wray's comments follow the release of a Government Accountability Office report that found there have been three times as many terror attacks committed by "far right violent extremists" than those affiliated with international terrorist groups since September 11, 2001. Moreover, it found that despite over US$50 million being spent by the Department of Homeland Security in 2016 alone on countering the growth of violent extremism in the US, there was no mechanism in place to determine whether efforts apart from surveillance and law enforcement had been effective.

From September 12 2001 until December 31 2016, "far right violent extremists," committed 62 terror attacks in the US, resulting in 106 fatalities. During the same period, radical Islamist terrorists committed 23 attacks in the US, killing 119 people — although 41 percent of those killings occurred in the 2016 Orlando club attack, which left 49 dead and 53 wounded.

The perpetrator of the Pulse attack — the deadliest mass shooting in US history — was a US-born security guard of Afghani origins, Omar Mateen. Some reports suggest he was often seen at the largely gay club, and he may not have been inspired by Islamic extremist ideology.

Also tagged as the work of radical Islamic terrorists were the 2002 "Beltway Sniper" shootings, in which 10 people were killed in Washington, Virginia and Maryland. However, while perpetrators John Allen Muhammad and Lee Boyd Malvo were both Muslims, a motive for the killings was never conclusively established, and investigators eliminated terrorist ties or political ideologies as even contributing factors to the spree.

Tellingly, the GAO noted far left-wing violent extremist groups did not result in any fatalities during the period studied. Such findings raise yet further questions about US law enforcement's documented prioritization of battling the Antifa movement rather than white supremacists and other extreme right-wing groups.