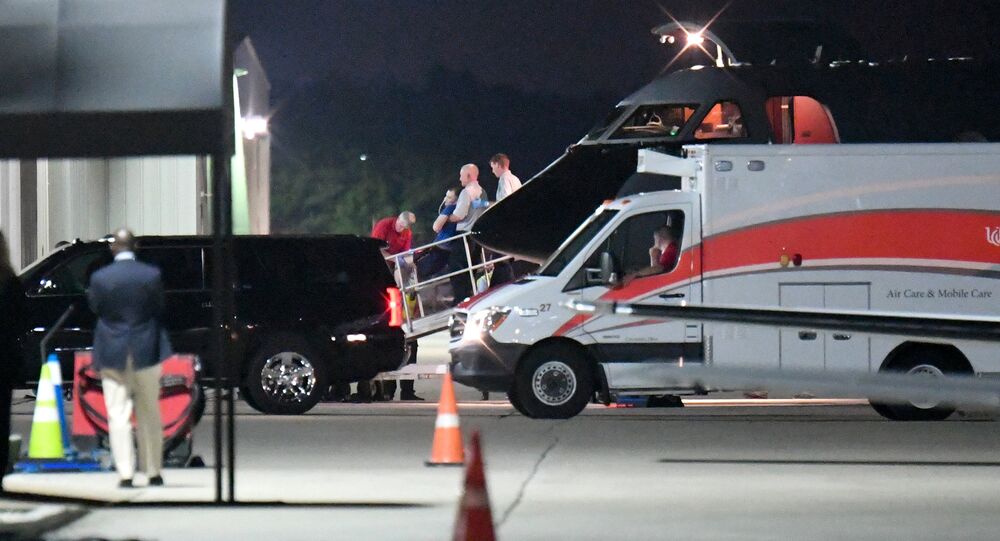 "Great interview on foxandfriends with the parents of Otto Warmbier: 1994-2017," Trump wrote. The young man's parents offered more information about their son and his mysterious coma in their Fox and Friends interview.

"Otto was tortured beyond belief by North Korea," Trump continued.

Great interview on @foxandfriends with the parents of Otto Warmbier: 1994 — 2017. Otto was tortured beyond belief by North Korea.

​In their interview, the Warmbier couple shed some details on what they saw when Otto has finally been delivered back home from North Korean custody.

"We thought he was in a coma. You couldn't call it a coma," Cindy Warmbier said.

"We walked over to the plane, the engines are still humming, they had just landed… when we got halfway up the steps we heard this howling, involuntary, inhuman sound. We weren't really certain what it was," Otto's father, Fred Warmbier said.

WATCH: Fred and Cindy Warmbier speak out for the first time since the death of their son Otto | @ainsleyearhardt pic.twitter.com/foKsrRPv6U

​"Otto had a shaved head, he had a feeding tube coming out of his nose, he was staring blankly into space, jerking violently… He was blind. He was deaf. As we looked at him and tried to comfort him it looked like someone had taken a pair of pliers and rearranged his bottom teeth." he added.

"North Korea is not a victim, they are terrorists," Fred Warmbier continued.

© AP Photo / Wong Maye-E
N Korea Cancels Wonsan Air Show as Warmbier's Death Scared Westerners - Travel Agency
An earlier report by the BBC from June 2017 quoted Dr Daniel Kanter, one of the physicians looking after Otto in Cincinnati, where he was taken upon his release, saying that Otto was in "a state of unresponsive wakefulness," having "spontaneous eye opening and blinking."

According to that report, Otto had indeed suffered brain damage, with respiratory arrest believed to be the cause, but it was unclear what could have caused such an arrest.

"There are no signs that Otto was beaten," BBC wrote at the time.

The official North Korean position is Otto contracted botulism, and fell into coma after he was given a sleeping pill. But a team of doctors assessing him in Cincinnati said they had found "no sign of botulism." Instead, they found that Warmbier had suffered a "severe neurological injury" of unknown cause, leading to an extensive loss of brain tissue, according to BBC.

According to Stephan Haggard, director of the Korea-Pacific Program at the University of California San Diego, Otto's demise could be the result of North Korean intelligence staff trying to cover up his health condition even from their own superiors, out of fear.

However, at some stage the North Koreans seem to have realized that it would be very unfortunate for a US citizen to die in their custody and sparked a diplomatic effort to bring the boy home, Haggard speculated, according to AFP.

Otto Warmbier was arrested in January 2016 as he was about to return home from his Christmas trip to North Korea. He was accused of stealing a propaganda poster from North Korean hotel and sentenced to 15 years of imprisonment. On June 13, 2017, he arrived in Cincinnati, Ohio, after North Korea released him on "humanitarian grounds." Warmbier never regained consciousness and passed away on June 19, six days after he returned home.