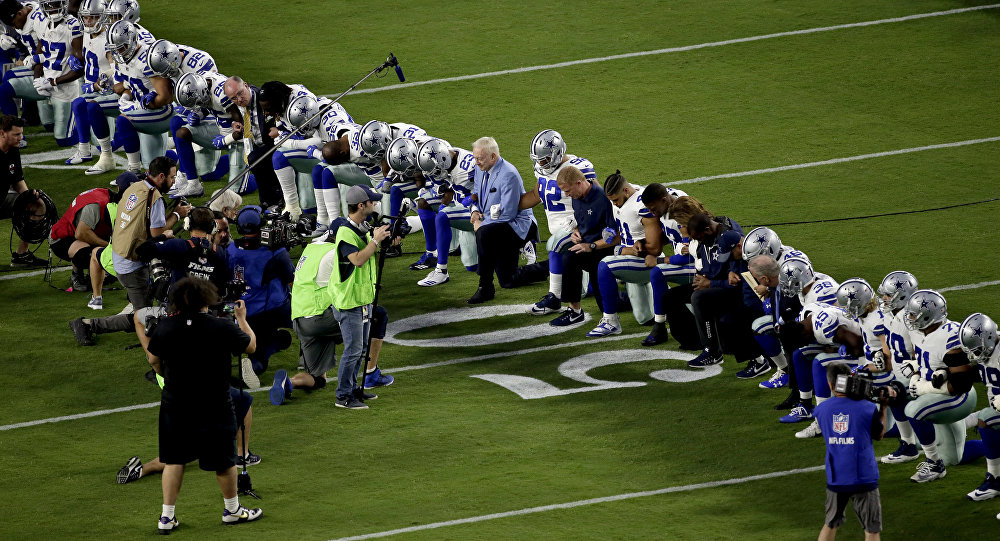 The NFL serves as a money-making driver for the MSM’s top US-based TV networks. But football owners and players have taken a knee to disrespect the American flag and fans, which will likely result in huge financial losses for the league. Tom McGregor takes a closer look.

By Tom McGregor, CCTV.com commentator and editor for CCTV.com, based in Beijing

The mainstream media (MSM) appears indestructible. They control a media narrative that endorses ‘globalist first’ and social justice warrior (SJW) principles. And despite the MSM’s dwindling audience numbers, Western media empires refuse to change and have continued a relentless assault on US President Donald Trump and his supporters. 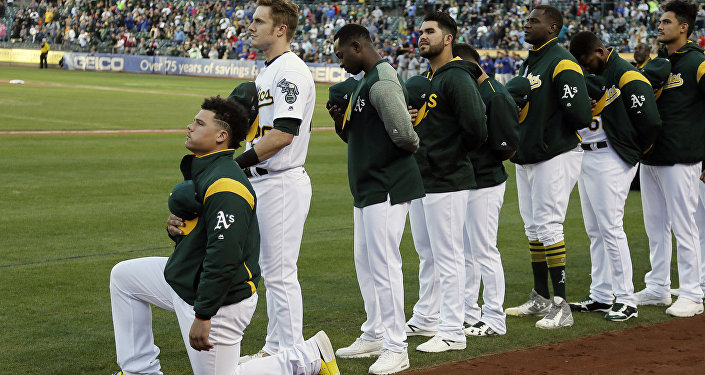 © AP Photo / Eric Risberg
Batter Up: First US Baseball Player Joins American Football Protests
But for those who oppose the MSM, they should not lose heart since Trump has recently uncovered the “Achilles heel” of major TV networks in the country.

The big TV networks — Fox, CBS, and NBC (along with ESPN-owned by ABC) — are bankrolled by ad revenues generated from broadcasting NFL (National Football League) games. The ‘cash cow’ allows the MSM to pursue their own political agendas, while media executives and reporters can enjoy the high-life with superstar salaries and benefits.

Apparently, Trump has taken notice. According to video footage, Trump spoke at a rally in Huntsville, Alabama on Friday. He blasted NFL players for taking a knee in front of the American flag during the national anthem, which is considered unpatriotic since players and spectators are expected to stand at that time.

“We are proud of our country, we respect our flag,” said Trump. “Wouldn’t you love to see one of these NFL owners, when somebody disrespects our flag, to say, ‘Get that son of a b**** off the field, he’s fired.”

Trump also highlighted the NFL’s slide in ratings, which are “down massively, massively.”

According to Forbes magazine, “Financial terms have not been released, the three networks (CBS, Fox, and NBC) are expected to pay roughly $3bn. a year, (compared to prior contract — collective annual payment, $1.9bn.) ESPN re-upped its deal with the NFL … at an annual rate of $1.9bn.”

© AP Photo / Marcio Jose Sanchez, File
Remembering Kaepernick: Is the NFL 'Vilifying' US Football Players Who 'Stand Up' to Racism?
The money figures seem astronomical, considering that major TV networks are struggling. They are required to make annual payments and can’t renegotiate terms until NFL contract expires in 2022.

Meanwhile, MSM reporters have encouraged football players to take a knee to support the Hillary Clinton-inspired resistance movement. Hence, TV networks have signed on to a suicide pact to keep ‘identity politics’ mainstream.

TV ratings for the NFL may continue to plunge, especially since most die-hard football fans are pro-Trump and many have joined the NFL Boycott. Some fans have posting videos of themselves burning their team’s jerseys and memorabilia.

The demise of the NFL would eventually lead to lower salary caps for teams, and perhaps the day may arise when players score touchdowns for minimum wage. But the hardest hit will be the MSM and we may witness bankruptcies coming soon.

When ad revenues decline for TV networks, they can no longer afford to pay for broadcasting rights of the NFL. But they must pay off their debts and if unable to do so, they must file Chapter 11 (bankruptcy declaration) to renegotiate payments to creditors.

Point of No Return Has Arrived

The TV networks, as well as NFL owners and players, can no longer change their fortunes under their control. Last week, more than 200 NFL players took a knee to protest the flag and fans are unlikely to forgive them.

To make matters worse, Pittsburgh Steelers Offensive Guard Alejandro Villanueva, an Army Ranger, and veteran of the Afghanistan war appeared to have taken a heroic stand last Sunday as the lone player on his team to stand up for the flag.

© REUTERS / Jeff Curry-USA TODAY Sports
'Hands Up, Don't Shoot': NFL Players Support Ferguson With Сontroversial Flashmob
But Villanueva had disavowed his patriotic actions a day later, writing on Twitter, “Every single time I see that picture of me standing by myself, I feel embarrassed.”

What a shame, but the snowflake and SJW crowds have assumed control of America’s stadiums and we can expect them to demand safe spaces for non-football fans to join players in taking a knee.

The TV networks may soon realize that politicizing the NFL does not boost profits and former fans will eventually find a new sport to cherish.