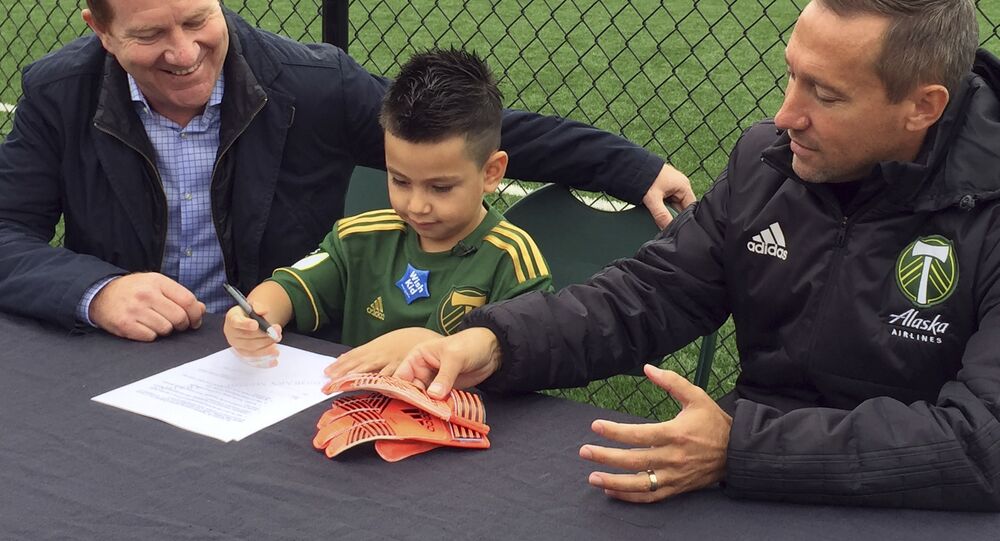 US major league soccer team Portland Timbers have signed five-year-old Derrick Tellez as their new goaltender. Tellez, who has had three surgeries for a malignant brain tumor, was signed to a one-game contract with the team, granting his wish from the Make-A-Wish charity foundation.

In the run-up to the Portland Timbers’ home game against Orlando City SC on Sunday, Derrick Tellez took part in his first training session with the team on Friday.

"We're very excited. It's a big day for the club," Timbers coach Caleb Porter said. "We've had our eye on Derrick for a long time. He's been on our radar for several years…. We think he's one of the brightest up-and-coming most talented young goalkeepers to come through our club in a long time, certainly."

"I think we might throw him into the fire and start him on Sunday. I told him I wanted 20 saves,” he joked.

© Photo : Youtube/Michelle Rothfork
World's Cutest Little Hockey Goalie Busts an All-Star Move
After taking part in the Timbers’ training session on Friday, Derrick Tellez will join in pregame warmups before parading with his new teammates on the field for the national anthem ahead of their Sunday’s match against Orlando City.

Make-A-Wish grants the wishes of children with life-threatening medical conditions to enrich the human experience with hope, strength and joy. With the help of generous donors and tens of thousands of volunteers, the foundation has granted the wishes of countless children since its inception in 1980.