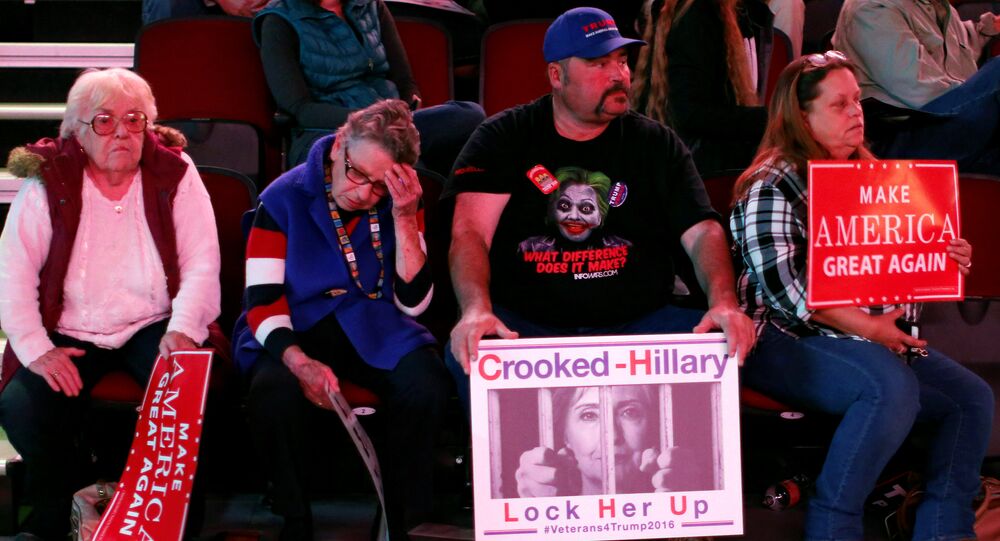 The Daily Beast has published a lengthy exclusive claiming that Russia used a Facebook page to organize rallies to support the 2016 presidential bid of Donald Trump - except their 1,600 word article cites no sources and is built around only the scantest amount of circumstantial evidence.

"Suspected Russian propagandists on Facebook tried to organize more than a dozen pro-Trump rallies in Florida during last year's election," the explosive article opens. If such allegations are true, then those pesky Russians were actively campaigning for Trump!

The Daily Beast goes on to explain that the Facebook page "Being Patriotic," which helped organized a series of "flash mobs" in 17 cities and towns throughout the electorally key state of Florida, was actually owned by Russia.

"Being Patriotic," which had 200,000 followers when it was deleted from Facebook in August 2017, was described by The Daily Beast as having "the strongest activist bent of any of the suspected Russian Facebook election pages."

A shocking allegation; surely one no self-respecting journalist would make without decisive evidence, right? But the Daily Beast's damning evidence of "Being Patriotic's" Russia ties is, in its entirety, that it was shut down around the same time the social media giant shut down some other sites alleged to be run by Russia.

"Being Patriotic" was shuttered by Facebook in August 2017, the same month pages run by the Internet Research Agency, which has been accused of influencing the US election by "amplifying divisive social and political messages across the ideological spectrum," were also purged. Facebook didn't comment on any connection between these events, but they did happen close together.

In their September 2017 report about the allegations of Russian actors using Facebook to aggrandize Trump or impugn his opponent Hillary Clinton, Facebook Chief Security Officer Alex Stamos wrote that ads from Russian IP addresses by and large "didn't specifically reference the US presidential election, voting, or a particular candidate." Furthermore, the vast majority of the ads were national in nature, not targeted at a specific region.

In other words, "Being Patriotic" does not fit the profile of a Russia-owned Facebook page by Facebook's own definition.

The only source in the Daily Beast article is Clint Watts, a former FBI agent who spoke to the Senate Intelligence Committee in March about alleged Russian interference in the US election. Watts told the Daily Beast that "if [the pro-Trump rallies] traces back to Russia, you can't deny that's foreign influence in an election."

The article's only named source is someone saying, "Well, if these allegations are true, they'd be serious." Are you compelled yet?

Over on Twitter, staff writer for The Atlantic Julia Ioffe wrote: "Great story, except it doesn't quite prove the link to Russia. How do you know it was [Russia]?"

"Sources," replied Spencer Ackerman, one of four writers of the article. "We had to be a bit opaque in places, as you can understand."

"Hmmm, why not say 'according to sources'?" asked Ioffe. "Just reads as a tenuous connection as written. (Don't mean to attack, just looking for clarity)."

Great story, except it doesn't quite prove the link to Russia. @attackerman @GideonResnick How do you know it was R? https://t.co/1kFXElTKye

Hmmm, why not say "according to sources"? Just reads as a tenuous connection as written. (Don't mean to attack, just looking for clarity)