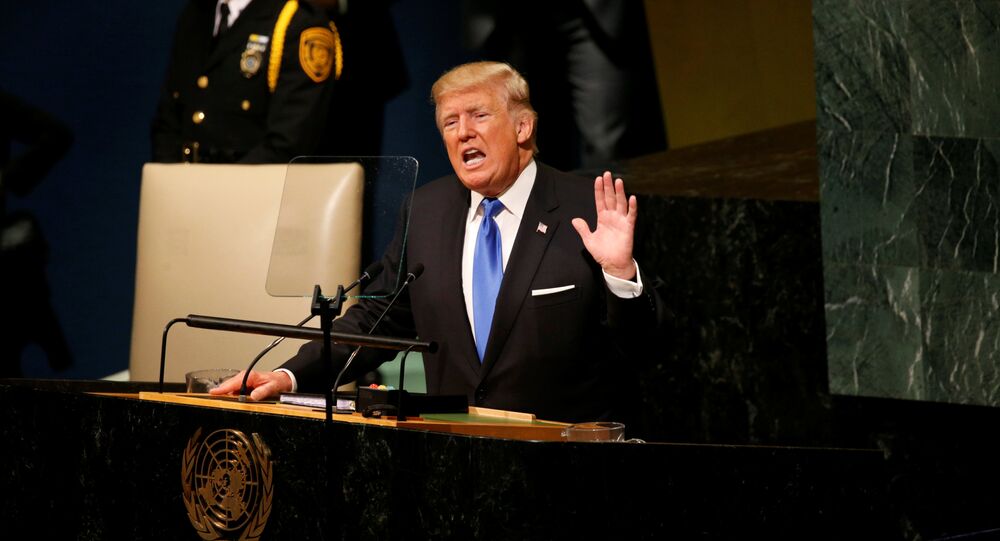 While delivering his speech at the UN General Assembly (UNGA) Donald Trump called upon the UN member states to crackdown on common threats, lambasting a "small group of rogue regimes" present in the organization.

On Tuesday US President Donald Trump delivered his first ever speech at the United Nations General Assembly (UNGA) calling for a "great reawakening of nations" and urging the UN member states to team up in oder to crack down on the "enemies of humanity."

'US Has Done Very Well'

Trump began his speech with the statement that the US "has done very well" since the US 2016 presidential election in November 8. He said that "the stock market is at all time high" while unemployment is "at the lowest level in sixteen years," due to his administration regulation policies.

While speaking about the successes, Trump highlighted that the US "will be spending 700 billion dollars on military and defense."

"Our military will soon be the strongest it has ever been," the US president emphasized.

© AP Photo / Ihsanullah Majroh
US Airstrikes in Afghanistan Boom Under Trump: New Victims, No Efficiency
Trump further noted that although the nations of the world are living "in a time of extraordinary opportunity" there are looming threats facing them, which he outlined as international terrorism and extremism; "rogue regimes presented in this body" [UN]; and international criminal networks.

Addressing the UN, Trump recollected that the organization was founded in the aftermath of two world wars "to shape a better future." He praised the US-led Marshall Plan, officially known as the European Recovery Program (ERP), which was an American initiative to aid Western Europe after WWII, and underscored that the "three pillars of peace" are "sovereignty, security and prosperity."

Stressing that the success of the UN depends on a well-built coalition of states, he noted that "we don't expect diverse countries to share the same cultures, traditions or even systems of government," but expect that they will fulfill two core government duties: to respect the interests of their own people and the rights of other sovereign nations.

Trump said that the US must defend its values and put its interests first, adding that likewise other nations should put their countries first, for their part.

Reiterating the idea that the nations of the world should work together to ensure a peaceful and prosperous future, Trump at the same time denounced "one-sided deals" the US stuck with other countries while getting "nothing in return."

He continued that the United States paid a price for its freedom and the freedom of many nations represented in the UN, from Europe to the Middle East and Asia.

Trump highlighted that although Washington bore the burden of this responsibility it had never pushed ahead with territorial expansion and didn't "impose [American] life[style] on others."

The US president also highlighted that the US is "guided by outcomes, not ideology" in resolving the world's burning issues.

Having said this, the US president shifted the focus to the "dangers" the world is facing today.

"We must reject threats to sovereignty from Ukraine to the South China Sea," he said, adding that nations have also to respect law, borders and culture.

"We must confront together those who threaten us with chaos, turmoil and terror," he said referring to a "small group of rogue regimes" which "violate every principle on which the US is based."

"If the righteous many do not confront the wicked few than evil will triumph," he claimed.

© REUTERS / Eduardo Munoz
Trump Threatens to 'Totally Destroy' North Korea if 'Rocket Man' Kim Doesn't Stop Nuclear Tests
The North Korean government was accused of the starvation of millions of North Koreans, imprisonment of dissidents and the death of an innocent American student.

Iran was next to come under Trump's fierce criticism. The US president called the Iranian government "a corrupt dictatorship behind the false guise of a democracy" which exports "violence, bloodshed and chaos."

Accusing Tehran of threatening its "peaceful Israeli and Arab neighbors" Trump claimed that it was Iran that "undermined peace throughout the entire Middle East" by supporting "the al-Assad dictatorship" in Syria and "fueling the Yemen civil war."

He also criticized the Iran nuclear deal concluded in 2015 by the P5+1 group, branding it as the "worst embarrassment to the US," and accused Tehran of proceeding with its "dangerous missile program" which could lead to the "eventual construction" of nuclear weapons.

While speaking of Iran, Trump dropped the hint that "oppressive regimes cannot endure forever" and that "the day will come and the people will face a choice" whether they want to "return to their proud roots as a center of civilization, culture and wealth."

While focusing on Middle Eastern matters, the US president didn't miss the chance to repeat his accusations against the Syrian government, which he branded as "the criminal regime of Bashar al-Assad," of using chemical weapons against its people in a reference to the disputed chemical incident in Idlib province in early April 2017. The US has not presented any evidence to confirm these claims yet.

© REUTERS
Trump's New Plan: CIA May Be Mulling Over 'Regime Change Strategy' Against Iran
Regardless of the fact that he claimed that the US is usually "guided by outcomes, not ideology," Trump jumped at the opportunity to lambast "corrupt and destabilizing" "socialist dictatorships" of Cuba and Venezuela.

According to Trump, the socialist ideology is flawed: Wherever it was implemented it always led to poverty, "anguish, devastation and anger."

While making a remark that the US is not intending to lift sanctions on Cuba, in contrast to the promises of the previous administration, he paid more attention to the situation in Venezuela, saying that the US "can't stand by and watch" while the "corrupt regime" of Nicolas Maduro remains in power.

He claimed that the US calls for the "full restoration of democracy and freedom in Venezuela," but didn't specifying how he is going to accomplish such a task.

The US president concluded his speech calling for a "reawakening of nations," for the "revival of their spirits, pride, people and patriotism" and a "rebirth of devotion" to "defeat the enemies of humanity."

"We will fight together, sacrifice together, and stand together for peace, for freedom, for justice, for family, for humanity and for the Almighty God who made us all," Trump said.