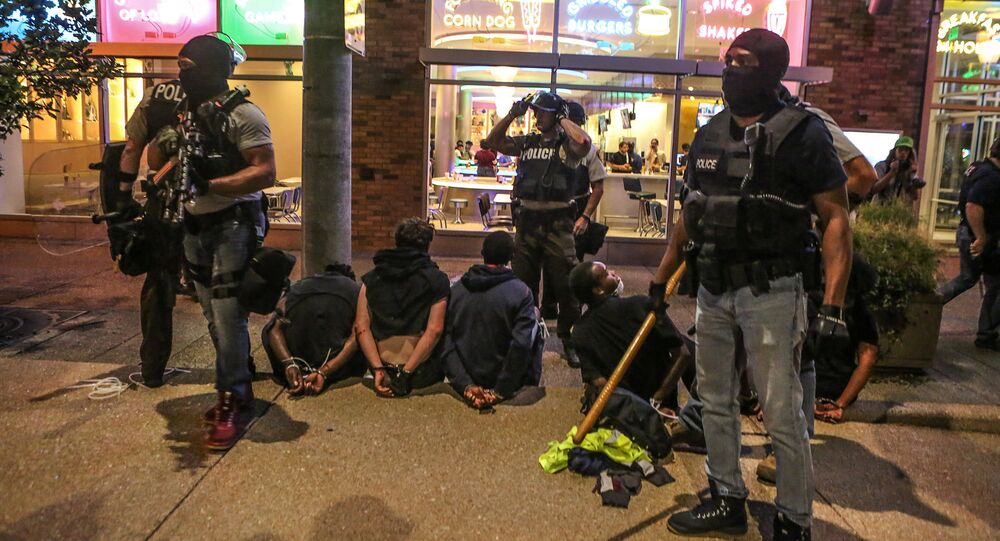 Riot police in St. Louis, Missouri have arrested over 80 violent protesters amid the third straight day of protests in the Midwestern US city over the acquittal of a white ex-police officer in a 2011 shooting death of a black suspect. Sputnik presents a collection of the most striking footage and photos from the unrest, and the police crackdown.

Violence escalated Saturday as demonstrations turned into riots, with agitators engaging in vandalism, and clashing with police. Thirty protesters were arrested Saturday night. Demonstrations continued Sunday. Protests again started off peacefully, but turned violent as night fell, when an estimated 100 protesters reported to have confronted police as they marched through the downtown area.

Police said they were forced to deploy more officers amid reports of "significant property damage" and "agitators breaking multiple windows." Photos and videos from the scene showed damaged storefront displays from several local businesses, and broken ceramic flowerpots which lined the streets. Rioters threw rocks and sprayed unknown chemicals at police, resulting in "minor to moderate" injuries among police officers. The violent protesters defended their behavior, saying the police were the ones who provoked violence by deploying riot gear and armored vehicles to the area.

Police giving order to disperse immediately at Tucker and Pine. This is no longer a peaceful protest. #stlverdict

A lot of damage in just a short amount of time in downtown #StLouis.#STLVerdict #stockleyprotests
(The official protest ended hours ago) pic.twitter.com/mmUYKi7AGw

Criminals have caused serious property damage in the downtown area. This destruction will not be tolerated. #stlverdict pic.twitter.com/qNl2VwTVmp

The St. Louis police Department published evidence of weapons, a mask, protective gear and an Anonymous flag confiscated from one of the rioters.

RIGHT NOW in Downtown: they have warned us tear gas could be deployed. People are driving around walking their dogs. pic.twitter.com/37F4NrCfyl

The rioters were warned to disperse, and said they would use tear gas and pepper spray and making arrests.

During the peaceful protest during the daytime on Sunday, demonstrators gathered in front of the police headquarters, chanting "stop killing us," "No justice, no peace," and then continued marching through streets, holding up 'Black Lives Matter' signs and chanting the popular protest slogan "this is what democracy looks like."

Excessive use of force by mostly white police officers against black suspects is a problem which has received widespread attention in the US since the 2014 shooting death of Michael Brown in Ferguson, Missouri, a northern suburb of St. Louis by police officer Darren Wilson during a convenience store robbery in which Brown was involved. Brown's death and the court's refusal to charge Wilson led to widespread protests, which would spread to other US cities after similar incidents. Many of these peaceful protests have been plagued by violence.