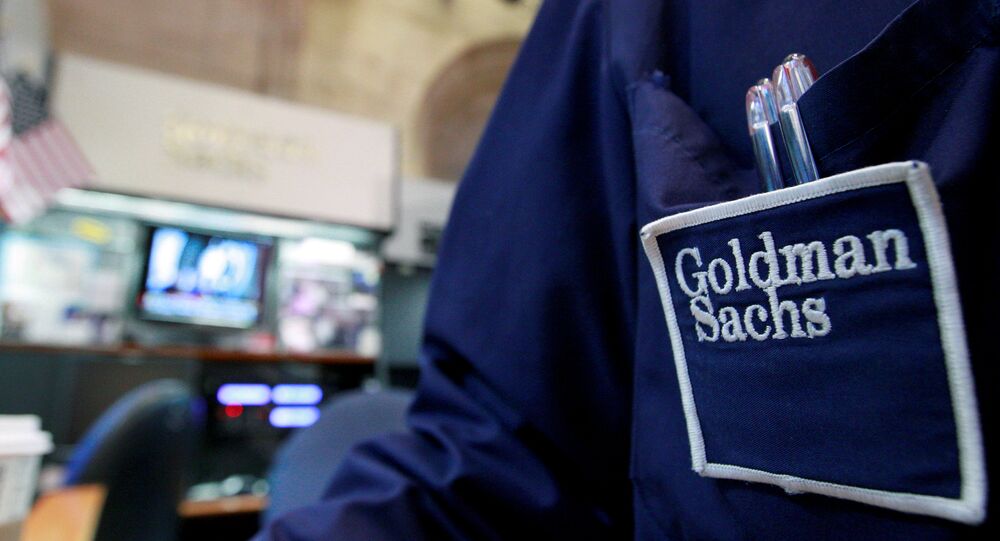 US financial markets might be heading for a collapse as a result of the gradual removal of accommodative monetary policies and the end of the speculative rally, which has caused a rift between stock valuations and growth in the real economy.

Kristian Rouz – One of the world's largest investment banks, Goldman Sachs, says the stunning rally in US stocks might come to a dramatic end, as the artificial bull market is wearing down amid the ongoing removal of central bank stimulus. Goldman's bear-market anticipation index has reached its pre-dot-com crash and pre-Great Recession levels, meaning a reversal in stock market dynamics is worth anticipating in the near-term.

The consequences of a stock-market crash in the real economy are hard to predict under current circumstances. On the one hand, a sudden decline in stock value typically hurts non-financial enterprises as they lose capitalisation and operational flexibility amid a liquidity squeeze.

© AP Photo / Richard Drew
US Lawmakers Urge Trump to Condemn Goldman Sachs Venezuelan Bond Purchase
On the other hand, given that the stock market is currently significantly overpriced, and stock valuations have far outperformed real economy expansion and are purely speculative, a financial market crash might have only limited negative consequences for the real economy.

In a separate report, Citibank says the chances on a market correction in the coming three months are currently at 45 percent.

However, Goldman's Bear Market Index is at 67 percent currently, and the bankers say tepid inflation and structural issues are bringing the probability of a recession closer. However, if the central bank abstains from further interest-rate-hikes, a cyclical recession is likely to define the next year's economic developments.

Overstretched stock valuations are the Goldman's chief concern. The very low interest rates had driven an unprecedented stock market rally in the post-Great Recession period, and since Donald Trump was elected in November, the rally intensified due to his business-friendly attitudes and the still-loose monetary environment (despite several quarter-percent increases since December 2015).

Goldman says the current stock market expansion is already very long-lived, and, in accordance with what goes up, comes down' logic, the currently-overvalued stocks will inevitably see a period of correction. While stock margins are also high, chances are they have peaked and are entering a period of decline.

However, the main focus remains on monetary and fiscal policies, and the Federal Reserve and White House have repeatedly reaffirmed their commitment to policy normalisation. The quantitative-easing-fuelled stock rally thus must end.

The scale of the looming stock market crash is another question. While a cyclical contraction would see capital losses of up to 30 percent, a structural recession is a likelier probability, unless the Trump administration moves fast on the fiscal policy front — and the Fed hikes rates in December, preferably, by 0.50 percent.

According to Goldman, a structural slump might erase up to 50 percent of stock market capitalization, and it would take up to a decade to recover the losses.

The coming six months will thus show the likely developments in the US stock exchanges and the economy for years ahead, depending on the scale and nature of the upcoming market correction, Fed decision-making, and the Trump administration's fiscal and regulatory policy decisions.