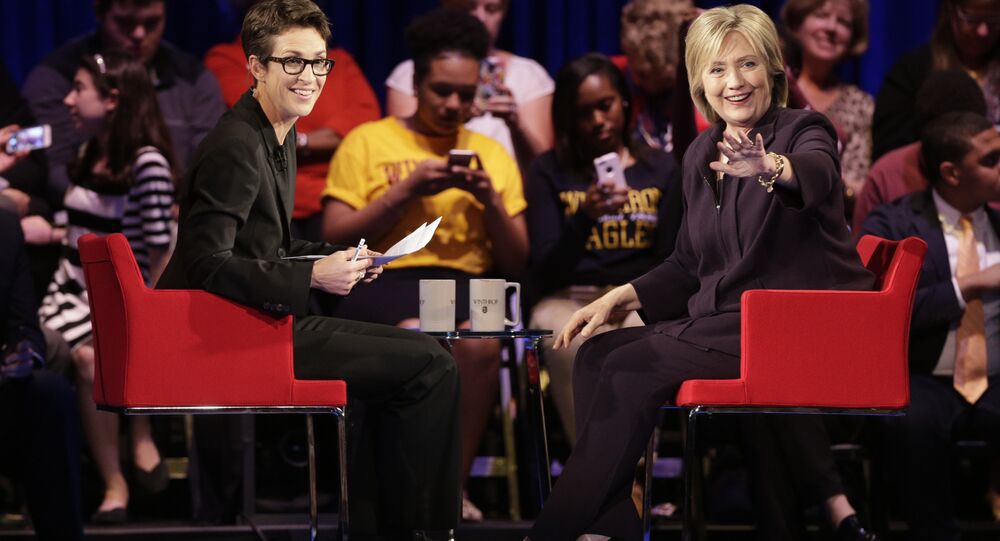 MSNBC host Rachel Maddow has accused Jared Kushner, senior adviser to US President Donald Trump, of directing targeted voter manipulation during the 2016 election. She made the allegations based on Facebook data about Russia-based fake news - except Facebook has repeatedly denied that Russia-based ads had any impact on voting during the campaign.

During her eponymous show, Maddow read a report from July by McClatchy News that claimed that "investigators at the House and Senate Intelligence committees and the Justice Department are examining whether the Trump campaign's digital operation – overseen by Jared Kushner – helped guide Russia's sophisticated voter targeting and fake news attacks on Hillary Clinton in 2016."

McClatchy reported as though the allegations were entirely true and the Congressional investigation was simply to establish guilt. "There appears to have been significant cooperation between Russia's online propaganda machine and individuals in the United States who were knowledgeable about where to target the disinformation," read the McClatchy report that Maddow repeated aloud on her program.

"So this would appear to be a key part of what Russia did to try to skew the election toward Donald Trump," Maddow explained, before making a comment of her own: "This behavior by the Russians using American social media, specifically using Facebook, it's a key component of if they had any American help in what they did."

"Now that Facebook is no longer denying it," as Maddow put it, it's time to expand the hunt for Russian spies to include purported American assistants, like Kushner.

Damning allegations indeed. Except Facebook have themselves repeatedly debunked the notion that Russian actors influenced the campaign in any marked way. In a Wednesday press release, Facebook's Chief Security Officer Alex Stamos wrote that between mid-2015 and mid-2017, "the vast majority of ads run by [fake Russian] accounts didn't specifically reference the US presidential election, voting or a particular candidate."

Furthermore, "sophisticated voter targeting" would presumably bombard voters in key swing states or precincts with fake news ads, but 75 percent of the roughly 3,000 questionable Russian ads Facebook found were national in scope. Of the remaining 25 percent that were geographically targeted, some 750 ads, most were found to have run in 2015, before there were even candidates for the 2016 election.

To put this in perspective, between 2015 and 2017, more than $30 billion was spent on Facebook advertisements in the US alone, according to online statistics compiler Statista. Facebook estimates that between $100,000 and $150,000 was spent on ads from what it found to be inauthentic Russian accounts or pages in that same time frame. That's a whopping.00005 percent, or half of one percent of one percent of all Facebook advertising spending in the US.

Hillary Clinton and her supporters managed to lose the US presidential election despite pumping $1.2 billion into their effort. If Russia managed to sway it by throwing $150,000 at Facebook, as Maddow and others in the press continue to insist, well, running for president is going to get a whole lot cheaper.

Contrary to what Maddow says, the new release is consistent with Facebook's previous comments on the matter. "The idea that fake news, of which it's a very small amount of the content, influenced the election in any way is a pretty crazy idea," Facebook CEO Mark Zuckerberg said in the immediate aftermath of the election.

An anonymous Facebook spokesman told CNN in July 2017 "that we have seen no evidence that Russian actors bought ads on Facebook in connection with the election." The recently issued report from Stamos corroborates that.

Facebook did admit in April that "malicious actors" created fake accounts on their website to spread misinformation during the election. But this is a far cry from an admission of foreign interference — and of the 201 websites subsequently banned from Facebook in the months following the election for spreading fake news, not a single one originates from a Russian IP.

Eichenwald's employer, of course, was forced to settle in court this year with young Sputnik editor Bill Moran after Eichenwald attempted to first bribe and then smear Moran when he revealed Eichenwald's falsehoods.

Kremlin: Moscow Has Nothing to Do With Facebook Ads During 2016 US Elex