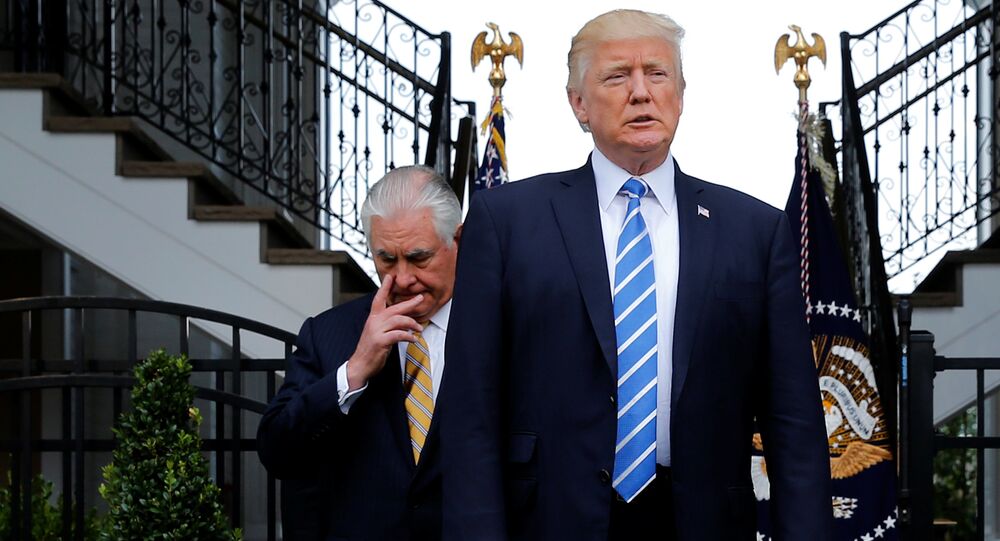 Commenting on US media reports about President Donald Trump's dissatisfaction with Rex Tillerson's work, an American expert told Sputnik that the Secretary of State's possible resignation may cause a destabilizing effect on other countries.

Earlier this week, the Washington Post reported that Trump has been increasingly unhappy with Tillerson and was having doubts about the loyalty of his key economic adviser Gary Cohn.

The report said the US President did not like how Tillerson had confronted him on the policy on Afghanistan, the Cuba issue and the Qatar crisis.

Doug Wead, an American political analyst and New York Times bestselling author, said that the situation is "very interesting" and that the US President is certainly not a "very subtle" person because "he communicates with his cabinet officers in public as well as in private."

"And if he doesn't get the result he wants, he tends to go public," Wead said, referring to Trump's frustration about Tillerson.

He also said that he doesn't think that "the media is conspiratorial in its efforts to go after Donald Trump but the internet is having a dynamic influence."

"The American public pretty much accepts the fact that journalists are biased so Trump is not going to be treated fairly by the American media," Wead said.

He added that he "doesn't know" whether Trump will fire Tillerson at the end of the day, given the US President's "unpredictable" behavior.

At the same time, Wead warned of the far-reaching implications of Tillerson's possible resignation, both domestically and internationally.

"My feeling is that it would send a signal of instability and uncertainty to other nations which grew accustomed to Tillerson. They like continuity and they don't like abrupt changes," he said, also referring to a possible uproar in the US media over Tillerson's departure.

All this adds to the impression that "right now we [the US is] are going through a rough time," Wead concluded.

Reports: Trump unhappy with Tillerson and Cohn, has no plans to oust either https://t.co/8OlYgj5mtO pic.twitter.com/RXJT05hIXp

Meanwhile, a Department of State spokesperson told Sputnik that US media reports suggesting President Donald Trump has been increasingly dissatisfied with Secretary of State Rex Tillerson are completely incorrect.

"Secretary Tillerson remains a trusted and highly valued member of the President's cabinet and national security team. Rumors to the contrary are absolutely false," the spokesperson said.

In early August, Tillerson said in a briefing that he and Trump maintain a good relationship despite differences of views on issues like the Iran nuclear agreement. Earlier, Tillerson said that he had no intentions to resign from his post.