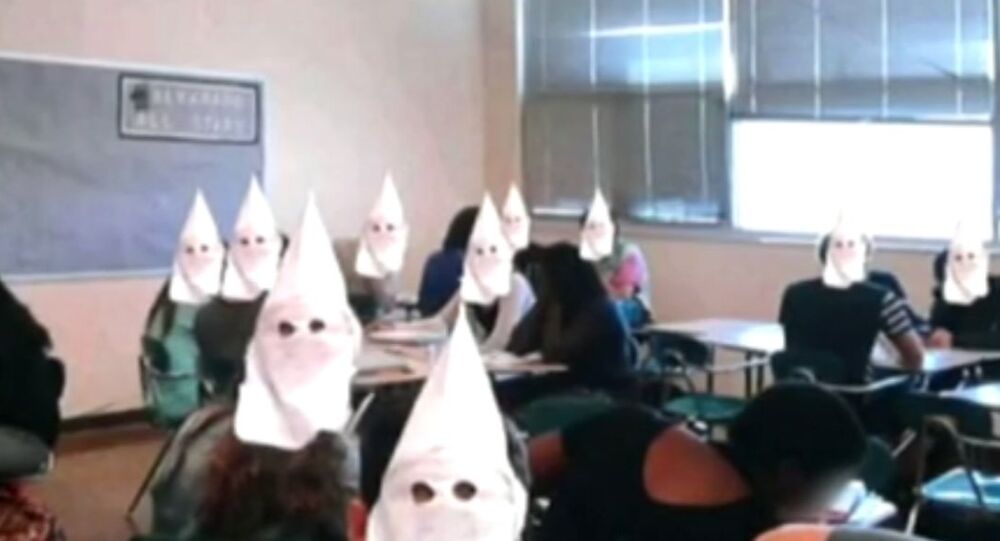 Two Albuquerque high schools students have been suspended from school after posting a photo altered with racist imagery on a school social media account. The images was described as “repugnant and hateful” by the school principal.

The doctored photo, posted Tuesday afternoon to Volcano Vista High School’s Snapchat group, shows two African-American students in a classroom surrounded by other students with Ku Klux Klan hoods digitally superimposed on their faces. School administrators were notified of the photo by other students.

© Flickr / Martin
Hate in the USA: Is The Ku Klux Klan Seeing a Resurgence in America?

The mother of one of the pictured students pictured told KOB 4, "It was awful … It was frightening. I just really got sick to my stomach. I was afraid for my daughters and for the other children there that are at risk for these types of threats."

Volcano Vista High School Principal Vickie Bannerman sent a letter to parents explaining the incident. "The students who doctored the picture and posted it to social media said it was supposed to be a joke," she wrote. "Of course, it was in no way funny. In fact, I found it repugnant and hateful. Please know that the students involved have been appropriately and expeditiously disciplined."

She asserted that the school expects "all students to be treated with dignity and respect," and that it won’t tolerate discrimination of any kind.

The two students responsible were suspended for 10 days and one of them was kicked off the school football team following an immediate investigation by Albuquerque Public Schools.

Lamont Webb, father of one of the African-American students, said, "You don't expect your kids going to school and having to deal with racism and discrimination in 2017 … It's kind of appalling."

Webb’s daughter and her two sisters have not returned to the school since the incident. He noted that he and his wife have been complaining about racist bullying at the school for three years, with no response from school administration.

"We've been coming in with complaints of my daughter saying someone called her the N-word," Webb said. "Someone called her a porch monkey and different things like that on a regular basis."

Albuquerque Public Schools Superintendent Raquel Reedy said the matter has been taken up by police, who will decide whether hate crime charges should be filed. She noted that the Webb’s complaints had been made before Bannerman became principal at the high school, and said she is "adamant that the school is going to be safe for every single student that attends."

"I would encourage any parent who has any concerns to contact Ms. Bannerman because she will look into it and they would be heard," Reedy said.

UN Chief Calls for ‘Standing Up’ Against Racism, Xenophobia