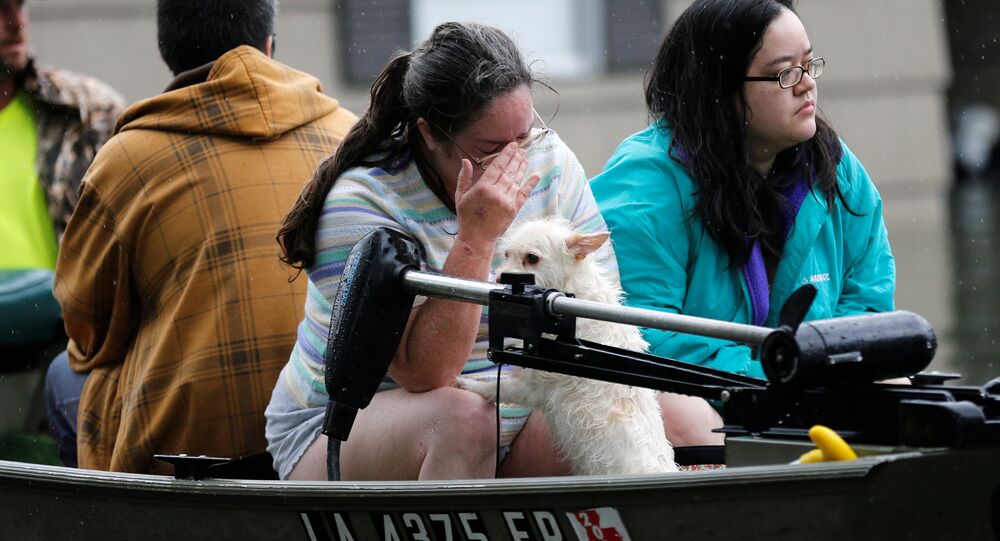 From Texas to Bangladesh: Natural Disaster Discrimination by Race and Class

The recent floodings in Houston, Texas, as well as Bangladesh and Nepal, have led to thousands of deaths. However, these disasters have also revealed how the heaviest cost is paid by the most vulnerable communities.

At least 20 people have died as a result of Hurricane Harvey in Texas, whilst over 1200 deaths have been reported in Southern Asia due to flooding.

#Bangladesh made history yesterday but we’re not talking about #cricket #BANvAUS. 1/3 of the country is under water due to severe flooding. pic.twitter.com/wjLDB0WS2v

​One of the most startling and sometimes overlooked aspects of disasters is the impact that it has on poor or marginalized communities, who tend to live in segregated areas.

Sputnik spoke to Professor David Alexander from the Institute for Risk & Disaster Reduction at University College London, who discussed the impact that floodings and other natural catastrophes can have on communities.

"Poverty is correlated with vulnerability to disaster, why is it that poor people have fewer resources? It's because they have less access to information, and may have less education to interpret it. They are marginalized, politically and socially and that leaves them vulnerable," Professor Alexander tells Sputnik.

​"On the other hand there isn't a perfect correlation between poverty and vulnerability and even between marginalization and vulnerability — this is a universal problem. There are communities in the world that have been poor and marginalized and they have organized successfully after a disaster," he adds.

© REUTERS
A flood victim washes herself at the flood affected area in Saptari District, Nepal August 14, 2017

However, Professor Alexander points out that the poorer and marginalized communities still have to consider the power struggle that may exist after a disaster.

Gaining access to resources, all comes down to the priorities of decision makers, and very often, people are poor because they are the lowest in the pecking order as far as allocation of resources goes.

Hurricane Harvey has crushed parts of the Houston region with 24 inches of rain. The devastating monsoon in South Asia has affected 41 million people.

In addition, the two explosions that took place at a chemical plant in Crosby, Texas, which lost power due to the flooding caused by tropical storm Harvey, made the impact of the disaster even more clear.

Could this have been avoided, and have communities been put at unnecessary risk?

Professor Alexander believes better planning could have been achieved.

"There has been a lack of provision and planning in Houston. Houston Council members were lamenting that the infrastructure was not good enough. That includes infrastructure for draining water in the event of a flood, and large rainfall.

"There is a great deal that could be done at all levels, from national to the individual at home," Professor Alexander tells Sputnik.

"There are people refusing to evacuate and they have very little understanding of the consequences of that, when sanitation of water supply breaks down, and they haven't got any alternatives, and water levels continue to rise and stay risen for quite some time.

"At present, the attention is on the chemical plant where there are explosions, and it makes you wonder, could they have not taken this into account in their emergency planning? Are they not obliged to plan better than they had? Their emergency generator has been flooded, they have lost power from outside sources, all of which is very predictable, so it's not looking good," Professor Alexander added.

Previous disasters such as Hurricane Katrina and Sandy revealed the impact natural disasters have had on the poor.

© AP Photo
The damage from hurricane Katrina near New Orleans is seen from Air Force One. In 2005 hurricane Katrina, the largest and third strongest hurricane ever recorded to make landfall in the US, left 1,300 people dead.

Disaster historian Jacob Remes said that much is said about how disasters don't discriminate by race or class, but in fact that is a lie.

6. We will hear claims about how disasters don't discriminate by race or class. This is a lie. Because disasters are social, they do.

​There is no doubt however, that the floodings in the US and South Asia have impacted people at all levels of society.

Professor Alexander explains that key factor is ensuring the clean-up operation is void of any corruption, and that the most vulnerable people in these communities are catered for in the ongoing process of reconstruction.

victoria, texas.
my heart aches for my hometown. #HurricanHarvey2017 pic.twitter.com/35PMNuT6ws

​"Disaster is a golden opportunity to reduce vulnerability, through decent planning and the right sort of action. When we look at employment, housing and the resources, it's done in a robust and resilient way.

"The reconstruction needs to be sensitive to people's needs and culturally compatible. If its not culturally compatible it will be rejected, you can't do a 'one size fits all.' It requires participation, and people must feel that they are masters of their own destiny or they will be marginalized, and the social problems continue,"  Professor Alexander concludes.