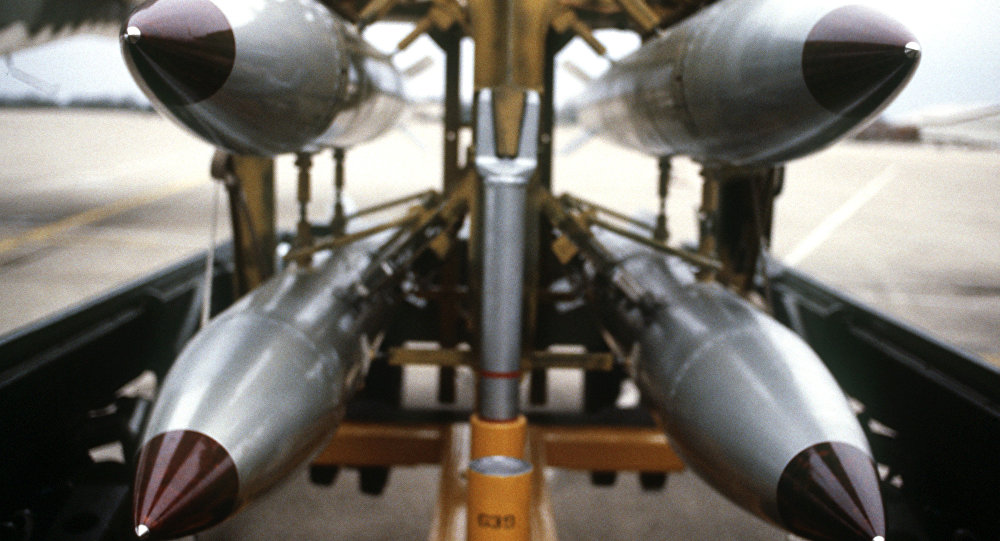 'Americans Preparing for War': Why US Testing B61-12 Nuclear Bomb

The recent flight tests of an upgraded nuclear bomb in the Nevada desert mean that the United States is preparing for war, military analyst Oleg Glazunov told Sputnik.

Despite posing no direct threat to Russia, the recent test of the bomb  “means that the Americans are preparing for war”, Glazunov said.

He also mentioned the role played by the powerful military lobby, which will keep pushing for ever newer weapons in the US arsenal.

“The upgraded version of the B61 bomb will be used to replace the almost 200 unguided B61s the US now has in Europe. The Americans will say that this is done against Iran, but there is also Russia out there, right?” Glazunov noted.

He added that the recent tests of the B61 nuclear bomb could also be meant to intimidate North Korea.

Glazunov said that he doesn’t think that the Americans are really going to use exactly this type of nuclear bomb against North Korea.

© CC0
US Tests Delivery of B61-12 Nuclear Bomb From F-15 Over Nevada
“However, this could be an attempt to show that the US is developing something new to scare them,” Glazunov continued.

On August 8, the United States completed a second series of flight tests for an upgraded version of its B-61 nuclear bomb, following the first tests in March.

The tests were conducted as part of a program to extend the life of the B61 gravity bomb, which is one of the main pillars of the US Air Force’s nuclear arsenal.

“The B61-12 life extension program is progressing on schedule to meet national security requirements,” Phil Calbos, acting NNSA deputy administrator for defense programs, said. “These realistic flight qualification tests validate the design of the B61-12 when it comes to system performance.”

© Wikipedia / United States Department of Defense
Russia Considers US Nuclear Bomb Test 'Open Provocation'
The March tests, like the August one, were carried out by F-15E fighter jets at Tonopah Test Range.

The B61, one of the main elements of the US nuclear triad, is an upgraded version of a nuclear bomb developed in the late-1960s. It is described as the most dangerous nuclear device ever produced because its yield can be adjusted between the equivalent of 50,000 tons and 300 tons of TNT.