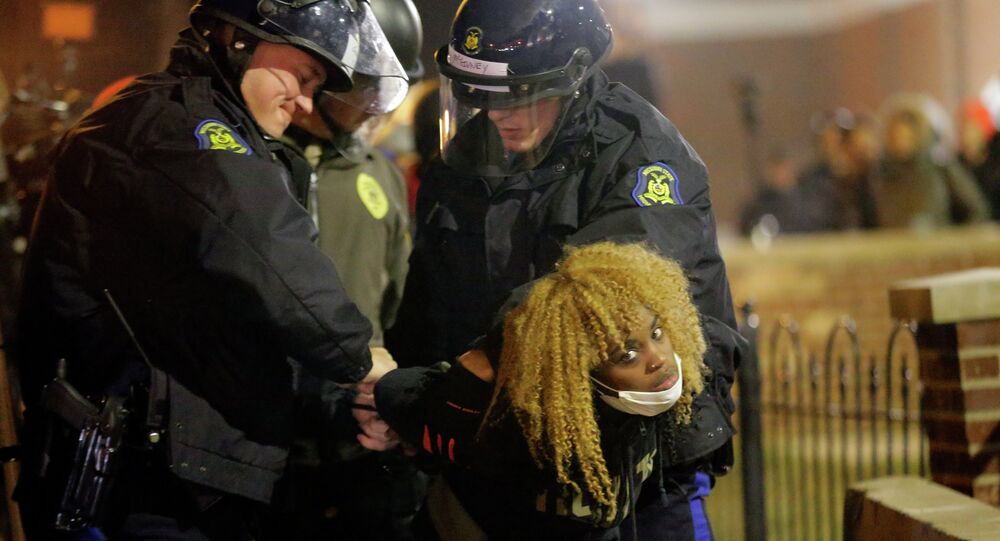 Trump's Lifting Ban on Military Gear: 'People Are Going to Get Killed'

Donald Trump's latest executive order on lifting the ban on deliveries of military equipment to US police has prompted controversy. Instead of ensuring domestic security, Trump's measure is likely to ruin trust and deepen the racism scandal-marred rift between the American people and law enforcement, experts told Sputnik.

Donald Trump's decision to ensure domestic security by restoring the flow of surplus military gear to police may have precisely the opposite effect, according to Dr. Thomas Nolan, an associate professor of criminology at Merrimack College and former senior policy analyst in the Office of Civil Rights and Civil Liberties at the Department of Homeland Security in Washington, DC.

On Monday, President Trump signed an executive order to lift the ban on the delivery of surplus military equipment to local and state police imposed by the Obama administration. The measure was taken less than a month after a white nationalist rally in Charlottesville.

"These restrictions went too far, we will not put superficial concerns above public safety, we will do our best to get you what you need," Attorney General Jeff Sessions told the national convention of the Fraternal Order of Police in Nashville, Tennessee, on August 28.

© Flickr / alexbcthompson
Trump Authorizes Military Hardware Transfer to Local Police Forces
The Pentagon's 1033 program, suspended by President Obama in 2015, envisaged giving police departments specific military equipment such as grenade launchers, high-caliber weapons and armored vehicles. The restrictions came in response to fierce public discontent with how the equipment was used by the police during protests and riots in Ferguson, Missouri, back in 2014.

"I have never seen any empirical evidence that shows that the deployment of military weapons, and aircraft, and military vehicles has any significant effect on lowering the crime rates," Dr. Nolan, who is also a 27-year veteran of the Boston Police Department, emphasized.

Referring to the heated unrest in Ferguson in 2014 against police racism and brutality, the veteran stressed that the "use of weapons, vehicles, aircrafts and military uniforms actually creates and widens the divide between the police and the communities that they work in."

He highlighted that Obama's ban had a certain effect "lowering the volume of disconnect" between ordinary Americans and police, which was demonstrated during the Ferguson unrest. In that sense, he added, Trump's recent move will be especially counterproductive.

Dr. Gali Perry, a research fellow at the Institute of Criminology of the Hebrew University of Jerusalem, echoes Nolan.

"There is no supporting evidence for any long-term crime drop in regard to police using paramilitary gear," she told Radio Sputnik.

The Israeli academic emphasized the importance of mutual trust between police and ordinary civilians. Alas, the military equipment used by law enforcement personnel could easily ruin this trust.

© AP Photo / Lynne Sladky
Trump's Decision to Give Military Weapons to Police Slammed as 'Defying Logic'
Dr. Perry underscored that the heavier police officers are armed, the less the general public trusts them. This is both a technical and psychological issue, the Israeli expert explained.

The crux of the matter, according to Dr. Perry, is that "when they [people] see military gear carried by police officers they tend to perceive the police as the enemy … and they see the process as a battlefield," she pointed out.

The Black Lives Matter (BLM) movement formed the core of the protest with hundreds of activists arriving in Ferguson, where violent clashes between law enforcement and the protesters erupted.

In the second wave, in late November 2014, the protests nearly spiraled out of control after officer Wilson had not been indicted.

Thousands of people took to the streets in more than 170 US cities. The BLM played a key role in facilitating the nationwide movement. The organization emerged after the acquittal of white neighborhood watch captain George Zimmerman who shot dead African-American teen Trayvon Martin on February 26, 2012.

The protests, which continued across the country until 2015, further fueled heated debates about police racism, brutality and militarization.

According to Fatal Encounters, a nonprofit group that tracks deaths during police altercations, as many as 2,902 people in the United States have been shot and killed by police officers since Brown's death.

The racism debate, which was calmed by the Obama ban, was invigorated again amid the clashes between demonstrators and their opponents during a white supremacist rally in Charlottesville on August 11-12.

The clashes left one woman dead and nearly 20 others injured. The tragedy prompted fears of an upsurge in ultra-right wing movements. As a result, right-wing rallies scheduled to be held in San Francisco and Berkeley were canceled.