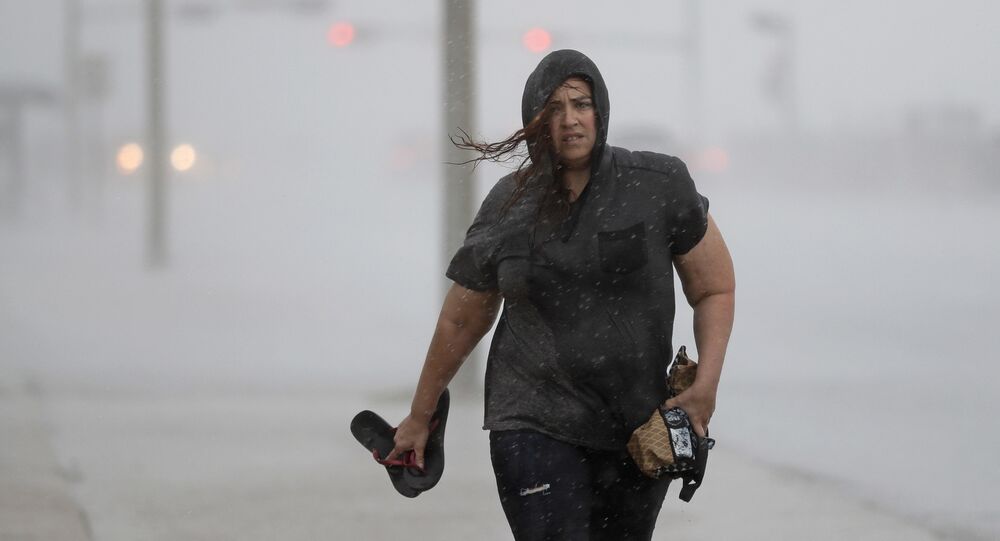 With winds measuring at 130 mph, Hurricane Harvey has been upped to a Category 4 as the storm has come ashore in Texas.

The US National Hurricane Center has announced that the eye of the powerful Hurricane Harvey has come ashore in Texas.

"Eye of category 4 Harvey makes landfall between Port Aransas and Port O'Connor Texas," the agency said on its website.

The storm was upgraded overnight to a category 4. The NHC said it expected heavy rainfall and storm surge to cause catastrophic flooding.

Harvey could be the largest hurricane to strike the US mainland in at least a decade, according to weather forecasts.

​Officials at the National Hurricane Center have called Harvey a "life-threatening storm." Patrick Rios, mayor pro tempore of Rockport, Texas, is offering an even grimmer view of the storm, as he advises residents to write identifying information on their arms if they chose to stay and wait out the storm.

"We're suggesting if people are going to stay here, mark their arm with a Sharpie pen with their name and Social Security number," Rios announced at a morning press conference.

Residents who have decided to stay in the area have stocked up on food, water and gas, while others who boarded up their homes and businesses headed for safety.

​​According to officials, even after Harvey has left the region its effects will likely linger for days, ultimately leaving as much as 40 inches of rainfall in some areas from Friday through Wednesday. The National Weather Service reported storm surge waters could reach 6 to 12 feet above ground level.

​Hal Needham, a Galveston-based storm surge expert, suggested it was "becoming more and more likely that something really bad is going to happen."

​If the system fails to lose a significant amount of strength, it will be the fiercest hurricane to hit the US within 13 years.

​"We know that we've got millions of people who are going to feel the impact of this storm," Dennis Feltgen, a spokesman and meteorologist for the National Hurricane Center, told AP Friday. "We really pray that people are listening to their emergency managers and get out of harm's way."

​On pace to be the worst in years, some are speculating Harvey will set off conditions worse than those initially witnessed when Hurricane Katrina made landfall in 2005.

​"In terms of economic impact, Harvey will probably be on par with Hurricane Katrina," Brian McNoldy, hurricane researcher from the University of Miami, told AP. " The Houston area and Corpus Christi are going to be a mess for a long time."

Trump Administration has made it a point to assert they are ready if affected areas require its assistance.

Texas Governor Greg Abbott told residents in Harvey's path to "strongly consider evacuating" and to "put your life first and your property second."

Abbott previously launched a state of emergency Wednesday in 30 counties in an effort to speed up deployment of resources to potentially affected areas.