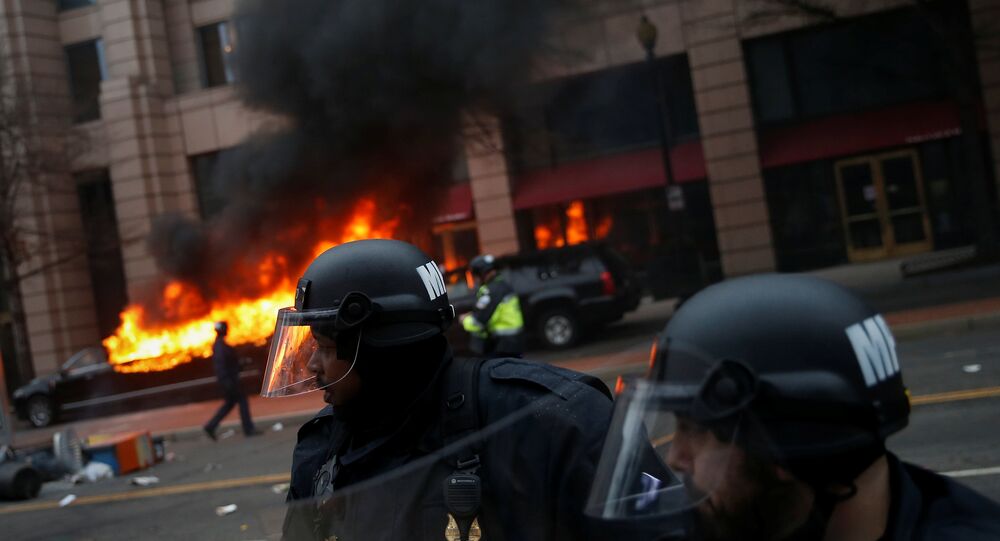 A Washington, DC, Superior Court Judge has mostly shot down a Department of Justice (DoJ) warrant seeking to get web provider Dreamhost to hand over information about individuals who visited the website of DisruptJ20 - the organized January protests against the inauguration of US President Donald Trump.

Chief Judge Robert Morin ordered Dreamhost to turn over the data of visitors to disruptj20.org, the website of an anti-Trump group whose stated goal was to obstruct Trump's public inauguration and force it "behind closed doors, showing the true face of the security state Trump will preside over." However, Morin only approved the seizure of information of protesters suspected of felony rioting.

The DoJ pushed for a bulk handover of information, and Morin said during the Thursday hearing that there was tension between the free speech rights of DisruptJ20 members and the DoJ's desire to search digital records for evidence that could aid in a criminal investigation.

Morin said that he would personally oversee the review of the data and that the DoJ must explain its methods to ensure that the data of "innocent users" not suspected of wrongdoing is left alone.

"I'm trying to balance the First Amendment protections and the government's need for this information," Morin said during his decision. "My view here is that this best protects both legitimate interests."

Dreamhost claimed victory in the lawsuit on their blog. "Sometimes big wins don't look like big wins," they wrote on Thursday. "Sometimes they look like a lot of little wins, all strung together! That's what's happened here. The de-scoping of the original warrant, combined with the court's additional restrictions on the use of, and access to, that data, is a clear victory for user privacy."

The US Department of Justice claims to want the information because they suspect a link between DisruptJ20 and the violent, riotous and vandalistic activities undertaken by some Inauguration Day protesters. The Inauguration Day violence led to 230 arrests; almost 200 of them still face felony riot charges seven months later. 19 of those arrested have pled guilty, while about a dozen have been released.

Dreamhost initially resisted the warrant on the grounds that it was much too broad: it wanted the information of 1.3 million people who visited the organization's website, including those who may have simply visited the website out of curiosity.

The Justice Department then narrowed the scope of their warrant to exclude IP addresses and those who visited the website after the inauguration. Dreamhost wrote that they "appreciate the DOJ's willingness to look at and reconsider both the scope and the depth of their original request for records," but said that the warrant was still too broad, as it would still collect emails sent to DisruptJ20.

The DoJ denied the accusations of unconstitutional government overreach from the likes of Menefee-Libbey as well as the American Civil Liberties Union (ACLU), which called it a "clear threat to Constitutional rights" on an August 15 blog post.

"…[T]he government is focused on the criminal acts of defendants and their co-conspirators, and not their political views — and certainly not the lawful activities of peaceful protesters. Similarly, the government is focused on the use of the [DisruptJ20] Website to organize, to plan, and to effect a criminal act — that is, a riot. The government has no interest in seizing data from the Website that does not relate to this limited purpose," read the DoJ's court filing.

The Fourth Amendment to the US Constitution protects American citizens "against unreasonable searches and seizures." This includes "general warrants," where law enforcement seize a large quantity of information or material because they believe some fraction of it may be relevant to a criminal investigation.