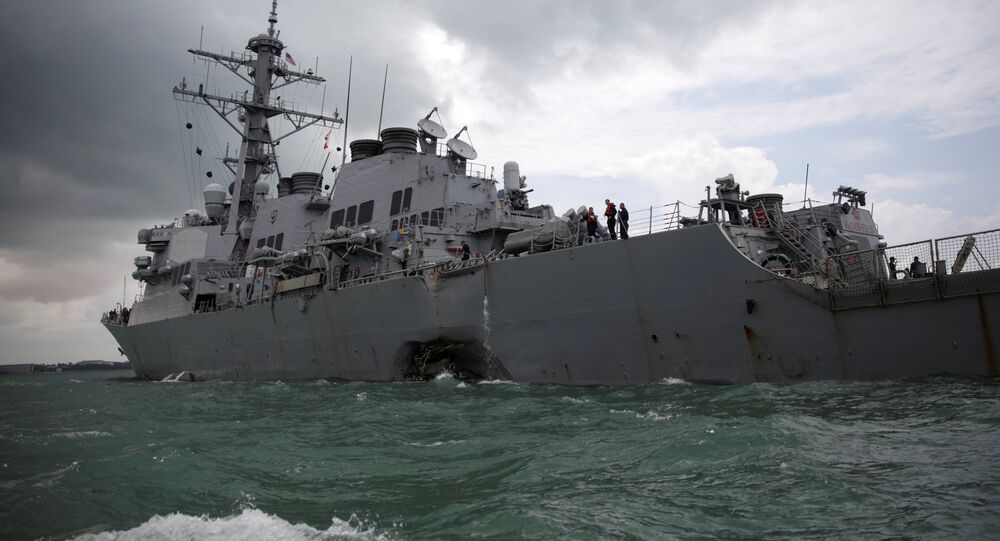 The human remains found in the sea by Malaysian forces are not of any of the US sailors who went missing after the USS John S. McCain collided with a merchant vessel, the US Navy's Seventh Fleet said Thursday.

MOSCOW (Sputnik) — The Malaysian navy discovered the remains while searching the area where the guided-missile destroyer collided with a merchant vessel.

"The remains found by the Royal Malaysian Navy are not those of a USS John S. McCain (DDG 56) Sailor," the statement said.

© REUTERS / Ahmad Masood
US Warships... That Sinking Feeling
The US destroyer John S. McCain collided with a merchant vessel the Alnic MC. near Singapore on Monday. Several US sailors were injured, while several others were said to be missing. A US Navy Pacific Fleet commander said earlier this week that divers had located human remains inside the flooded compartments of the destroyer. However, the Navy has not disclosed specifics regarding numbers of missing or dead sailors.

On Wednesday, US Navy Seventh Fleet Commander Vice Adm. Joseph Aucoin was dismissed due to the loss of confidence following the deadly accident.

The McCain is the second Seventh Fleet ship to collide with another vessel this summer and the fourth since January. In June, seven sailors were killed in a separate incident when the US destroyer Fitzgerald hit a cargo ship off the coast of Japan. Both vessels belong the Seventh Fleet.