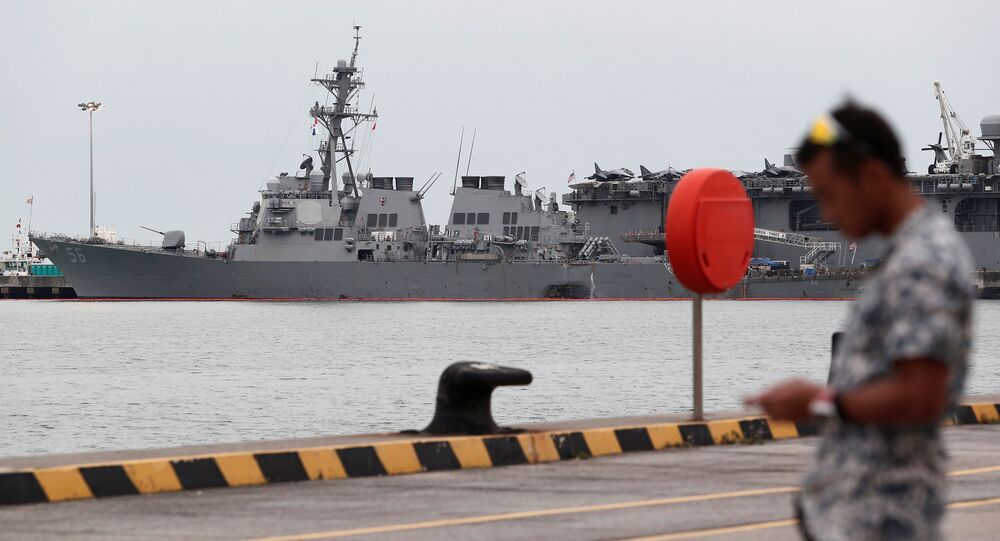 What's Behind Increasing Numbers of Collisions Involving US Warships

The collision of the USS John S. McCain destroyer with a merchant vessel near Singapore is a wake-up call since it was not the first such incident involving American warships possibly neglecting navigation rules, according to Russian journalist and political commentator Alexander Khrolenko.

"There are dozens of ships passing through the Asian straits at the same time. But there are the rules of safety navigation that must not be ignored. But this is not the first incident of the kind. All of them arise from American exceptionalism and the ever growing US military presence in the global ocean. The US Navy regularly ignored navigation rules and endangers the safety of other countries’ ships," Khrolenko wrote in an op-ed for RIA Novosti.

© REUTERS / KCNA
‘Operational Pause’: Second US Navy Accident Disrupts Ballistic Missile Defenses
On Monday, the USS John S. McCain collided with the Alnic, a Liberian-flagged, 30,000 ton, 183-meter oil and chemical tanker. Five American sailors were injured and another 10 were missing. On Tuesday, it was reported that remains of US sailors were found in the flooded compartments of the damaged ship.

The USS John S. McCain is an Arleigh-Burke class destroyer, with a length of some 150 meters and a displacement of 6,600 tons. The ship is equipped with the Aegis anti-missile system, including several power radio-radars.

© AP Photo
'They Did Nothing Until Last Second': Initial Probe Indicates US Navy at Fault for Destroyer Fitzgerald Collision
"It just cannot be that none of the destroyer’s crew noticed their dangerous approach with another vessel," the author noted.

Khrolenko suggested that the crew might have known about the possible collision but expected that the other vessel would move aside.

"The old joke about a US aircraft carrier and a lighthouse comes to mind. But the consequences, first of all a total of 17 American sailors killed in these incidents, are not a joke," the author underscored.

Moreover, according to Khrolenko, such incidents are a bad contribution to navigation safety.

Earlier, the Chinese Foreign Ministry expressed concern over the increasing number of collisions involving US warships and the subsequent risks for navigation in the region, including in the South China Sea.

Before the latest collision between a US destroyer and an oil tanker, earlier in June another US destroyer, the USS Fitzgerald, crashed into a cargo ship off Japan. That incident resulted in the death of seven US crew members.

In May, another US guided-missile warship collided with a South Korean fishing vessel. A fourth accident this year occurred when a US warship ran aground while approaching Japan.