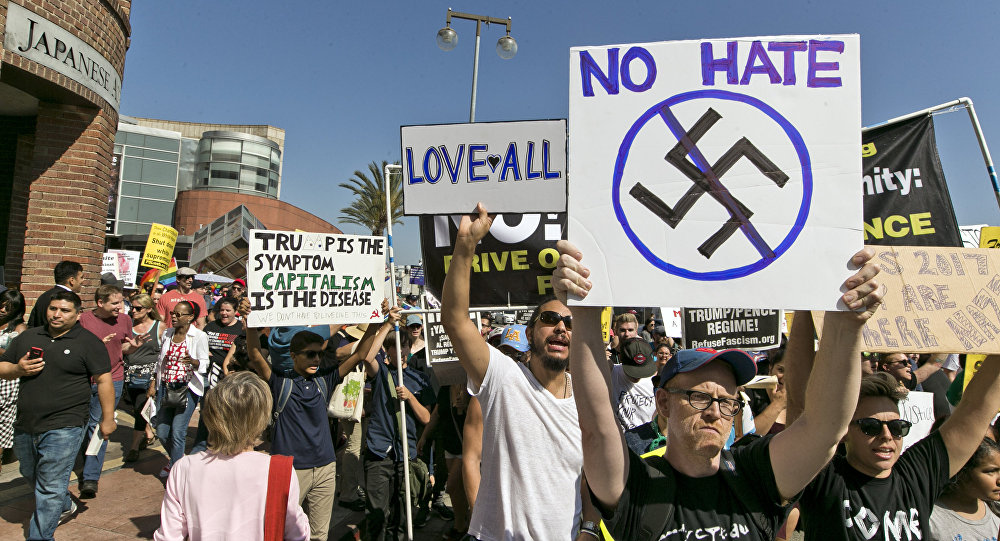 Officials in the US city of Boston are stepping up security ahead of a planned right-wing "Free Speech" rally alongside simultaneous counter-protests expected on Saturday in the aftermath of the violent white nationalist protest in Charlottesville, Virginia, last weekend.

WASHINGTON (Sputnik) — The Boston Free Speech Rally is expected to draw up to 1,000 people to Boston Common public park downtown, while counter-demonstrations across the city could attract more than 20,000 participants. Counter-protesters will march toward Boston Common, where police will attempt to keep rival demonstrators separated.

More than 500 police officers, both uniformed and undercover, will be on hand on Saturday, Boston Mayor Marty Walsh said at a news conference on Friday.

"We are taking every precaution necessary to keep our city safe," Walsh told reporters.

Organizers of the Free Speech rally told Sputnik that they want to speak out against efforts to silence certain political opinions and do not promote white supremacist thinking or racism.

"We have repeatedly denounced ideologies that promote hate or violence, especially along racial lines," Garrett Kirkland, an organizer with the Boston Free Speech Coalition, said.

The group staged a similar demonstration in May, drawing libertarians and supporters of President Donald Trump, as well as far-right groups such as the Oathkeepers and American Patriot Three Percenters.

The latter two groups attended the "Unite the Right" rally in Charlottesville, Virginia, where violent clashes erupted between protesters and counter-demonstrators. The violence culminated when a Nazi supporter slammed his car into a group of counter-demonstrators, killing 32-year-old Heather Heyer and leaving 19 others injured.

© AP Photo / Steve Helber
Charlottesville Mayor Calls on State Assembly to Remove Confederate Statues
Though Free Speech Rally organizers insist that they do not want their event "hijacked" by white supremacists, the rally appears to have become a magnet for racist groups across the state.

Thomas Robb, the national director of the Knights of the Ku Klux Klan (KKK), told the Boston Herald that members from the city and the western part of the state of Massachusetts are planning to attend the rally.

Shiva Ayyadurai, an Indian-born American who is running for the US Senate, and Samson Racioppi, a congressional candidate, are also slated to speak at the event, Kirkland said.

As the Free Speech rally begins downtown, tens of thousands of protesters are expected to gather in the nearby neighborhood of Roxbury for a Fight Supremacy Rally, whose participants will march on Boston Common.

The counter-protest's organizers reject all assertions that the Free Speech rally does not promote hate, insisting that it is part of a national trend in which white supremacists have been emboldened by the Trump administration.

Trump has faced mounting criticism for failing to immediately condemn the violence in Charlottesville, and later blaming "both sides" for the clashes. Even members of Trump's own Republican party have criticized his response, with some such as former Republican presidential candidate Mitt Romney calling on the president to apologize.

The leaders of the Fight Supremacy rally say they organized the event not only to "send a message to those would subject marginalized communities to domestic white terrorism, hate speech and violence," but also to oppose all forms of white supremacy.

"Saturday’s rally will stand in defiance of these abuses and amplify the voices and truths of the most marginalized," they said.

More than 37,000 people say they're either planning to attend or interested in attending the march, according to the event's Facebook page.

© AP Photo / Damian Dovarganes
French President Expresses Support for Fight Against Racism in Charlottesville
Several other counter-protests will be staged throughout the city, with numerous other groups planning to link up with the Fight Supremacy rally.

The ANSWER Coalition and the Coalition to Organize and Mobilize Boston Against Trump will gather near Boston Common for a "Stand for Solidarity" rally. The protesters will meet at the Massachusetts State House before merging their demonstration with the Fight Supremacy march.

Meanwhile, the American Federation of Labor and Congress of Industrial Organizations (AFL-CIO) will rally in the Roxbury neighborhood before joining in the Fight Supremacy march.

"We call on President Trump to unequivocally reject white supremacy and racism," AFL-CIO Massachusetts President Steven Tolman said in a statement on Friday. "As a labor movement, as a Commonwealth and as a nation we have a moral obligation to stand up for the right of all people to live without fear and to stand against racism, anti-Semitism and bigotry in all forms."

The NAACP Boston Branch will also gather in Roxbury to march alongside the Fight Supremacy protesters.

"At the core of the march is the demand for racial justice," the group said in a statement on Friday.

The Boston Police Department expects large crowds to descend on the city for the protests and has a comprehensive operational plan in place, Mayor Walsh said.

Weapons, sharp objects, sticks and any other items that could be used as weapons will be banned from Boston Common, and police officers will be searching bags, a police department community advisory said.

Evans said officers would respect people's right to protest, but would show no tolerance toward trouble-makers.

"We're aware that some people might have an agenda to basically try to disrupt, and those are the people we're really going to focus on," Evans said at a news conference on Friday.

One such group that law enforcement is likely to closely monitor is Antifa, a militant anti-fascist group that has called for a "Confront Fascism" rally on Boston Common at the same time as the Free Speech protest.

"I hope tomorrow everyone who protests and is marching is doing it for the right reason," Evans said.