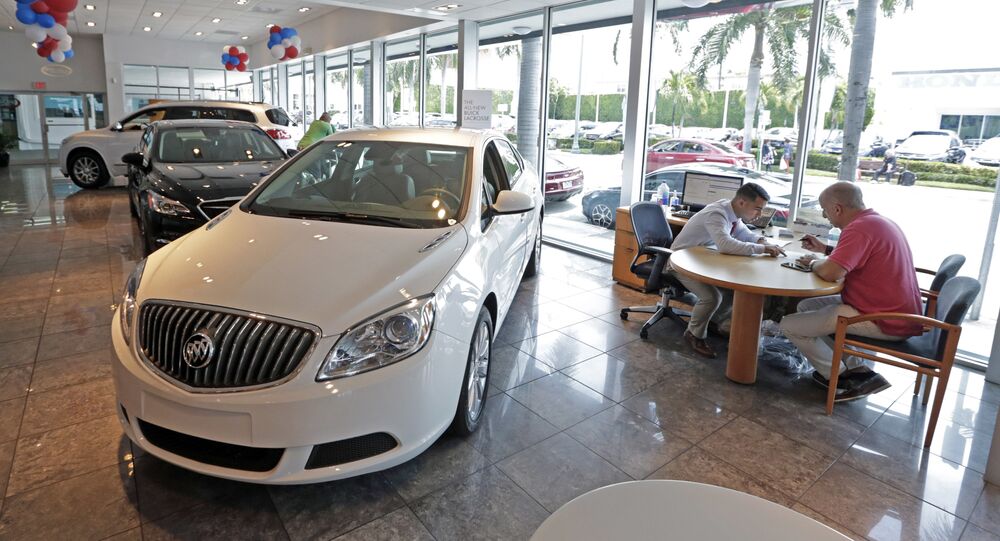 US consumers kept borrowing at a quicker pace in the second quarter of 2017, resulting in significant further gains in total debt outstanding, accompanied by a rising delinquency rate; as a result, the US faces the risk of an across-the-board consumer market slowdown.

Kristian Rouz – After surpassing its 2008 highs in the first quarter, US household indebtedness posted fresh record highs in Q2, driven primarily by an expansion in the credit card segment. The high levels of debt are hindering US economic growth by affecting broader consumer sentiment, which explains the tepid gains in inflation between May and July.

Unless US salaries and wages pick up in the near-term, rising interest rates, coupled with soaring household debt are poised to hamper the effective purchasing power and consumer demand, thus holding back any substantial improvements in the GDP outlook.

© AFP 2020 / TIMOTHY A. CLARY
A Decade of Financial Crisis: Working Class Still Suffers as Banks are Protected
US household debt outstanding rose to $12.84 trln in the second quarter, up $552 bln from a year ago, the Federal Reserve Bank of New York said in a report. In addition to surging credit card debt, mortgages and auto loans also expanded, along with the rising delinquency rates across all three major segments.

According to a separate report from the US Commerce Department, consumer spending slowed in June due to the weak gains in household incomes. The increasing debt burden exacerbates the situation, leaving many US consumers stripped of disposable cash at-hand.

"America's credit card balances have never been higher, but there's no reason to think they won't just keep climbing," Matt Schulz of CreditCards.com said. "Combine that with steadily rising interest rates and you have a potentially volatile mix."

The ongoing Federal Reserve policy tightening cycle means that interest rates will keep climbing, and within such a policy framework, consumers on the savings side will benefit, while the heavily-indebted consumers of the spending side will feel increasing pressure from debt-servicing costs in the low wage-growth environment.

The Federal Reserve also said that roughly 4.8 percent of total household debt is delinquent, meaning the borrowers have failed to furnish their next debt payment 90 days or more after the due date.

The gains in household indebtedness are driven by the still-low borrowing costs, as well as rising home prices and robust job creation. Even though most new jobs are low-paying, these payrolls allow for a fairly inexpensive refinancing of existing and often delinquent loans, contributing to the rise in the debt burden.

© AFP 2020 / Daniel Roland
Global Central Bank Planning Pivots to Ending the Cheap Money Era
Even though the expansion in household debt might drive economic growth in the near-to-medium-term, the current borrow-and-spend cycle is wearing off after eight years of loose monetary policies. The near-zero borrowing costs during the years of the Obama administration had contributed to the rapid expansion of the current debt burden, and as delinquency rates are rising, the US economy might be facing a $13-trillion bubble that might undermine its main driver of economic growth.

Consumer spending drives over 70 percent of the US GDP, and the current delinquency trends are suggesting that broader consumer distress might be around the corner.

Total US consumer debt is currently 14 percent above its most recent lows, recorded during the economic crisis of 2007-2009. While the consumer debt market is becoming increasingly volatile, some degree of deleveraging could be a smart personal finance strategy. However, many Americans can’t afford to pay off at least parts of their debt, as salaries and wages remain compressed due to the low structural efficiency of the economy.