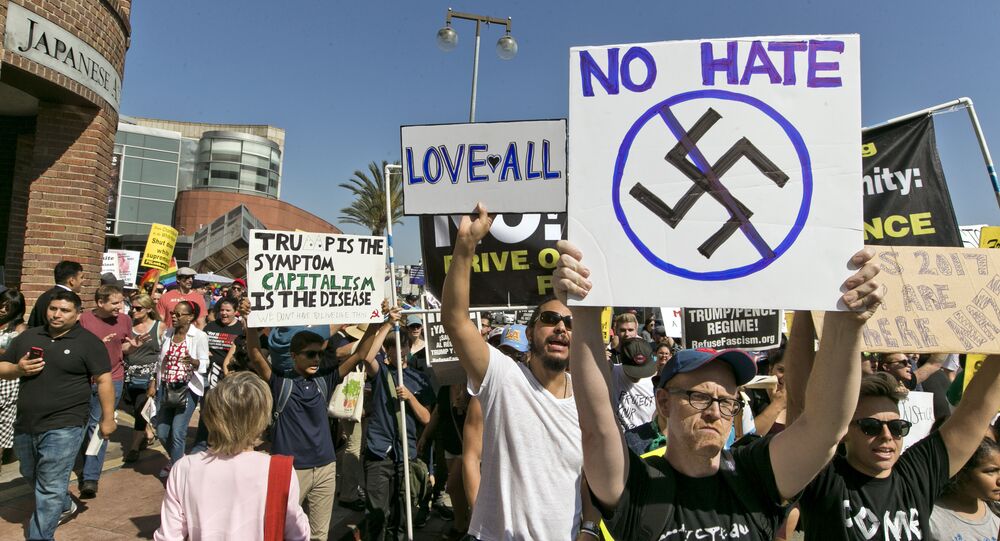 Several US cities saw rallies of anti-fascist organizations held on Sunday in solidarity with victims of the clashes with the ultra-right radical nationalist groups and the car ramming attack in the city of Charlottesville, Virginia.

WASHINGTON (Sputnik) — The major "Unite the Right" rally organized by far-right nationalists took place in Charlottesville on Saturday as a protest against the authorities' plans to remove a monument to Confederate Gen. Robert E. Lee from a city park. The violent clashes between the far-right rallies and counterprotesters prompted the governor of Virginia, Terry McAuliffe, to declare a state of emergency in Charlottesville on Saturday. One person was killed and another 34 injured as a result of the incidents in Charlottesville. Also, two police officers were killed as a result of the helicopter crash near the city, while monitoring the clashes.

First clashes between the protesters and their opponents, as well as arrests, began on Friday, when hundreds of ultra-right activists held a torchlight procession through the city. According to various estimates, several hundreds to several thousands of far-right activists arrived in the city, including members of neo-Nazi organizations and the Ku Klux Klan.

Solidarity rallies took place on Sunday, in particular, in such large cities as New York, Los Angeles (California), Seattle (Washington), Atlanta (Georgia) and Denver (Colorado). Their participants protested the actions of right-wing radical groups and demanded US President Donald Trump to condemn their activities. In a number of cases, the protesters demanded the monuments to the Civil War heroes from the side of the Confederates to be removed.

On videos published by the participants of the rally in Seattle, they can be heard chanting "We are together with Charlottesville." Demonstrators carried a banner in the form of a huge copy of the US Declaration of Independence with thousands of signatures of the participants. Many also carried red flags, symbols of socialists. However, the rally also confronted the police, which were forced to use tear gas, truncheons and light-and-noise grenades. There were no reports about how many people had been injured in the clashes.

Antifa is currently attacking police in Seattle in the hopes of then attacking a Patriot Prayer Rally. pic.twitter.com/nNz8e5ST2k

© REUTERS / Jim Bourg
‘Only One Side': Obama and Biden Add to Voices Against Racism
In Atlanta, the anti-hate demonstration was calmer: the activists carried banners saying "We are not afraid" and "This is what democracy looks like."

Supporters of ultra-right groups protested against the plans of the authorities to remove a monument to Robert Edward Lee, the commander of the Confederate Army of Northern Virginia in the US Civil War, from the Emancipation Park in Charlottesville.

Earlier, some US politicians have already criticized Trump for what he said, or rather, for what he did not say about the events in Charlottesville. The president, although condemning the clashes in the city in the most decisive expressions, avoided using such terms as "homegrown terrorism," as many democrats and opponents of the ultra-rights insisted. In addition, Trump said that he condemned the violence "from all sides," while his opponents insisted that the violence came from the right-wing radical activists exclusively.

Tom Bossert, the White House homeland security adviser, has defended Trump's statement on violence organized by white supremacists in Virginia, and said that the president avoided direct condemnation of the far-right groups in order not to "dignify" the movement.