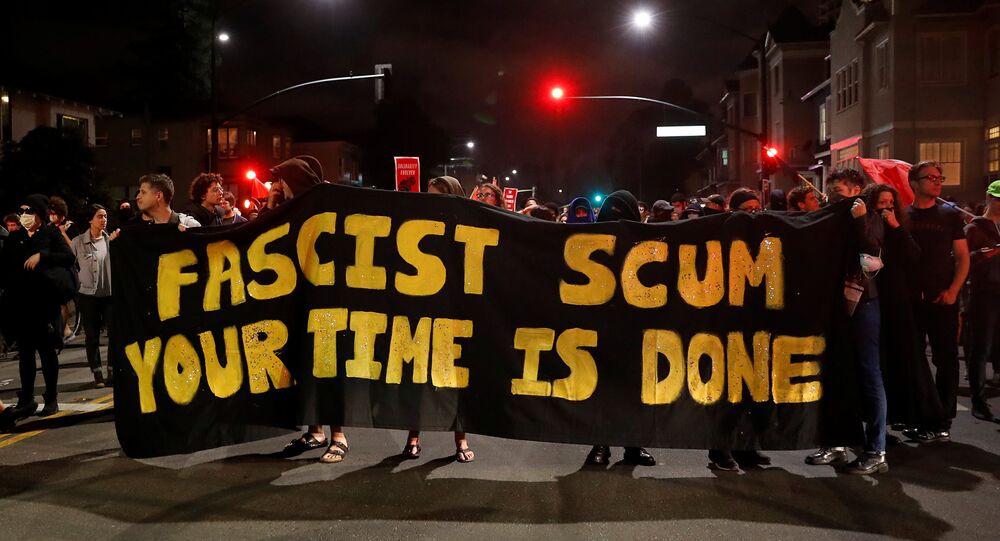 The suspected driver of a car which plowed into a crowd of counterprotesters against the white supremacist rallies in Charlottesville on Saturday, was a Nazi sympathizer, US media reported Monday.

© AP Photo / Steve Helber
Injured in Charlottesville Violence Blame City Officials
MOSCOW (Sputnik) — On Sunday, Charlottesville police said James Alex Fields Jr., 20, has been arrested and charged with multiple offences over the car ramming incident which took place in amid the violent clashes between the far-right ralliers and their opponents.

The Washington Post newspaper reported citing Fields' school teacher Derek Weimer, that back in high school, the young man had had supremacist views and had "fascination" with Nazism.

Richard Spencer, a leader in the white supremacist movement and author of "alt-right" term, reportedly said that he had been told Fields had been a member of Vanguard America. The movement, describing itself as the "Face of American Fascism" said in a statement on Sunday, that the driver of the vehicle that had hit the counterprotesters, had not been its member.

Video of car hitting anti-racist protestors. Let there be no confusion: this was deliberate terrorism. My prayers with victims. Stay home. pic.twitter.com/MUOZs71Pf4

​Charlottesville government said in a statement on Sunday, that casualties resulted from a crash of three vehicles including a car allegedly driven by Fields.

The city's police said in a statement on Sunday, that Fields had been charged with one count of second degree murder, three counts of malicious wounding, and one count of hit and run attended failure to stop with injury.

The major "Unite the Right" rally organized by far-right nationalists took place in Charlottesville on Saturday as a protest against the authorities' plans to remove a monument to Confederate Gen. Robert E. Lee from a city park. The violent clashes between the far-right rallies and counterprotesters prompted Governor of the US state of Virginia Terry McAuliffe to declare a state of emergency in Charlottesville on Saturday.