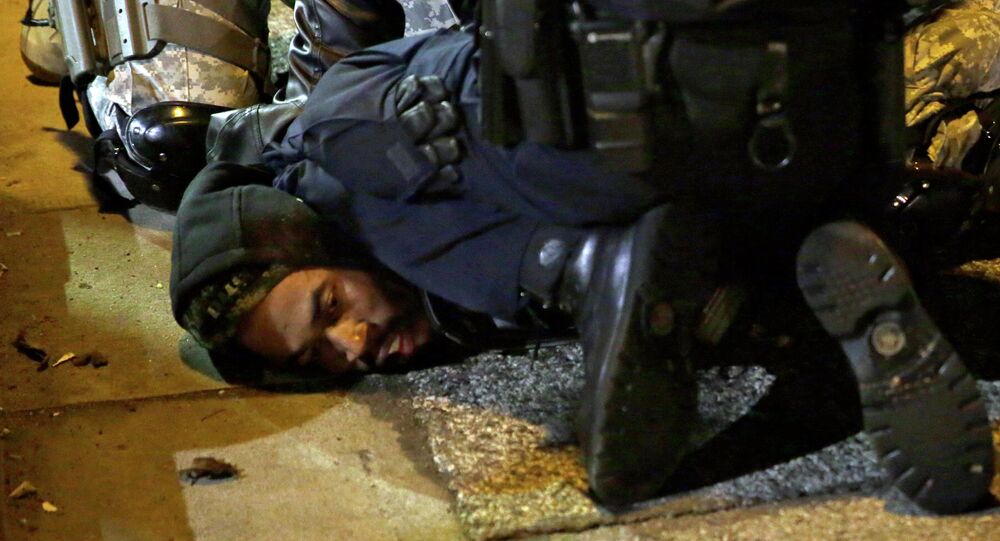 Three years after the fatal police shooting of Michael Brown touched off riots in the US city of Ferguson, Missouri, activists say the United States is still facing an epidemic of police brutality.

Youtube/ Police Network
WATCH: Las Vegas Police Release Body Cam Footage of Suspect Firing on Them
WASHINGTON (Sputnik) — On August 9, 2014, then-Police Officer Darren Wilson, 28, shot and killed Brown, an unarmed 18-year-old black man. The days that followed the killing saw an eruption of mass protests and riots throughout the city of Ferguson. Wilson said he shot Brown in self-defense, and a grand jury later decided not to indict him.

Though the case against Wilson was swiftly resolved, the shooting sparked an ongoing national debate about police brutality, the militarization of law enforcement and the value of black lives in America.

On Wednesday, hundreds of activists and social media bloggers weighed in on that debate, using the hashtag #MikeBrown to pay call for an end to police brutality.

"Three years ago today #MikeBrown was killed in Ferguson. We must end the epidemic of police violence against unarmed boys and men of color," the American Civil Liberties Union said in a Twitter post on Wednesday.

"We remember #MikeBrown. We will do more than mourn his death. We pledge to work to dismantle white supremacy and end police brutality," the activist group Steadfast Strategies wrote in a Twitter post.

"Today, we remember #MikeBrown and recommit to ensuring truth, transparency, and trust in our criminal justice system," US Congresswoman Kamala Harris wrote in a Twitter post.

© AP Photo / Scott Roth
New York Police Use Pepper Spray to Break Up Massive Fight (VIDEO)
According to Fatal Encounters, a nonprofit group that tracks deaths during police interaction, as many as 2,902 people in the United States have been shot and killed by police officers since Brown's death.

But not all Americans consider police brutality a problem, and many blame the victims in such incidents.

Scores of social media bloggers used the hashtag #MikeBrown to post criticism of Brown himself and praise the country's police forces, an indication that the national debate over police brutality is still raging.

"#MikeBrown wasn't a kid. He was an 18 year old man (legal adult, not a "kid") who should have known better than to bum rush a police officer," Cleo Eyre wrote in a Twitter post.

Others pointed to the fact that Brown had robbed a convenience store before he was fatally shot. Some even posted screen grabs from the surveillance video of the robbery.

But in the town of Ferguson, the sentiment among a community still tending its wounds was less divided.

Activists and residents gathered on Tuesday night in Ferguson at the spot where Brown was killed to honor his memory, and more similar gatherings were expected on Wednesday.

"We can never forget this," activist Meldon Moffitt said at the gathering on Tuesday night. "This is ground zero."

Residents placed teddy bears, heart-shaped balloons, flowers, candles and other tokens where Brown died, and where his body laid on the street for five hours after his killing.