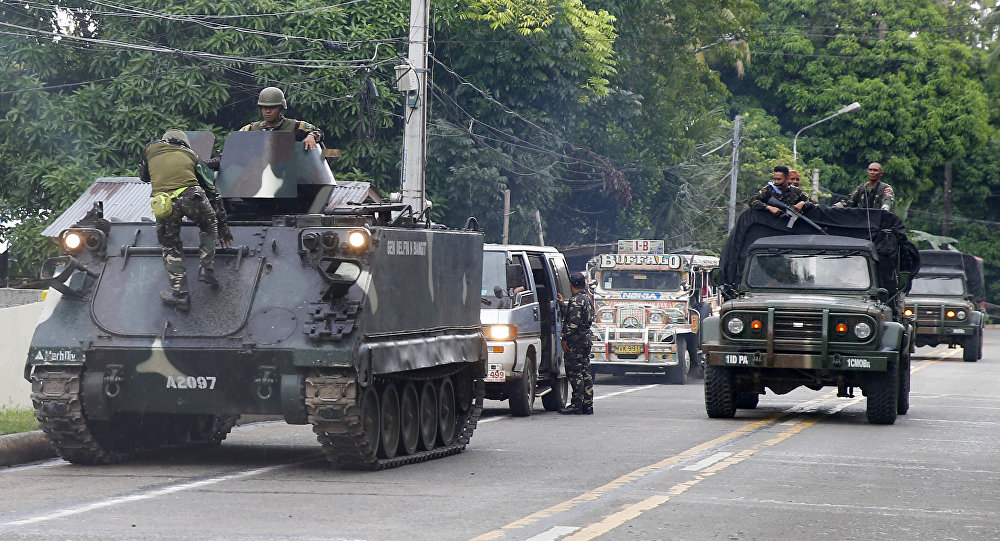 Washington may launch a military operation that would allow the US military to conduct airstrikes against Daesh (banned in Russia) positions in the Philippines, US media reported citing two defense officials.

© REUTERS / Romeo Ranoco
Time Bomb Ticking: Threat of Daesh Hangs Over Southeast Asia
MOSCOW (Sputnik) – According to the NBC broadcaster's Monday report, the plan to start the operation, which is currently being considered by the US Department of Defense, may be announced later in the day.

The broadcaster also noted that the airstrikes are likely to be carried out by drones.

In the event the plan is approved, US servicemen will be authorized to attack militants who threaten US allies in the region that fight Daesh threat on the ground. One such ally is the Philippine Armed Forces.

The broadcaster cited Pentagon spokesman Capt. Jeff Davis as saying that Washington and Manila have been sharing intelligence for quite some time and that the Philippines has for 15 years been hosting US servicemen who support the state in its counterterrorism efforts.

On May 25, Duterte declared martial law on the southern island of Mindanao, which is often subjected to attacks by Daesh-linked terror groups. Marawi has remained the primary hotspot ever since the Maute group attempted to storm the city.

In June, the US embassy in the Philippines announced that American forces started providing assistance to the embattled Filipino troops in the southern regions of the archipelago.

Following the announcement, President Duterte said that he "never approached America" for military assistance and was "not aware of that until they arrived." Addressing the apparent insubordination of his own military, he remarked that "our soldiers are pro-American, that I cannot deny."

Rodrigo Duterte was inaugurated as Filipino President in June 2016.

© Photo : YouTube/Youtupe Mania
Philippine, US Navies Patrol Sulu Sea Together Despite Duterte’s Hostility to Washington
The Philippines–US relations under Duterte have been turbulent since his inauguration. On one occasion, Duterte called former US president Barack Obama a "son of a whore," vowed to close US bases in the island archipelago and claimed that Russia and China will provide the only military and financial assistance his country needs.

When current US President Donald Trump invited Duterte to the White House during a phone call in April, this move sparked heavy criticism in Washington. Massachusetts Congressman James McGovern who told a hearing of the Tom Lantos Human Rights Commission that he would protest against such a visit.

"So what makes that guy think I'll go to America?" Duterte told reporters. "I've seen America and it's lousy."