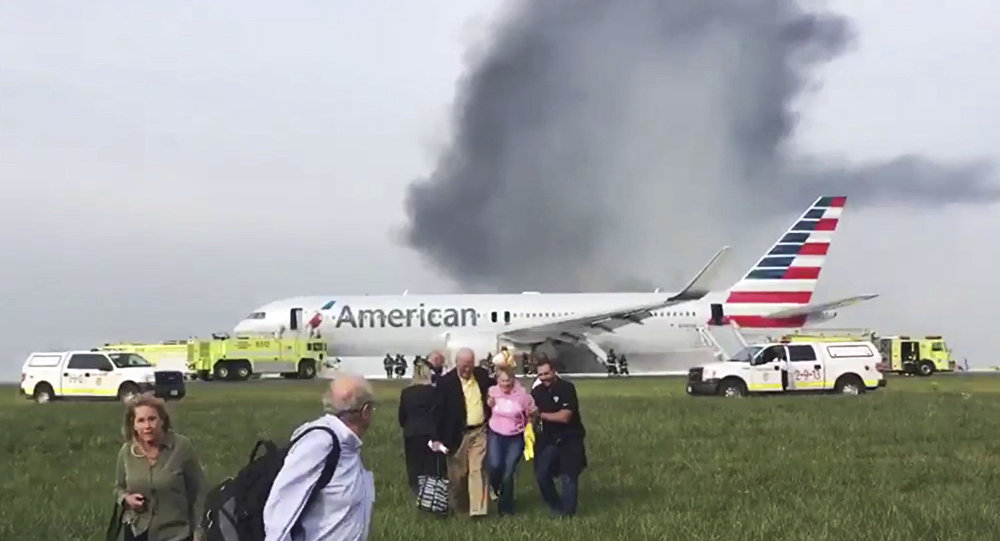 The latest footage from the control tower shows smoke rising from the right. Seconds later a fire erupts, causing an even larger black mass to billow from the plane’s side.

​Additional video from the Chicago Fire Department shows firefighters descending on the scene to apply fire retardant foam to the burning jet fuel.

​Bound for Miami, flight 383 was very close to taking off on October 28 when all of a sudden the Boeing 767-300 experienced an "uncontained failure," which then caused a fuel leak, leading to the sudden explosion below the bird’s right wing, a National Transportation Safety Board (NTSB) release noted.

At the time of the failure, the plane was traveling at a speed of 128 knots, roughly 148 mph, but “two to three seconds” after the engine came apart the takeoff roll was aborted, Anthony Kochenash, the plane’s captain, stated in his interview with NTSB.

In total, the fiery plane was brought to a halt 26 seconds after the first sparks flew.

After pilots ran through the "engine fire checklist," Kochenash recalled flight attendants informing them all 161 passengers were successfully evacuated from the plane. The captain added that once he exited the cockpit "[he] could not see more than about two feet," due to the "thick black smoke" enveloping the aircraft.

"I told [passengers] to remain calm," Shawn Ortiz, one of the flight attendants on the fateful day, said in the report. "I had my hand up, they were on top of me, but I could see they were not going to come close to the door."

While the NTSB is still investigating the incident, officials believe a failed turbine disk and punctured fuel line are to blame.