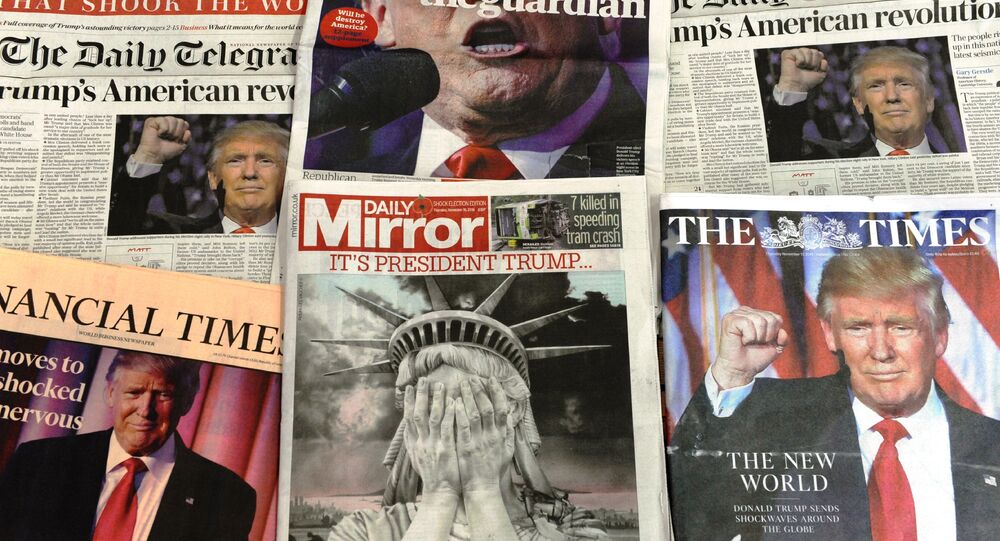 On Wednesday, the LaRouche political movement organized a rally to protest against the new US sanctions on Russia. Radio Sputnik discussed the issue with Marsha Mallouk, a LaRouche movement political organizer.

Members of the movement gathered in northwest Washington D.C. and distributed copies calling for an end to the sanctions.

The participants also called for a full investigation into false allegations that Russia hacked the Democratic National Committee as well as economic collaboration between Moscow and Washington.

© AP Photo / Charlie Neibergall
US Mainstream Media Totally Misses Clinton’s Collusion Link to Trump-Russia-Gate
“The accusations of collusion between President Trump and Russia are absurd, they are designed to force the US to continue the war drive ex-President Obama and Hillary Clinton had oriented us towards,” Marsha Mallouk said.

She added that just a week ago an assessment by a group of veteran intelligence professionals showed that indeed Russia had never hacked the Democratic National Committee and that the entire situation is a hoax designed to force the US and Russia back into confrontation.

"Every part of the US does not agree with the hysteria from the mainstream media. People want Presidents Putin and Trump to collaborate," Mallouk noted.

When asked in what way the new US sanctions on Russia could harm the United States, Marsha Mallouk said that the sanctions and increasing tension between the two nations is negative for the US and the entire world as it could lead to a nuclear confrontation between Russia and the United States.

She noted that some members of the US media community and some political groups overseas have been working to prevent collaboration between the US and Russia on ending the war in Syria, defeating Daesh, wiping out the global drug trade and ending global money laundering apparatus “which is primarily run through London and Wall Street.”

“These forces are very powerful; this is being organized through the former president Obama, Hillary Clinton as well as the forces around George Soros internationally.”

When asked about the future prospects of Russian-US relations in the near future and the risks and losses these tensions could bring to both nations and the whole world, she said that her hope was to bring about a new paradigm based on cooperation between Russia, the US and China to build a new world based on collaboration in space, nuclear fusion research and high technology infrastructure.

© Flickr / Dennis Skley
Anti-Russian Campaign in Mainstream Media Fueled by 'Russian Hackers' Hoax
“If you have Russia, China and the United States working together, the world will be a very beautiful and happy place.”

When asked about her movement’s plans in achieving these goals, Marsha Mallouk said that they were working in the US to educate the American people, about ending the drug trade that has killed half a million Americans over the past decade.

“There are 95 million unemployed people in the United States, the financial system is teetering on the brink on a collapse that will be worse than in 2008. The benefits for the US and the whole world would be enormous if we could restore full collaboration between the leading nations and it is clearly, the United States, Russia and China,” Marsha Mallouk emphasized.