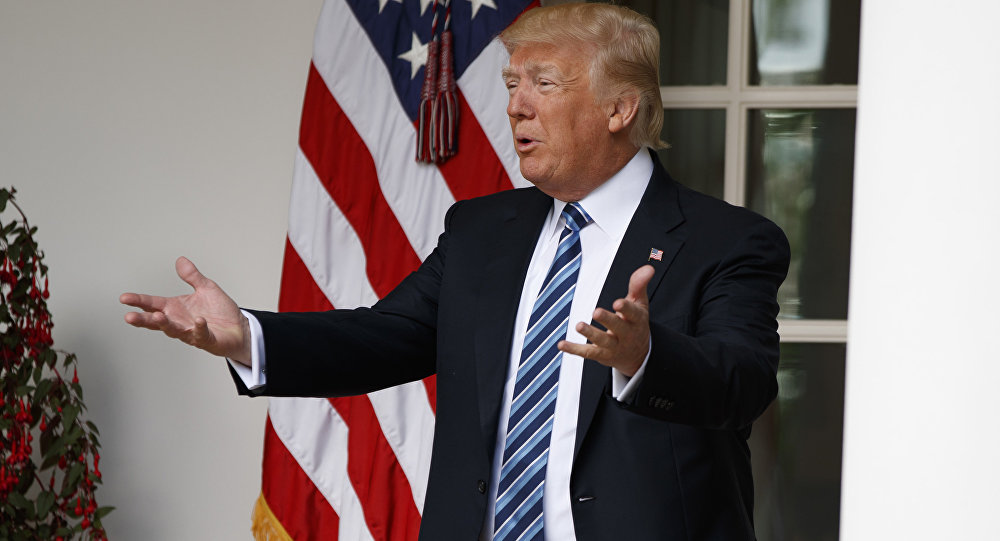 US President Donald Trump allegedly personally dictated a statement that was later issued by his eldest son, Donald Trump Jr., in which the president's son claims he had met with Russian lawyer Natalia Veselnitskaya to discuss adoption, US media reported.

© REUTERS / Maxim Shemetov
Russia Diplomatic Cuts, Trump Signing Sanctions May Spark 'Cycle of Retaliation'
MOSCOW (Sputnik) – According to The Washington Post newspaper, the president dictated the statement during his flight home after attending the G20 summit in Germany.

On July 8, The New York Times newspaper cited the statement when reporting that the adoption program was the main issue discussed at the meeting. On the next day, however, the newspaper reported that the president's son was initially promised potentially compromising information about then-Democratic presidential candidate Hillary Clinton.

Donald Trump Jr. subsequently changed his account of the events, now claiming that during the meeting, Veselnitskaya told him that she processed information about Russian individuals supporting Clinton's campaign. Only afterward did the lawyer turn to the subject of adopting Russian children, a practice which was ceased by a 2012 Russian law.

The president's son said it became clear to him that "the claims of potentially helpful information were a pretext for the meeting."

Mark Corallo, a spokesman for the president’s legal counsel, said that Trump was not present at his son's meeting with Veselnitskaya or aware of it.

The Washington Post cited presidential aides expressing their concerns that the president's participation in drafting the first statement might be interpreted as a conscious attempt to mislead the public. Advisers to Trump and his family reportedly told the newspaper that the president saw the investigation into his campaign's alleged ties to Russia as a political problem rather than a legal trouble.

The US Department of Justice is conducting an ongoing investigation into the alleged ties of Trump's presidential campaign with Russia. Former FBI Director Robert Mueller, appointed in May, is overseeing the investigation as a special counsel. The president has denied having ties with Russia.