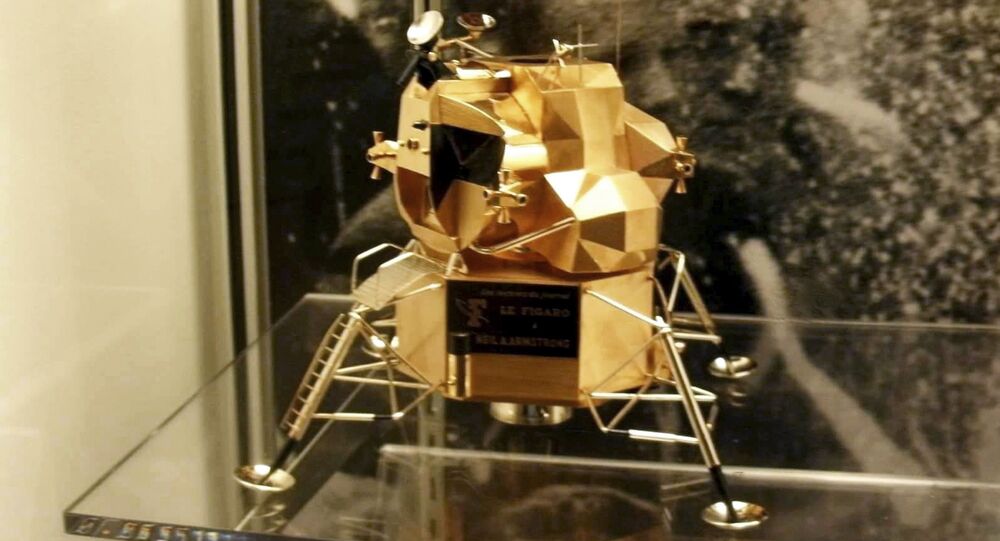 A solid-gold replica of the Apollo 11 lunar mobile has been stolen from an Ohio Museum, and there is concern that the 5-inch module could be melted down instead of being sold intact.

Authorities made their way to the replica’s display site after an alarm went off before midnight Friday at the Armstrong Air and Space Museum in Wapakoneta, Ohio, the hometown of Neil Armstrong, who in 1969 became the first human to set foot on the surface of the moon.

Armstrong and Buzz Aldrin, another astronaut aboard the Apollo 11, were presented with the module by French jeweler Cartier shortly after their return to Earth after the mission was complete.

Retired NASA agent Joseph Gutheinz Jr. pointed out that the burglars bypassed a moon rock from the mission that could’ve sold to a collector for millions of dollars. "Either they didn't have easy access to the moon rock, or they weren't into collectibles," he told the Associated Press, reasoning that "they were into turning a quick buck."

The museum closed for several hours on Saturday and posted a statement on Facebook, saying, "The truth is that you can't steal from a museum. Museum's don't ‘own’ artifacts. We are simply vessels of the public trust."

"Museums care for and exhibit items on behalf of you, the public. Theft from a museum is a theft from all of us. Three hundred people driving from across the country were robbed of their opportunity to experience the museum today. For every day that an item is missing, we are all robbed of an opportunity to enjoy it and our history."

Gutheinz said it would be a "damn shame" if the replica was melted down, and it would also make finding the thieves very difficult.

Another Apollo 11 artifact has been in the news lately, as a clerical error led to a NASA bag containing moon dust collected during the mission winding up in the hands of a Chicago area woman, who had to sue to get it back from the space agency after she sent it to be authenticated.

A judge ruled that although the bag should’ve never been placed at auction, NASA had no right to reverse the sale, and the bag was returned to the woman, who sold it at a Sotheby’s auction in New York for $1.8 million

Authorities aren’t able to pinpoint a value for the gold model. The theft is being investigated by local police with assistance from the Ohio Bureau of Investigation.