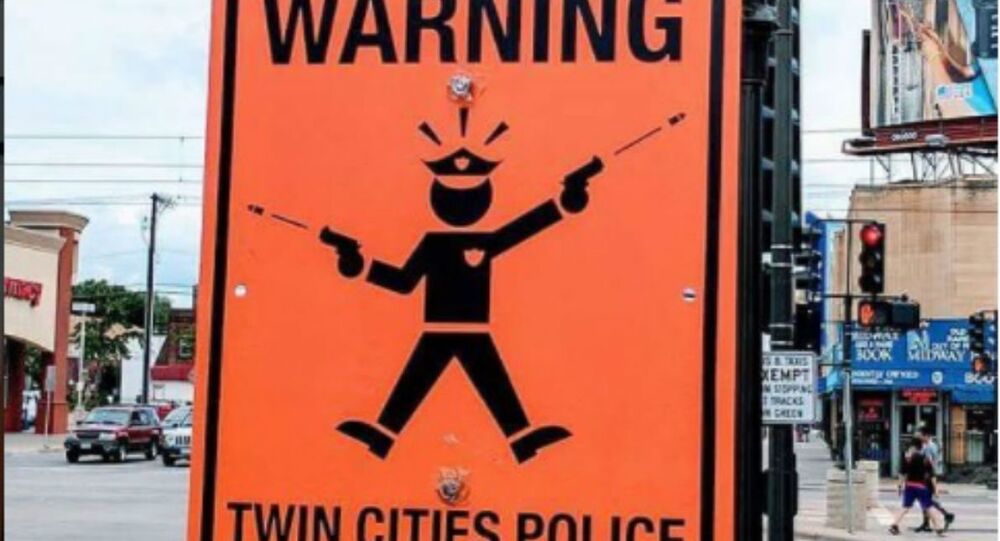 A sign mocking the Minneapolis Police Department appeared over the weekend following the shooting death of an Australian woman at the hands of a police officer.

The signs read, "Warning: Twin Cities Police easily startled," and were quickly removed by city crews from their posts in St. Paul and Minneapolis.

The messaging appears to reference an interview conducted by the Minnesota Bureau of Criminal Apprehension (BCA) with Officer Matthew Harrity, who said he and his partner Mohammed Noor were "startled" by 50-year-old Justine Damond, before Noor shot her through their squad car window, striking her in the abdomen.

Damond, a meditation instructor who was engaged to be married next month, died on the scene. Damond had called the police to report what she believed was a sexual assault taking place in an alley near her apartment.

She was shot while approaching the squad car, and Harrity’s lawyer said it was  "reasonable" for the officers to think they may be under attack. A recently released searched warrant said Damond "slapped" the back of the patrol car before being shot.

A Minnesota Department of Public Safety release said Noor declined to be interviewed by BCA agents.

Using heavy duty screws, the metal signs were mounted to street poles and were professionally painted. It is not clear who may be responsible for the signage.

One resident told the Minneapolis Star Tribune, "There’s a side of truth to the sign…That tells you there is something wrong with the system."

Minneapolis Police Chief Janeé Harteau resigned from her post soon after the shooting, citing Damond’s death as one of many contributing factors to her departure.

City Mayor Betsy Hodges asked Harteau to step down because she has "lost confidence in the chief's ability to lead us further — and from the many conversations I've had with people around our city, especially this week, it is clear that she has lost the confidence of the people of Minneapolis as well," according to UPI.

Hodges later wrote on Twitter, "For us to continue to transform policing — and community trust in policing — we need new leadership at [the Minneapolis Police Department]."

Noor, who is on paid leave for the duration of the investigation, had three complaints filed against him at the time of the shooting, including one woman who is suing him for  allegedly grabbing "her right wrist and upper arm" in a May incident.