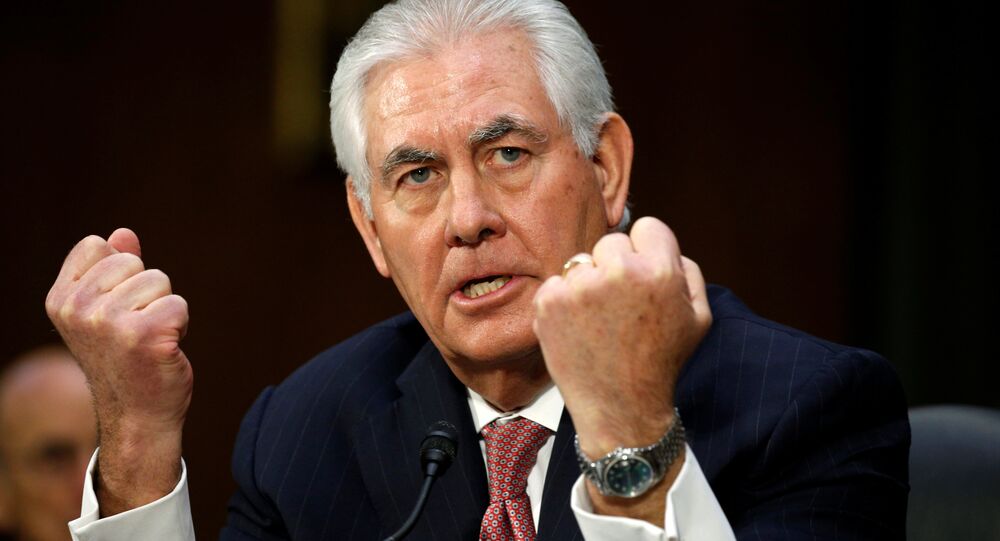 Which 'Perennial Problem' Might Force Rex Tillerson to Quit

On Monday, US media reported that US Secretary of State Rex Tillerson is thinking of leaving his post before the end of the year due to growing frustration with President Donald Trump's administration. Russian political analyst Dmitri Zhuravlev and former diplomat Sergei Ordzhonikidze explained to Sputnik what might have triggered this decision.

© REUTERS / Joe Skipper
Tillerson Rumored to Be Considering Early Resignation From State Secretary Post
Tillerson has a growing number of differences with the White House, including a new debate over US policy toward Iran, the CNN broadcaster reported on Monday.

Although the former Exxon-Mobil CEO was determined to stay in his post through the end of the year, two sources told the broadcaster over the weekend that they would not be surprised if he left sooner than that.

Sputnik Radio discussed the issue with political analyst Dmitry Zhuravlev, the director of the Institute of Regional Problems, who suggested that the US Secretary of State might be frustrated with the interference into his human resources policies.

"I think the key reason for his frustration is the interference into his human resources policies. As in many other countries around the world, the ambassadors in the US are being appointed by the president but report to the head of the State Department. This contradiction remains the perennial problem for any secretary of state under any president," Dmitry Zhuravlev told Sputnik.

With such a harsh and sweeping president as Donald Trump, he further said, this issue could become a real problem. Moreover that Rex Tillerson is not a professional diplomat and he is not quite familiar with diplomatic circles, which only complicates the situation.

© REUTERS / Joshua Roberts
Russia Should Brace for New Cold War if Tillerson Replaced With 'Hawk', MP Says
It becomes even more difficult given the limited freedom in the human resource policies, the political analyst said.

"Tillerson is a good negotiator, but what a top diplomat he is if he does not know his diplomats and, according to some information, does not particularly like them? But should we blame him for this or the one who actually appointed him to this position," Zhuravlev wondered.

In a separate comment on the issue, Sergei Ordzhonikidze, a veteran Russian diplomat who served as the director general of the United Nations (UN) Office in Geneva (2002-2011), deputy foreign minister (1999-2002) and currently heads the Russian Public Council for international cooperation and public diplomacy, explained to Sputnik that the decision of the US secretary of state might be caused by the unwillingness of the US Congress to allow him to implement his entrepreneurial ambitions in his relationship with Russia.

"As the former CEO of the large corporation Exxon-Mobil, Tillerson was interested in the development of maximum fruitful cooperation with Russia, what they were actually after in the north, in the Arctic region in particular,"  Sergei Ordzhonikidze explained to Sputnik.

"Business is business. They were very eager to gain colossal profits. Now, after the US Congress is eager to impose more sanctions on Russia, such cooperation will inevitably wind down. This can't raise any enthusiasm of Tillerson, who is the protégé of oil-industry circles," he added.

Sergei Ordzhonikidze also commented on the ongoing dispute over Russian diplomatic property seized by the US. Being a businessman, Tillerson realizes only too well what property rights are all about. He does not support the seizure of Russian property in the US, the former diplomat suggested.

"I think this and other examples contributed to his disputes with the White House. What foreign minister is he if he can't return the seized diplomatic property," he said.

© AP Photo
Tillerson Recertifies Iran's Compliance to Nuclear Agreement
Tillerson is unable to do what he desires, and that is to get back on track with developing a normal relationship with Russia.

"Surely he won't put in jeopardy any interests of the US or of American business. However the major idea of business is to gain profit, which he is unable to do.  The difference of a businessman from a politician is that he keeps in mind any way of making profit, be it in Iran, Russia or any other country. While a politician is more prone to ideology. He has a mentality of Barack Obama: let it come to my disadvantage, but I will never do it," Ordzhonikidze explained.

Tillerson is a very pragmatic person, he further said. He judges by what is profitable and what is not to the US. While the US Congress is ideology-driven down to the marrow. And it is impossible to build any relationship on the ideological basis.

Sergei Ordzhonikidze, however, did not rule out that the US secretary of state might have been made some interesting business offer.